A stylish Richmond home passed in with no bidding at auction on Saturday, as cautious buyers hesitate to pay too much in a falling property market.

Despite drawing a crowd, the renovated three-bedroom home at 17 Bellevue Street failed to secure a single bid, and has been listed for sale with a price guide of $2.9 million to $3.1 million. 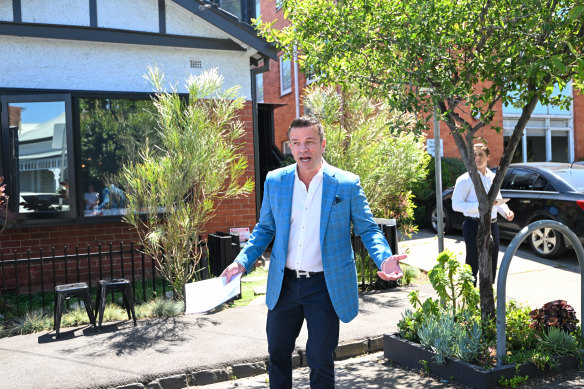 It was one of 989 auctions scheduled in Melbourne on Saturday.

The home in a quiet cul-de-sac had a stunning renovation by the current owners through Stonehouse + Irons design studio.

But when BigginScott Richmond auctioneer Andrew Crotty called for bids, no-one made an offer.

Instead of making a vendor bid, he passed the property in and turned to negotiations with the three interested parties, including downsizers, a young couple and an overseas buyer. 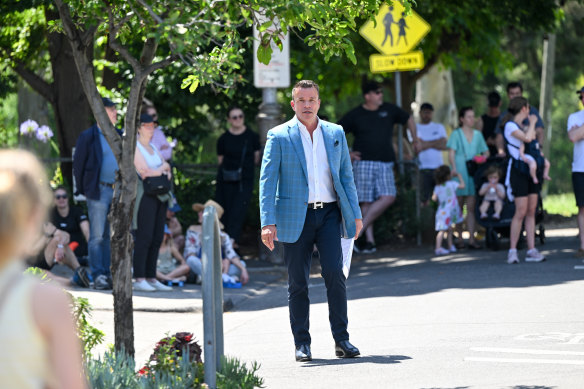 A crowd gathered, but no buyers raised their hands.Credit:Joe Armao

Crotty said it was not uncommon for homes to pass in amid the falling property market. Melbourne home values are down 7.1 per cent from their peak, CoreLogic figures released this week show, and the Reserve Bank is expected to lift interest rates for the eighth consecutive month at its meeting on Tuesday.

“This is the market where people are holding back,” he said, adding one of the interested parties is waiting on a home sale.

“Owners are reasonable with the reserve and they’re going to look at what happens.”

He said the reserve was within the price range, and expected the home to be sold within the next few days. 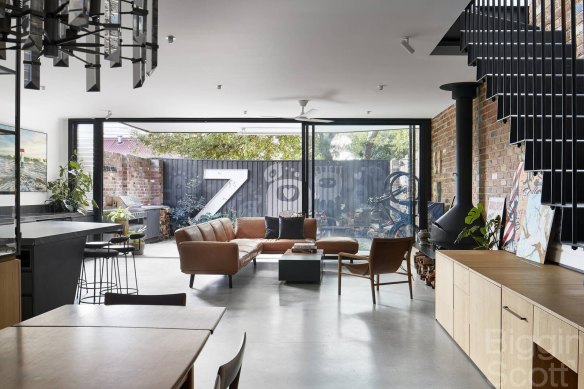 The home had a stylish renovation.Credit:BigginScott

He had sold three from four other properties at auctions this week, but said it was becoming more common to sell homes in post-auction negotiations.

Elsewhere, a family home in Camberwell had more success, selling for $3.51 million.

Four bidders competed for the four-bedroom house at 30 Fairfield Avenue, pushing the price above its $3.2 million to $3.3 million guide.

Abercromby’s selling agent Hamish Palmer-Hill said families with children heading into secondary school had been interested in the home for its second living area.

Bidding began at $3.2 million, and the house was called on the market at $3.48 million, he said, adding that another recent sale in the street for about $3.45 million had provided a comparison for interested buyers.

“There’s a few people wanting finality before the end of the year,” he said.

“In these areas where people have a bit more equity built up, things are selling a bit easier.”

In Carlton, near the Lygon Street restaurant strip, a four-bedroom home held in the same family for more than four decades sold to an investor post-auction, after it was passed in.

Nelson Alexander’s Stephanie Hawke said the new owner will rent it out for now and move in later.

“This property was unique, so it was an easier negotiation,” she said.

Her team had three properties set for auction this weekend and sold two last night. She added that it was common to see two serious buyers per property now, whereas a year ago, there may have been four.

“Heading into Christmas there are a lot of buyers that are seeing great value in the market,” she said.

Also in the inner north, a four-bedroom single-fronted terrace in Fitzroy North passed in at auction on a vendor bid of $1.7 million.

Nelson Alexander’s David Sanguinedo said his two previous auctions sold well, but both of his auctions on Saturday passed in.

“There’s definitely buyers around, things are selling and there is no more stock coming on between now and Christmas,” he said.

“Buyers are going to have to wait until February [if they don’t buy now].”

He felt concern from buyers around interest rates had settled compared to when the Reserve Bank began to lift the cash rate in May, and he would watch the bank’s guidance in its last meeting of the year on Tuesday.

In Port Melbourne, a renovated two-bedroom Victorian is also still available after passing in at auction.

Belle Property Albert Park’s David Wood placed a vendor bid of $1 million for 204 Albert Street but did not receive bidding above that.

“Buyers are there but they are cautious. Some buyers are taking a real wait-and-see attitude,” he said.“Others are ready to buy, but there is not the stock [available].”

He said there was a feeling in the market that interest rate rises were getting close to the end of the cycle.

“Almost all the houses, if they aren’t sold at auction, are probably getting offers in the 14 days afterwards,” he added.

Most Viewed in Property