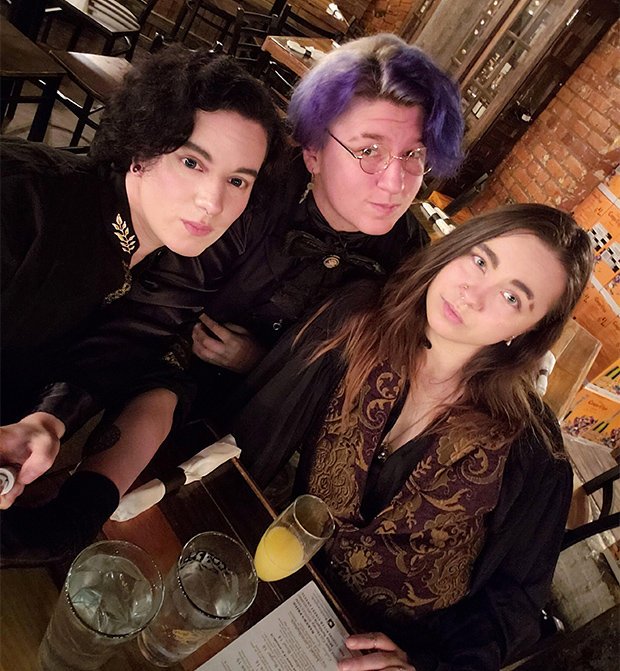 Xanthe added: “A couple of years ago I decided to get HRT which definitely helped.

“I got top surgery. And I’m satisfied with myself.

“It’s been a journey to get here and it’s a relief to not be constantly uncomfortable and not constantly try to hide certain aspects of myself.”

Rowan, who is in a polyamorous relationship with Xanthe’s shared boyfriend Seran Janiszewski, has also undertaken a mastectomy.

The trio recently enjoyed a day at the beach together – where Xanthe an Rowan bared their surgery scars for the first time. 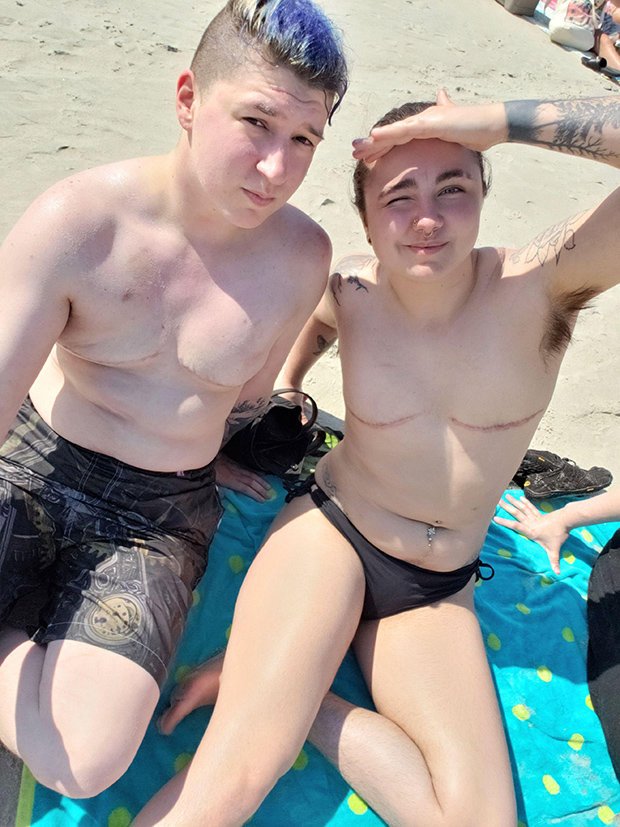 Xanthe remembered: “It was supposed to be a bit of a family vacation – it was the happiest I had been in months. I am actually only recently post-op.

“My friend Rowan was a little bit more nervous than I was but we went ahead anyway and endeavoured to make sure we would stay by each other and also be shirtless.

“That was Rowan’s first time being shirtless at the beach too. No one said anything.

“We may have gotten a couple of weird looks but I think most people just assumed it was none of their business, which was great.”

Xanthe shared photos from the day on social media and added the caption: “Here I am, at the beach, shirtless, with the equally non-binary friend that helped me through my top surgery while recovering from theirs, while we watch our boyfriend frolicking in the waves.

“This is the world conservatives warned you about.”

The images received a positive response, racking up more than 6,250 likes, shares and comments.

The LGBT+ activist is chuffed that so many people were supportive of the pictures.

They said: “I felt great about being in public. Honestly it felt very natural.

“I didn’t expect that much positive feedback from the picture.

“I expected 50/50 as far as that went but probably about 30 per cent has been negative but the rest has been overwhelmingly positive.”

Xanthe added: “It was definitely was a moment I wanted to broadcast.

“I was so excited about it. It’s definitely one of the more interesting pictures in the family photo album.

“I don’t regret posting it at all. I’m really glad I did.

“Other people have gotten in touch saying they were really glad I did too because they’ve been nervous about going to the beach or saying they’re non-binary than a binary entity.

“It’s cool for people to actually have some representation.

“My logic was there so many people sharing beach photos online and now sharing their day and the loved ones they are with, and they can be public, so so can I.”