Home » Lifestyle » Nordstrom is selling a $740 jacket with attached gloves, and people are writing sarcastic reviews about ridiculous ways to wear it

Nordstrom is selling a $740 jacket with attached gloves, and people are writing sarcastic reviews about ridiculous ways to wear it 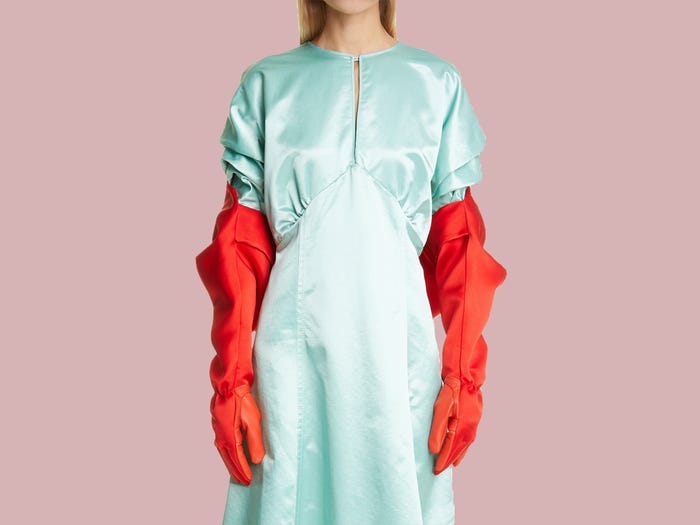 Statement gloves are always popular during the winter season, but one designer pair is raising eyebrows for a different reason.

At the time of writing, Nordstrom is selling a $740 red bolero with an attached set of elbow-length gloves. The short jacket was created by Belgian designer Meryll Rogge and is made from satin and lambskin leather, according to the product's description page.

But while Nordstrom's website says the design "evokes the golden era of Hollywood," people online are arguing that it actually gives off a "serial-killer-chic vibe."

Numerous people said on Twitter that they repeatedly saw the jacket in Facebook advertisements and targeted Nordstrom recommendations this weekend.

As the jacket and gloves became a meme on Twitter, people began to leave sarcastic reviews for the garment on Nordstrom's website

At the time of writing, Meryll Rogge's double-satin bolero has received more than 50 reviews on the retailer's website, with approximately 47% including a five-star rating.

Many of the high reviews also include suggestions for ridiculous — and likely sarcastic — ways to wear the jacket.

"I bought this for the designated dishwasher of our dirty Thanksgiving dinner dishes this year," one reviewer wrote. "The red is the perfect signal to know where to take those plates and the gloves offer protection from all that drying dish detergent. Will carry over into Christmas festivities as well."

"If 2020 were a dress," another person said. "Straight from the pandemic to the gala. Easy peasy."

Others who jokingly gave the jacket-and-gloves combo a one-star rating included their thoughts on why they wouldn't purchase such a garment.

"Listen, I am always on the hunt for my Serial Killer Chic vibe," one reviewer wrote. "But we all know that silk is impossible to clean! It's way too risky for my purposes, especially at this price. I'm going to have to stick to rubber gloves."

"I thought these would be perfect for my exotic animal dentistry practice, but alas, they did not offer my hands and arms the protection that I need for flossing rhino teeth," another person said.

While it's unclear if any of the reviewers actually purchased the jacket, or are considering it, there's no doubt that the garment is growing in popularity. Nearly 10,000 people are viewing it on Nordstrom's website at the time of writing.

Representatives for Meryll Rogge and Nordstrom did not immediately respond to Insider's request for comment.