Nurses are working on a volunteer basis and fundraising to keep a program running for patients diagnosed with rare diseases after the federal government failed to fulfil an apparent election promise to renew its funding last month.

More than 3000 people have received care through the Patient Pathways Program, which funds and trains specialist nurses for 10 charities, including Crohn’s & Colitis Australia and the Mito Foundation, on the basis that people with a new diagnosis often first seek help from a non-profit organisation. 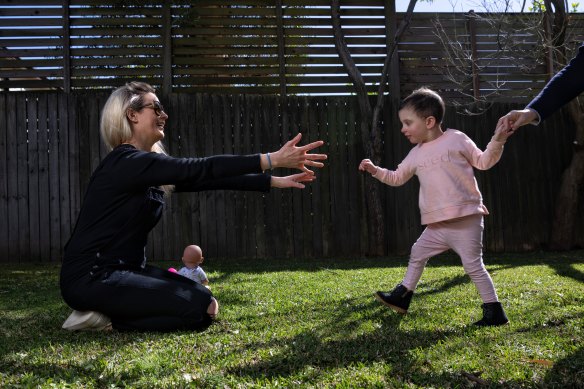 Arabella Thompson with her daughter, Luci, who has a rare vascular condition.Credit:Nick Moir

“When you’re in trauma and you don’t know where to go, a service like this can be your brain: they say, ‘I will do this, I will do the research’,” Arabella Thompson said. She was connected with a Pathways nurse when her three-year-old daughter Luci was diagnosed with moyamoya disease, a rare vascular disorder that affects blood flow to the brain.

The telehealth program has provided 25,000 interventions, assessments and referrals, including to specialist services and clinical trials.

The Centre for Community-Driven Research (CCDR) received $1.8 million in 2019 to run a three-year trial of the program, with a promise of an additional $150,000 to cover costs for three months during an evaluation of the trial, to assess if the program should be expanded to 18 charities.

In March, then shadow health minister Mark Butler said Labor would fund the expanded program and provide $2.47 million over a further three years when the initial funding ran out in June, without the condition of a further evaluation. He described the program as a “relatively modest” investment, delivering “really strong outcomes”.

But the CCDR, which understood that to mean the program would be funded from July, has since been advised the funding will not be finalised until the October budget, with money not due to arrive until January.

Dr Catherine Holliday, chief executive of the CCDR and the program’s joint co-ordinator, said it was “disappointing” the extension hadn’t been funded, adding the election commitment “really meant a lot” after Butler had spoken so positively about the benefits of a program led by nurses.

“Running a health service is a complex undertaking and we had worked really hard to make sure we were ready for implementation on July 1,” she said.

A spokesperson for Butler’s office said it still intended to provide the $2.47 million – through the October budget.

“The government remains committed to implementing the election commitment to fund support for patients with rare and complex diseases to better navigate the health system,” the spokesperson said.

The $150,000 approved by the former government now needs to cover six months of operation, not three, and eight additional patient organisations have already been lined up to take part in the program.

Holliday said the expansion was going ahead regardless and nurses joining the program had agreed to volunteer their time as the CCDR seeks donations from the public.

“The nurses have been amazing; they just want to help. We’ve asked people to put their hand up and they have,” she said.

The CCDR has also written to Butler’s office saying it would source $1 million of the government funding through fundraising, which would be used towards its costs in administering the program. Holliday said it hoped this offer would result in the rest of the funds – for the charities in the expanded program – being provided sooner.

The spokesperson for Butler’s office said it was aware the CCDR was “no longer seeking government funding” for its own costs.

“The health minister has directed the [federal Department of Health] to identify the best way to deliver these services, working directly with the range of organisations supporting people with these rare, genetic and complex conditions, for announcement in the budget,” the spokesperson said.