Home » Lifestyle » One fantasy show to rule all others? That would be The Wheel of Time

One fantasy show to rule all others? That would be The Wheel of Time

It’s too easy to miss brilliant streaming shows, movies and documentaries. Here are the ones to hit play on or skip. 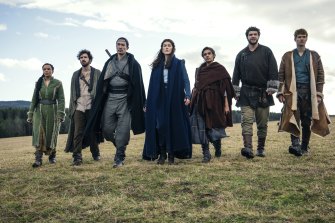 The Wheel of Time is set in a world where men have stuffed everything up and magic is aggressively policed by an order of female magic-users known as the Aes Sedai.Credit:Amazon Prime

This handsome and expensive-looking new television adaptation looks like doing them justice, even as it highlights certain similarities to J.R.R. Tolkien’s famous doorstopper. What similarities? Well, in the first batch of three episodes we met the Gandalf-like figure of Moiraine (Rosamund Pike), a powerful magic-user on a mission to rescue four young know-nothings, one of whom might unknowingly be in possession of a magical power that could save or destroy the world. That power is also being sought, naturally enough, by a shadowy evil entity that sends out malevolent, black-robed riders backed by an army of bloodthirsty beast-men. So far, so familiar.

But it’s the more original aspects of the setting that are most intriguing. This is a world where men have stuffed everything up (imagine!), and so the use of magic is aggressively policed by an order of female magic-users known as the Aes Sedai. But even within the Aes Sedai there are stark differences of philosophy, as we see in the latest episode, written by Game of Thrones veteran Dave Hill and directed by Wayne Yip (who is also involved in the new Lord of the Rings series).

Now that the Aes Sedai have captured an immensely powerful male magic-user – who claims to be the reincarnation of the very power everyone’s looking for – Moiraine reveals herself to be a by-the-book sort determined to drag him all the way back to HQ for trial.

The more hardline Liandrin (Kate Fleetwood) fears they won’t be able to keep him contained and so favours a spot of extra-judicial execution. Our young pals, meanwhile, remain scattered. So much so that Perrin and Egwene (Marcus Rutherford and the ever more-impressive Australian Madeleine Madden) have taken up with a group of Romani-like travellers. 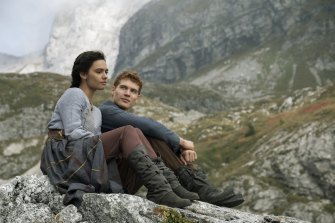 Australian actress Madeleine Madden is impressive in The Wheel of Time.Credit:Amazon Prime

The whole production looks terrific, from the spectacular magic and monster effects to the mercifully soft lighting (medieval interiors weren’t really lit up like operating theatres). The evocative Central European locations offer easy access to things like castles and … er … brightly painted Romani caravans. The callow youth of the protagonists gives things a slight young-adult vibe, but fantasy fans will still be in their element. 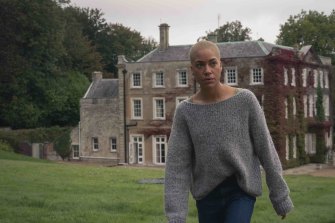 Cush Jumbo plays a grief-stricken mum who takes up the mystery around her son’s death in The Beast Must Die.Credit:Gareth Gatrell/AMC

“I am going to kill a man. I don’t know his name. I don’t know where he lives and I have no idea what he looks like. But I am going to find him and kill him.” So swears grief-stricken mum Frances Cairnes (Cush Jumbo), beginning her own investigation after her six-year-old son is killed in a hit-and-run accident on the Isle of Wight.

Who’s the guilty party? Unless there’s a twist coming in this tense five-part thriller it looks like being rich rotter George Rattery (middle-aged man-of-the-moment Jared Harris). He’s certainly a dangerous driver and a nasty piece of work.

But to be sure Frances is going to have to infiltrate his household, which includes his snooty sister (Geraldine James), fragile wife (Maeve Dermody), frightened sister-in-law (Mia Tomlinson) and bullied teenage son (Barney Sayburn). All this while dodging a detective (Billy Howle) who is struggling with the investigation and with his own recent trauma.

It’s brilliantly set up and brilliantly cast – Jumbo and Harris are both hugely compelling presences who make a fine cobra and mongoose. 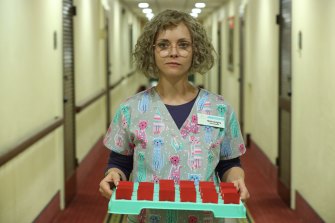 Christina Ricci is a survivor of a plane crash in Yellowjackets.Credit:Paramount+

When a plane carrying a girls’ soccer team crashed in the Canadian Rockies, some serious Lord of the Flies stuff went down – lots of bright crimson got splashed across that pure white snow. Now, 25 years later, survivors played by Melanie Lynskey, Juliette Lewis, Christina Ricci and Tawny Cypress are going to have to confront that long-buried ugliness as it bubbles to the surface once more.

This rambunctiously dark and anti-historical comedy from Australian playwright Tony McNamara has returned in brilliant style. The botched attempt by the pregnant Catherine (Elle Fanning) to assassinate her cruel hubby, Peter III (Nicholas Hoult), initially led to a bloody stalemate of a civil war within the hastily partitioned imperial palace. Now, though, events are moving along with the pace and unpredictable trajectory of the severed heads that the children have been kicking around the palace grounds. Delightful madness of a singular sort. 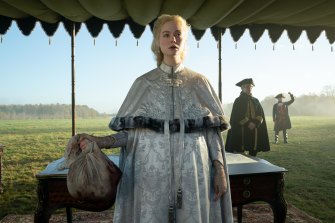 Elle Fanning in The Great, which returns in fabulous style for a second season.Credit:Stan

When you cut a head off a hydra, you tend to get a bunch of new heads. This is increasingly clear to US DEA agent Walt Breslin as a new season begins with new cartels sliding towards the first explosion of the drug violence that has killed hundreds of thousands of Mexicans over the past 30 years. As always, the series is made with great style, panache and respect, and there’s a sinking feeling whenever a new innocent enters the frame, be she a teenage girl or an intrepid reporter. 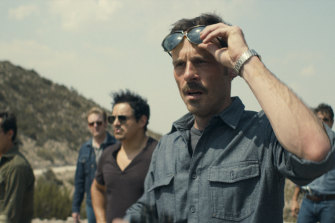 Walt Breslin is a special agent hunting down drug cartels in Narcos: Mexico.Credit:Netflix

Stan is fast-tracking the latest season – the fifth featuring the settled line-up of comedian Paddy McGuinness, racing driver Chris Harris and cricket legend Andrew Flintoff. Things got off to a terrific start with the three of them fanging a McLaren, an Aston Martin and an Alfa Romeo around Silverstone and seeing how their times stacked up against F1 drivers in the same cars, and with McGuinness organising a spectacular tribute to paralysed daredevil Eddie Kidd. There are plenty of Jeremy Clarkson-era seasons, too.

*Stan is owned by Nine, the owner of this masthead.