Even before he heard his name on the nominations telecast Monday morning, Bong Joon Ho, the Korean director of the six-time Oscar-nominated Parasite and a master of foreshadowing and suspense, spied what might have been a clue about his movie's ultimate fate.

One of the people tasked with reading the nominations, actor John Cho, was Korean-American. Was it a coincidence? Or an indication of – and face-saving concession to – the inevitable? 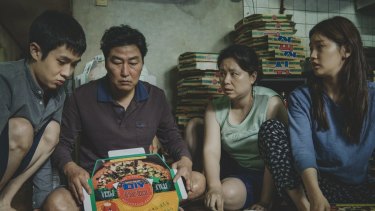 Either way, "he pronounced all of our names correctly," a grateful Bong pointed out through a translator, in a phone interview Monday afternoon from Los Angeles. "So that was memorable."

Parasite, a hair-raising modern fable about a poor family and a rich family who become unusually entangled, has been shattering expectations since it won the Palme d'Or at Cannes last year, becoming the first South Korean film to do so.

Later, it convinced even subtitle-averse Americans to go to the box office, earning over $36.2 million at US theatres. At the Australian box office, the film earned around $2.23 million. As the first Korean film to be nominated for a best picture Oscar (Parasite also received nominations in the directing, original screenplay, editing, production design and international feature categories), its global success is being hailed as a testament to the growing stature of that country's long film tradition.

For Bong, who won admiring comparisons to Steven Spielberg and Sidney Lumet for his earlier films (including Memories of Murder and The Host), and international audiences with later works (Snowpiercer and Okja), the nominations are the cherry on top of an extraordinary year.

"[It is] the first time something like this has happened, so I don't even know how to process or compare my emotions," he said. "But, of course, it's great."

The 92nd Academy Award nominations, announced on Tuesday (AEST), also saw Australian actress Margot Robbie snare a nomination for best actress in a supporting role thanks to her performance in Bombshell.

Joker, last year's controversial film about the infamous Batman villain starring Joaquin Phoenix, earned the most nods of any film. It scored 11 nominations – including best actor in a lead role, best director and best editing. Quentin Tarantino's One Upon a Time in Hollywood, mob drama The Irishman and World War 1 epic 1917 weren't far off with 10 nominations each. Like Parasite, all four of those films are in the running for best picture – alongside Taika Waititi's comedy Jojo Rabbit, Little Women, Marriage Story and Ford v Ferrari.

No women were nominated for best director this year, while Jennifer Lopez's performance in Hustlers and Beyonce's song Spirit from The Lion King remake were similarly snubbed.

This year's ceremony will air in Australia on Channel Seven after the broadcaster nabbed the rights from fellow free-to-air broadcaster Nine. The 92nd Academy Awards will be televised live from 12pm on Monday, February 10.