Parenting experts reveal EXACTLY when your child's bedtime should be

Parenting experts have revealed when exactly your child’s bedtime should be depending on their age.

For toddlers, Angela Cain, Children & Teens Therapist at Zoe Clews & Associates, suggested that they need between 11 and 14 hours of sleep, including naps in the day, while three to five year olds require 10 to 13 hours of good night’s sleep.

Meanwhile, 14 to 17 year olds should apparently be heading to bed no later than 10pm, and avoid keeping electronic equipment such as phones in their bedroom before heading off to sleep.

Here, FEMAIL reveals the bedtimes you should be setting for your children, according to the experts… 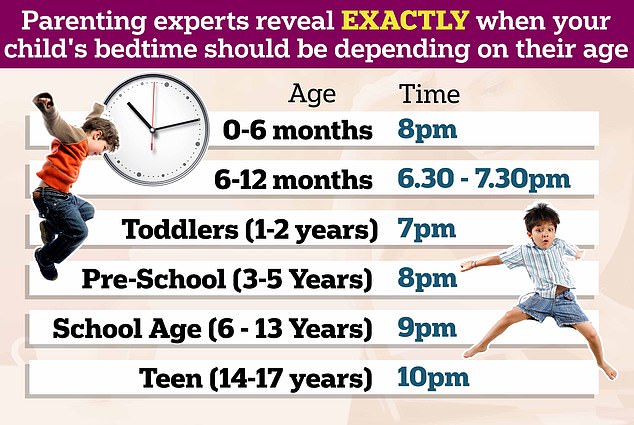 The amount of sleep that children need is largely dependent on their age. Parenting experts tell FEMAIL exactly when children should be going to bed (stock photo)

Eve Squires, the founder of Calm & Bright Sleep Support, co-author of Love To Sleep and a sleep expert at The Baby Show said: ‘Once born, babies spend the vast majority of their time sleeping.

‘In the first half year of life, babies will sleep between 14 and 17 hours a day, fragmented into small bursts to allow for frequent feeding.

‘In the first 6 months of life it is normal for bedtime to be much later than parents might expect, with them often going to bed at the same time as the baby.

‘Night sleep is likely to be broken and unpredictable, with frequent night waking and feedings and short naps.’

‘At this age, sleep serves as a service to the brain; allowing for immense neural development and creating space for new learning to take place.

‘Healthy babies are capable of sleeping a solid 11-12 hours sleep at this stage. That is not to say they should, although family life is certainly more peaceful when they do.’

Angela explained: ‘Toddlers need the most sleep – somewhere between 11 and 14 hours of sleep, including daytime naps.

‘A good night time routine instils a healthy pattern of behaviour for sleep – so ideally bath time should always be between 6pm and 6.30 pm, followed by a calming bedtime story.

‘Lights out should be 7pm, meaning they should wake refreshed at 7am. A couple of one hour naps throughout the day meets the recommended sleep for optimal development.’

Eve added: ‘It is very normal at this age for sleep to remain broken or a battle, with bedtime negotiations taking some parents hours. Sleep can be worked on with parents’ consistency and commitment so that sleep needs can be met.’

‘Curious and active pre-schoolers need 10 to 13 hours of sleep’, insisted Angela. ‘As daytime naps are phased out, they can become irritable towards the end of the day.

‘Create a routine that allows their mind to settle, starting with bath time again between 6pm and 6.30pm.

‘You can follow this with maybe a little television for 15 minutes, a bedtime story and then lights out at about 8 pm, allowing them to wake ready for the day sometime after 6am.’

Eve said: Sleep remains just as important in this age bracket, with children needing 9-11 hours a night to reach their full potential.

‘Sleep is needed to keep up with the demands of a busy school and home life. Adequate sleep lays the foundations for learning to occur, friendships to be made and kept, immunity to strengthen, and emotional regulation.’

Angela said: ‘Sleep is good for the brain, so the recommended amount of sleep for this age group is roughly 9-12 hours a day.

‘Older children still need a routine, but the elements (like bedtime stories may change). Bedtime should be between 8pm and 9pm depending on where they are in the age bracket.’

‘These are the notoriously tricky years for both parents and children’, warned Angela. ‘That’s why keeping a healthy sleep routine is key to navigating it.

‘A good habit to get into is the removal of all electronic equipment from the bedroom to remove the temptation to check social feeds.

‘Bedtime should be between 9pm and 10pm – but they should create their own bedtime routine, allowing them to wind down whilst also encouraging independence.’

‘If teens must nap, as many do after returning from school, they should be limited to 20 minutes to avoid day/night confusion or insomnia,’ insisted Eve.