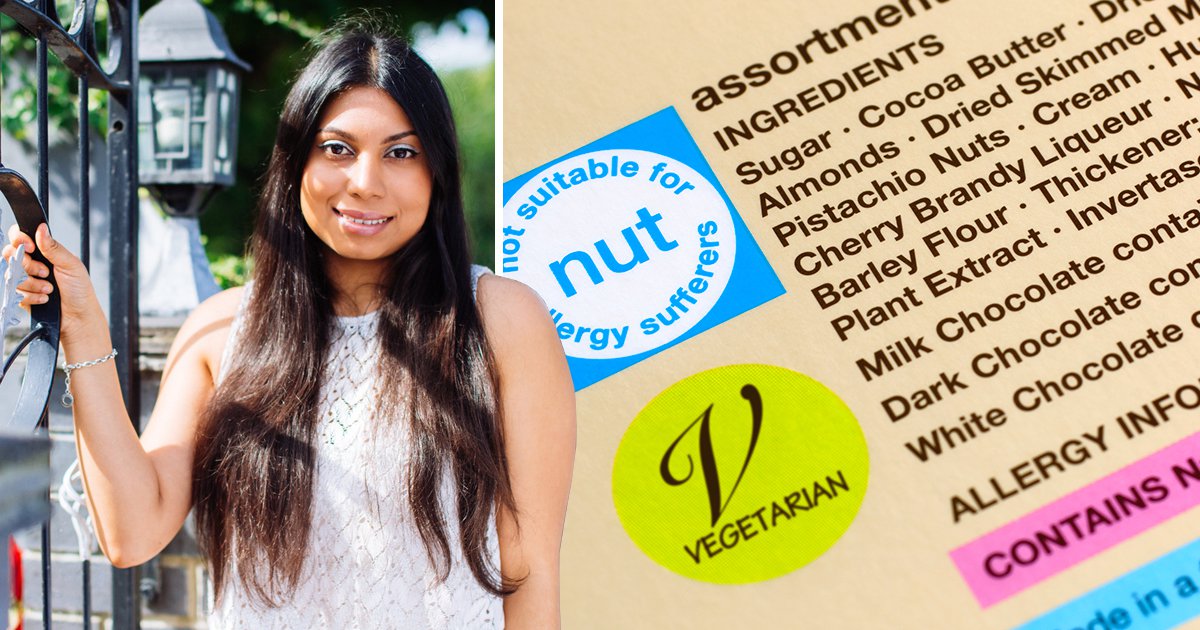 From October 2021, food businesses will have to include full ingredient lists on pre-packed foods to protect those with allergies while they’re eating out.

The policy has been named Natasha’s Law, in memory of teenager Natasha Ednan-Laperouse, who died after an allergic reaction to a Pret a Manger baguette.

The law change follows a tireless campaign from her family, and will make a difference to millions of people with allergies who have welcomed the steps.

Natasha had anaphylaxis, a severe and life-threatening reaction to an allergy, and other sufferers have the most to gain from the upcoming changes.

However, some allergy sufferers have told Metro.co.uk that while this is an important victory, there is still work to be done.

Eating in restaurants, ordering a coffee or even attending events can be a massive challenge that leaves allergy sufferers feeling left out and unsafe.

Anna Ford says eating out with her five-year-old son, who is allergic to eggs and peanuts, is like ‘Russian roulette’.

‘On holiday in Dorset, we were looking for somewhere to give the kids tea and it took five different attempts to find somewhere safe,’ she tells Metro.co.uk

‘Businesses are missing a trick because allergy customers are very loyal and will return again and again to outlets they trust.’

Alexa Baracaia agrees. She is a journalist, the author of upcoming book My Family and Food Allergies: the all you need to know guide, and mum to a 10-year-old with egg, sesame, and peanut allergies.

‘There is no such thing as spontaneity,’ she explains.

‘We can’t just pop out for a quick lunch or stop off for a treat. Every meal needs to be prefaced with lots of checks and preparations. Trying somewhere new means multiple phone calls and emails in advance.’

Hospitality staff who don’t take allergies seriously can also be a real problem.

Jo Keeling is allergic to peanuts and almonds. She has had several bad experiences.

‘There was one meal with my boyfriend where I had spoken to the waiter several times,’ she tells us. ‘He assured me there were no almonds, but when my food arrived, there were almond flakes.

‘He wasn’t even apologetic and asked “what’s the worst that could’ve happened?” I told him ‘I could’ve died and that wouldn’t be good for business!’ – I made a joke out of it, but actually I was really upset.’

‘If I ask for oat milk, they will sometimes put it in the same jug as almond milk but I am severely allergic to almonds,’ explains Julianne Ponan, who runs a company that makes nut and gluten free snacks.

‘The tiniest amount of any of the things I am allergic to could be fatal.’

Sarah Chapman is severely intolerant to milk, so is also sure to watch baristas closely if she ever orders a coffee outside her home.

But having a serious allergy doesn’t just make spontaneous outings hard, it can also stop a person taking part in special family occasions.

‘Weddings are difficult too,’ Sarah, who also has a son with allergies, tells us.

‘One reception was a church tea party. There was no way we could risk it so I made a picnic hamper with safe food and sandwiches – and I had to have our own corner of the kitchen to cut and serve our food.’

There are questions about how restaurants and other food outlets can better cater to allergy sufferers.

Opinion is divided. Journalist and author Alexa doesn’t think labelling every items on restaurant menus is the best way forward, though it might help raise awareness.

‘It’s an incredibly onerous task, especially in small independent places whose menus change daily,’ she notes. What’s more important is that all staff are fully trained and aware, and that a restaurant has a system in place to deal with allergy orders.’

However business owner Julianne thinks that allergy sufferers should be able to read separate menus with full ingredient lists.

‘That information should also be available online,’ says Anna. ‘It would mean you could check whether a menu has safe options before you book, and then double check when you’re there.’

Whatever the answer, what’s clear is that we need to be taking allergies more seriously.

As Anna puts it: ‘It’s just bad business to be sloppy or complacent about allergies.’