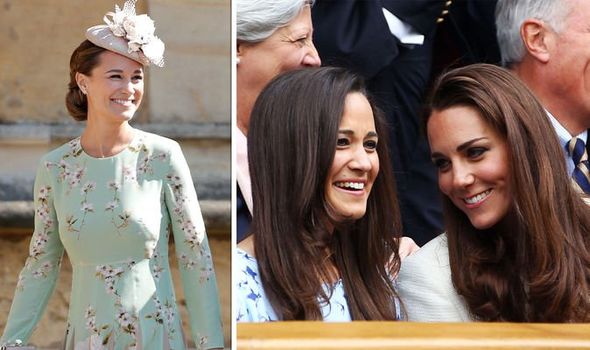 Pippa Middleton and James Matthews welcomed their second child in March 2021 and they decided to call her daughter Grace Elizabeth Jane.

Pippa Middleton decided to honour her sister the Duchess of Cambridge as she chose Elizabeth for her daughter’s middle name.

Elizabeth happens to be the Duchess’s middle name too.

However, this is a tradition that has run in the Middleton family for generations as Kate’s daughter Charlotte has the same middle name.

Princess Charlotte also has the name Diana in memory of Prince William’s late mother, the Princess of Wales.

It is a royal tradition to pass the royal names to children, but using Elizabeth as a middle name was a long-running tradition for the Middletons before Kate joined the Royal Family.

The name has been passed down the generations, resulting in Kate, Charlotte and Grace’s middle name.

Ruth Pritchard, Pippa and Kate’s great-aunt, commented on Grace’s middle name saying she was “thrilled” the family tradition had continued.

“The name has been in my family for generations and is very important to us.

“My mum was much loved by her family, was devoted to Dad and us children, and always did the best for us,” she told the Daily Mail.

Pippa Middleton’s first child, Arthur, shares his name with one of the Duchess of Cambridge’s children.

Prince Louis, Kate and William’s third child, has the middle name Arthur and was born a few months before his cousin.

The name Arthur is also a tradition in the Royal Family as Prince William and Prince Charles share that same middle name, as well as being the Queen’s father’s name: Albert Frederick Arthur George Windsor.

Prince Harry and Meghan Markle also honoured the Queen with the name of their daughter, Lilibet Diana.

Lilibet is Queen Elizabeth’s nickname used by her family.