You know Christmas is coming whenever controversy flares in the UK over The Pogues' song A Fairytale in New York. It's almost as traditional as turkey.

This year's roasting comes as the BBC decides against playing the original 1987 recording in favour of a modified version in which the words "faggot" and "slut" are no longer heard. Inevitably, it has drawn both praise and condemnation, stoking debates over artistic freedom and cultural sensitivities. 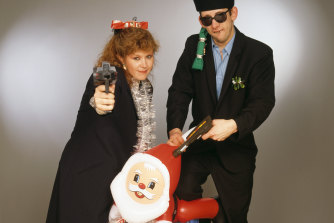 Kirsty MacColl and Shane MacGowan’s duet on A Fairytale of New York has provoked strong responses for more than 30 years. Credit:Getty Images

A regular favourite in the end-of-year UK charts since its initial release – it has made the top 20 every year since 2005 – the song features vocalists Shane MacGowan and Kirsty MacColl trading insults as a pair of washed-up Irish-American Broadway performers in the 1940s.

"You scumbag, you maggot, you cheap lousy faggot," she spits. "Happy Christmas your arse, I pray God it's our last."

Well, it might be the last time listeners to the BBC's youth-skewing Radio 1 hear it for a while, with the station responding to hundreds of complaints last year by opting to play a remastered version in which MacColl sings "you're cheap and you're haggard" in place of the offending line, while MacGowan's insult is slurred.

Despite the inevitable complaints of "political correctness gone mad", the BBC's position does not amount to censorship: Radio 2 (which skews older) will still play the original version, while Radio 6 presenters will be able to choose for themselves.

Nonetheless, the call has been met with derision by some, with actor and musician Laurence Fox, leader of the UK’s Reclaim Party, decrying it as "the cultural commissars at the BBC … telling you what is and isn't appropriate for your ignorant little ears".

The Pogues, however, seem utterly unperturbed. The band’s official response on Twitter was to tell Fox to "f— off you little herrenvolk shite" (implying he is a Nazi), and to endorse Vice writer Harrison Brocklehurst's observation that while the lyrics cause him no offence, "straight people being so angry and outraged at its removal and literally fighting and arguing for the right to sing it bothers me deeply".

The lyrics have been controversial ever since the song debuted in November 1987, with the BBC bleeping a number of words and asking MacColl to sing the supposedly less offensive "ass" in place of arse when the Pogues first performed it on Top of the Pops. (As an aside, the band was first known as Poguemahone, Irish for "kiss my arse".)

In a repeat appearance in 1992, MacColl sang the amended lyrics, which presumably provides the audio for the version BBC 1 will be playing.

In 2007, BBC Radio 1 edited the words out, but later renounced that decision.

Over the years, some observers have drawn on the complex etymology of the word “faggot” to claim its use in the song is not homophobic, as alleged by many (including Tom Haynes, assistant editor of the student website The Tab, in an impassioned piece in December 2018, which argued not for the song to be banned but for yuletide revellers to resist the urge to sing that word with such gay abandon).

MacGowan, though, has not resorted to such dissembling, telling Irish TV in 2018 that though offensive, the lyrics were meant to be the words of characters rather than representative of his viewpoint.

"She is not supposed to be a nice person or even a wholesome person," he said. "She is a woman of a certain generation at a certain time in history and she is down on her luck and desperate."

MacGowan has been hailed as one of the great narrative songwriters. Writing in The Guardian on the occasion of his turning 60 – itself a remarkable achievement – Sean O’Hagan praised the “visceral authenticity” of his songs, which were frequently about "the lives of London's human flotsam and jetsam".

Nick Cave said he regarded MacGowan as "easily the best lyric writer of our generation", while Bobby Gillespie of Primal Scream noted that although his songs "are hard-edged" they always "have empathy" for the characters in them.

You can't say that on the radio … can you?

Money For Nothing, Dire Straits (1985)
The popular song from the Brothers in Arms album topped the charts in the US and the UK and won a Grammy, but in 2011 the Canadian Broadcast Standards Council ruled the use of the word "faggot" in the song unacceptable and advised it should not be played on Canadian radio stations. Singer Mark Knopfler was known to alter the lyrics during live performances.

Brown Sugar, Rolling Stones (1971)
References to violence, rape, slavery and paedophilia have done little to dampen the popularity of the Stones’ hit, though Mick Jagger often changes the lyrics in live settings, excluding lines such as "just like a young girl should" and "hear him whip the women just around midnight" in a bid to diminish its offensiveness.

Smack My Bitch Up, The Prodigy (1997)
The accompanying video clip for English rave group the Prodigy's controversial song did nothing to stem the outrage around this song's lyrics. Banned from MTV, it depicted drug use, violence and sexual excess.

F— Tha Police, N.W.A (1988)
From their 1988 album Straight Outta Compton, this protest song about police brutality and racial profiling created a storm of controversy, prompting a letter from the FBI to the group's record label, and provoking a heavy police presence at live shows and threats to shut down performances.

One In a Million, Guns N’ Roses (1988)
This early song from the LA hard rockers was deemed to be racist, homophobic and anti-police, charges lead singer Axl Rose defended for years. Nonetheless, when the band reissued the original album as part of a box set two years ago, it was left out.