Someone’s on the naughty list! Police therapy dog is caught stealing holiday toy donations in adorable video that shows him trying to sneak away with a baby doll carrier in his mouth

A police therapy dog’s early Christmas celebration was thwarted when he was caught stealing holiday toy donations for himself.

The Franklin Police Department in Massachusetts had collected toys to give to the Santa Foundation ahead of Christmas, but the room full of goodies proved to be far too irresistible for their golden retriever, Ben Franklin.

The canine culprit was caught red-pawed as he tried to sneak away with a baby doll carrier in his mouth — and it turns out that wasn’t the only toy he has taken this holiday season. 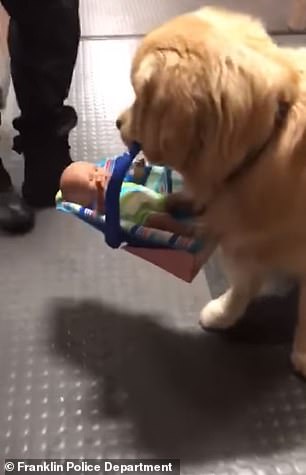 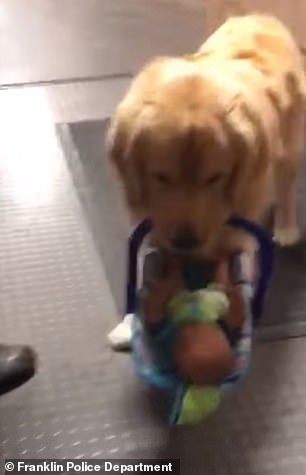 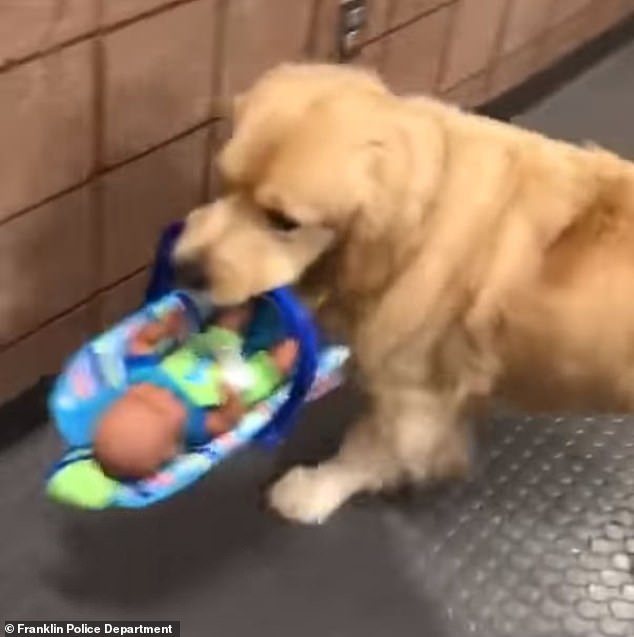 Santa’s fluffy helper? Officer Eric Cusson filmed the golden retriever as he tried sneaking away with a baby doll carrier in his mouth

The police department took to Facebook on Wednesday to share a video of the heartwarming moment Officer Eric Cusson discovered Ben’s treachery.

In the clip, the pooch can be seen with a baby doll resting in the carrier that’s in his mouth as he tries to make his great escape.

‘Where’re you going with your baby?’ Officer Cusson asks.

Ben slowly backs away before trotting down the steps and around the corner. The clever dog looks behind him to see if he is still being followed.

The people in the department can’t help but laugh as Officer Cusson explains off-camera that the dog is running away because he is afraid they are going to take the baby off them.

‘It’s okay. You can have it,’ he assures the therapy dog, who takes the toy underneath a desk, where he already has a stuffed animal.

‘Oh, you are priceless,’ the officer says. ‘He’s gonna stockpile toys over there. He keeps bringing them in here.’

‘We learned an extremely valuable lesson today,’ the department captioned the clip. ‘When you have a classroom full of toys ready to be shipped off to the Santa Foundation, you should… 1. Close the door to the classroom. Or 2. Keep the toys elevated.

‘If not, a golden retriever will slowly hoard them throughout the day and bring them back to his layer. Thanks to Officer Cusson for capturing this larceny on camera.’ 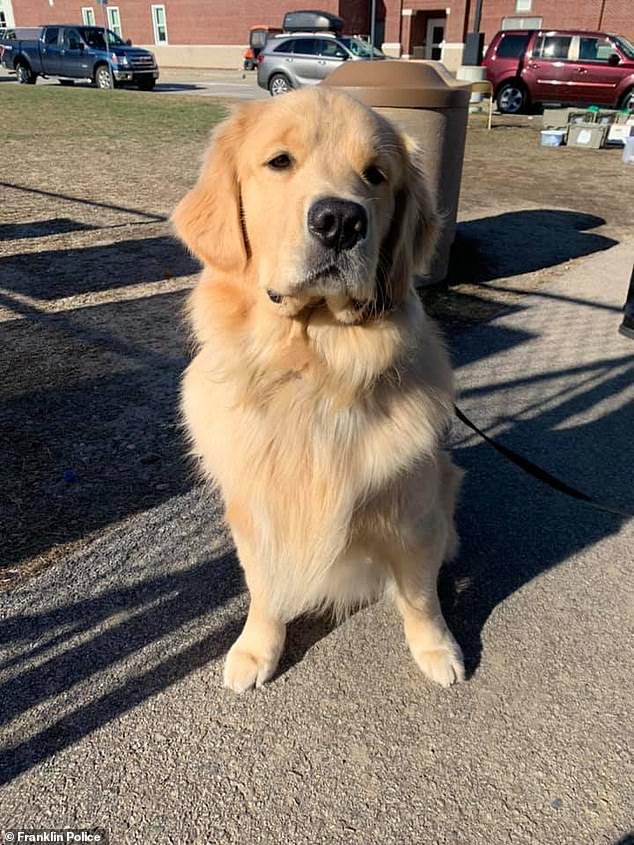 Learning moment: The police department posted on Facebook that they learned an ‘extremely valuable’ lessons: either keep the door to the donation room closed or the toys elevated 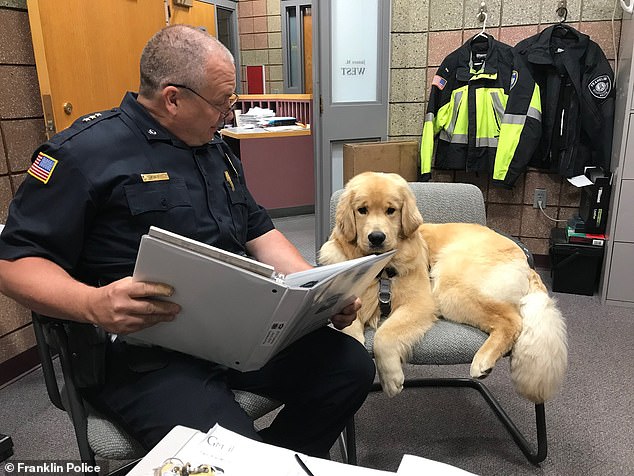 Going viral: The video has been viewed more than 55,000 times, with many people saying Ben’s adorable treachery made their day

The adorable video has earned more than 55,000 views, with Facebook users taking to the comments to say the clip made their day.

‘That was so adorable!!!! The guilty party fled from the police, but was eventually surrounded and apprehended!’ another added.

There were also plenty of people who cheered the dog on, with one writing: ‘Good for you Ben! You’ve earned a few extra toys this year.’