Prince William thanks the emergency services during a special ceremony

The Duke of Cambridge saluted the emergency services for their ‘tireless work’ and their incredible efforts during the Covid-19 pandemic.

Prince William, 38, have a speech during a special online thanksgiving service to honour 999 heroes organised by the National Emergency Services Memorial charity.

The event, which takes place yearly, celebrates the work of the NHS and emergency response staff and is attended by politicians and members of the royal family.

Belfast Cathedral was mean to be the venue for today’s ceremony, which was moved online due to Covid-19.

It comes two days after Prince William’s brother Prince Harry and his wife Meghan Markle announced a deal with Netflix, which could be worth up to $150 million, to produce ‘impactful content that inspires hope’. 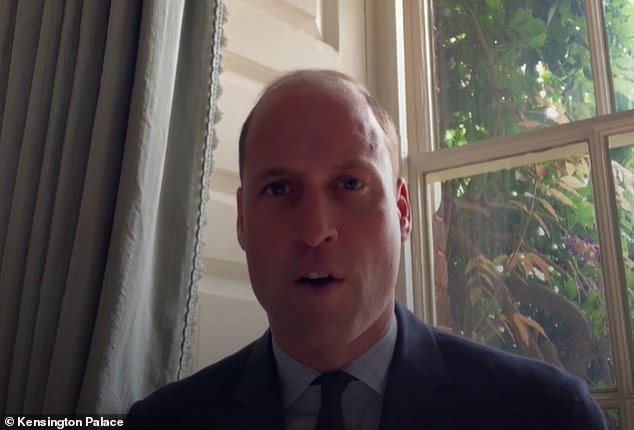 During his speech, Prince William stressed what a great source of pride the emergency services community is for the UK, and he thanked them repeatedly for the way in which they helped save others during the Covid-19 crisis.

Speaking in a video from Kensington Palace, he said: ‘At one point or another, each and everyone of us will benefit from the care and protection provided by our emergency services.

‘Their courage and self-dedication to their work is something this country is rightly proud of.

‘This year more than ever, we’ve been repeatedly reminded of the sacrifices made by all those in the emergency community as they worked tirelessly to protect us against covid-19 and keep the country going in the most challenging circumstances.

Prince William, who worked full-time as a pilot for the East Anglian Air Ambulance service from 2014 until 2017, drew from his personal experience in his speech. 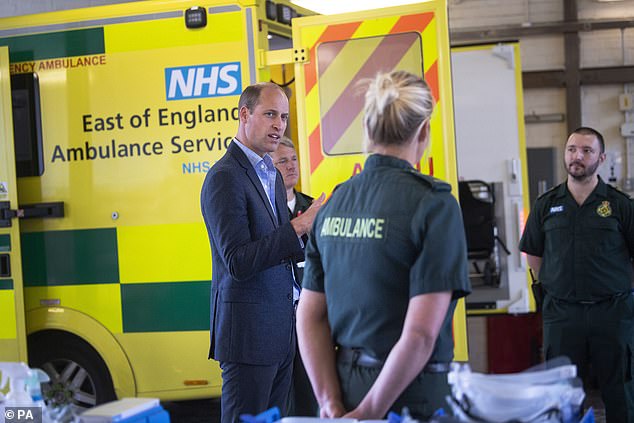 Prince William talking to paramedic staff from the East of England Ambulance Service Trust at the Ambulance Station in King;s Lynn in June

‘Having had the privilege of working alongside the emergency responders, I’ve always been struck by their remarkable can-do attitude in the face of even the greatest emergencies,’ he said.

‘They showcase the very best that our country has to offer, and this is never more apparent than at times like these.’

He moved on to honour the memories of responders who have died in the line of duty.

‘Tragically, some will pay the ultimate price as a result of their efforts in their line of duty,’ he said, adding: ‘While others will experience the lasting effects on their physical health or mental well-being.’

Prince William then called for more support of the emergency services across the country.

‘We all have a responsibility to do what we can to support this community. And to remember their efforts to keep us safe,’ he said.

‘As well as the many sacrifices made by both them and their families, which is why today’s service is so important,’ he added.

‘On behalf of my family I want to thank you all, your hard work, your determination and your courage are a tremendous source of pride for our country and we will be forever grateful for what all of you do,’ he concluded. 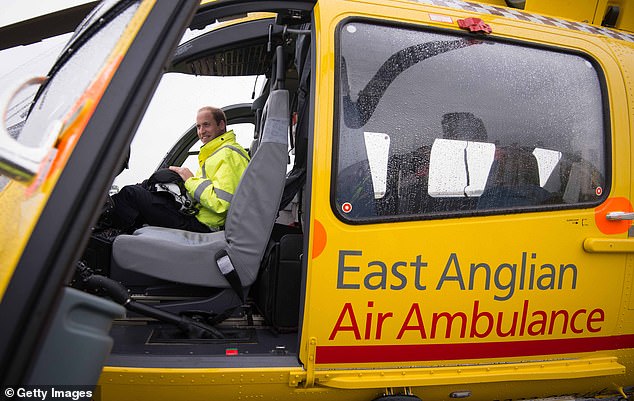 The father-of-three was joined by the First Ministers of Northern Ireland, Scotland and Wales, and the Secretary of State for Health and Social Care.

Today’s programme included singing from the Blue Light Choir. Videos from the Chairs of the Police, Fire and Ambulance Councils and Director of Her Majesty’s Coastguard were also shared during the event.

Secretary of State for Health and Social Care, Matt Hancock MP, also voiced his appreciation for the emergency services, saying: ‘Our emergency services and frontline NHS workers play a pivotal role in keeping us safe, and have worked tirelessly to protect us all throughout this pandemic.

‘This has never been more true than during the unprecedented times we have been through over recent months in our fight against Coronavirus.

‘We are all incredibly grateful for your continued hard work, and I am honoured to participate in this special online programme to express my thanks to everybody in our emergency services and NHS.’

The multi-faith event also included a wreath laying ceremony to remember to the more than 7,500 emergency services personnel who had lost their lives in the line of duty, including 300 who have died after contracting coronavirus.

Meghan Markle and Prince Harry ‘did NOT inform the Queen about $150m Netflix deal’ before announcing it to the world – leaving her to hear the news from aides, royal source claims

Meghan Markle and Prince Harry failed to tell the Queen about their Netflix deal, which could be worth as much as $150million, before announcing it to the world, a royal source has claimed.

The Duke, 35, and the Duchess of Sussex, 39, who recently bought a $14million mansion in Santa Barbara, have signed a new deal with the streaming service, and say they want to provide ‘hope and inspiration’ with their upcoming projects.

Yet Her Majesty, 94, had to be told by her aides about the couple’s new venture – which involves a yet-to-be-named production company set on making documentaries, feature films and children’s programming.

A source told The Sun: ‘Harry did not inform the Queen about the Netflix deal.’

Prince Harry and Meghan Markle announced on Wednesday that they have signed a deal with Netflix. Pictured, in a video supplied on Monday July 6, 2020 by The Queen’s Commonwealth Trust

It comes following reports that royal officials ‘will examine the pair’s deal’ after they agreed to approval of any new commercial ventures when they quit public life.

The Duke and Duchess of Sussex, who have never produced a TV show, will make documentaries, films, scripted and kids’ programmes in the new partnership.

‘Her Majesty is all too aware of the pitfalls of when senior royals embark on lucrative projects – Prince Edwards’ production flop and some of the deals Sarah Ferguson has signed over the years to name a few,’ the source told Fabulous.

‘Her view is simple, the Royals are not for sale and danger surrounds high profile roles outside of the institution itself.’

They added, however, that the Queen, ‘knowing her grandson Harry as she does’, will appreciate that the duke and duchess can not be talked out of their plans.

Harry and Meghan said on Wednesday they had founded a production company to make documentaries, feature films, scripted shows and children’s programmes. 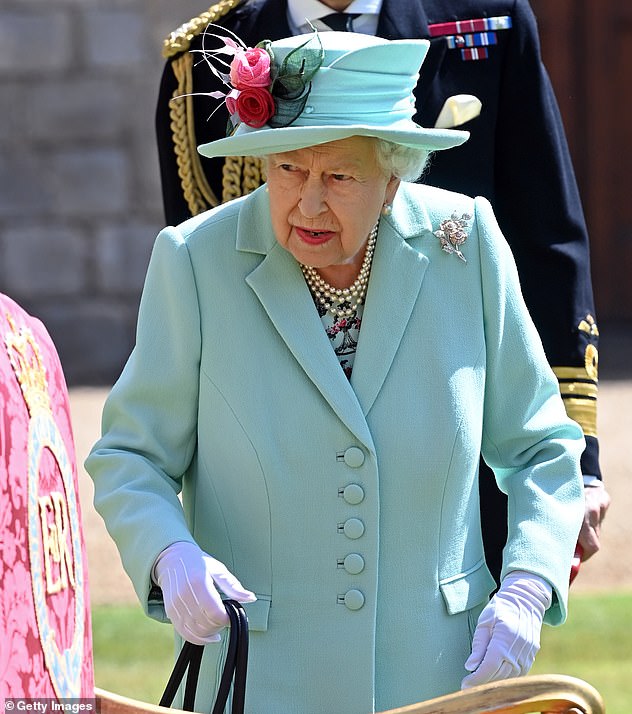 But the couple failed to tell the Queen (pictured in July) about their deal, which could be worth as much as $150million, before announcing it to the world, a royal source has claimed

They vowed to make ‘impactful content that unlocks action’ and name-checked Netflix chief executive Ted Sarandos and spoke of the firm’s ‘unprecedented reach’.

They are expected to make content which includes work on ‘mental health’, an animated series about women, a nature documentary and shows on community service.

However, royal officials ‘will examine Harry and Meghan’s Netflix deal’ after they agreed to approval of any new commercial ventures when they quit public life, according to a source.

A palace insider claimed that despite ditching official duties any profit-oriented plans would be ‘subject to discussion’.

Emer, prince, Thanks, the, William
Celebrities