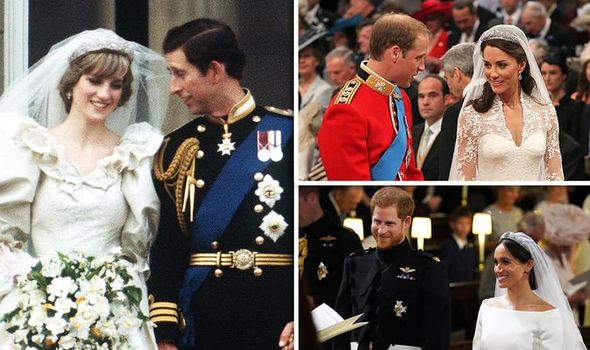 The Royal Family is no stranger to tradition; in weddings and in everyday life, they follow a famously rigid protocol that rarely adapts or changes. However, when Princess Diana married Prince Charles, she set a precedent which both Prince William and Prince Harry, and their wives, have followed since.

Since 1662, the Anglican Book of Common Prayer listed this line in its marriage vows: “To love, cherish and to obey, till death us do part.”

When Princess Diana faced Prince Charles at the altar on their wedding day in July, 1981, she didn’t say the traditional vows.

Instead, she left out the words “to obey”.

Fast forward 30 years and when Prince William went to say “I do” to Kate Middleton, they followed in the Princess of Wales’ footsteps.

Speaking about the future King and Queen’s big day, ITV’s Lorraine Kelly explained: “When it came to the vows, Kate took Princess Diana’s example by not promising ‘to obey’.

“Instead the couple vowed to ‘love, comfort, honour and keep’ each other.”

As for Prince Harry’s wedding to Meghan Markle in 2018, she too followed Kate and Diana and left out the words “to obey”.

However there are some royals who have stuck with the age old tradition.

Five years after Diana married Prince Charles, Sarah Ferguson, the Duchess of York, said “to obey” when marrying into the Royal Family in 1986.

Royal expert Roberta Fiorito spoke about this and commented: “I love that Diana omitted the word obey from the wedding vows, she was the first royal to do that.

“I believe, when we talked about Fergie’s wedding last week, that Fergie said the word obey.

“She went back five years later to the tradition of saying it, so an interesting contrast there.”

Even the Queen kept “to obey” in her wedding vows to Prince Philip in 1947.

There was a 12-year age difference between the couple.

Their wedding was hailed as “the wedding of the century” with an estimated audience of 750million people around the world tuning into watch the televised ceremony.

Following the service at St Paul’s Cathedral, the Queen hosted a wedding reception at Buckingham Palace.

As for what Diana wore on the big day, Express.co.uk recently detailed her iconic dress.

The gown was made from silk-taffeta and had Eighties era-defining puff sleeves.

The royal also requested her dress designers to sew a good-luck charm to the inside of her dress.