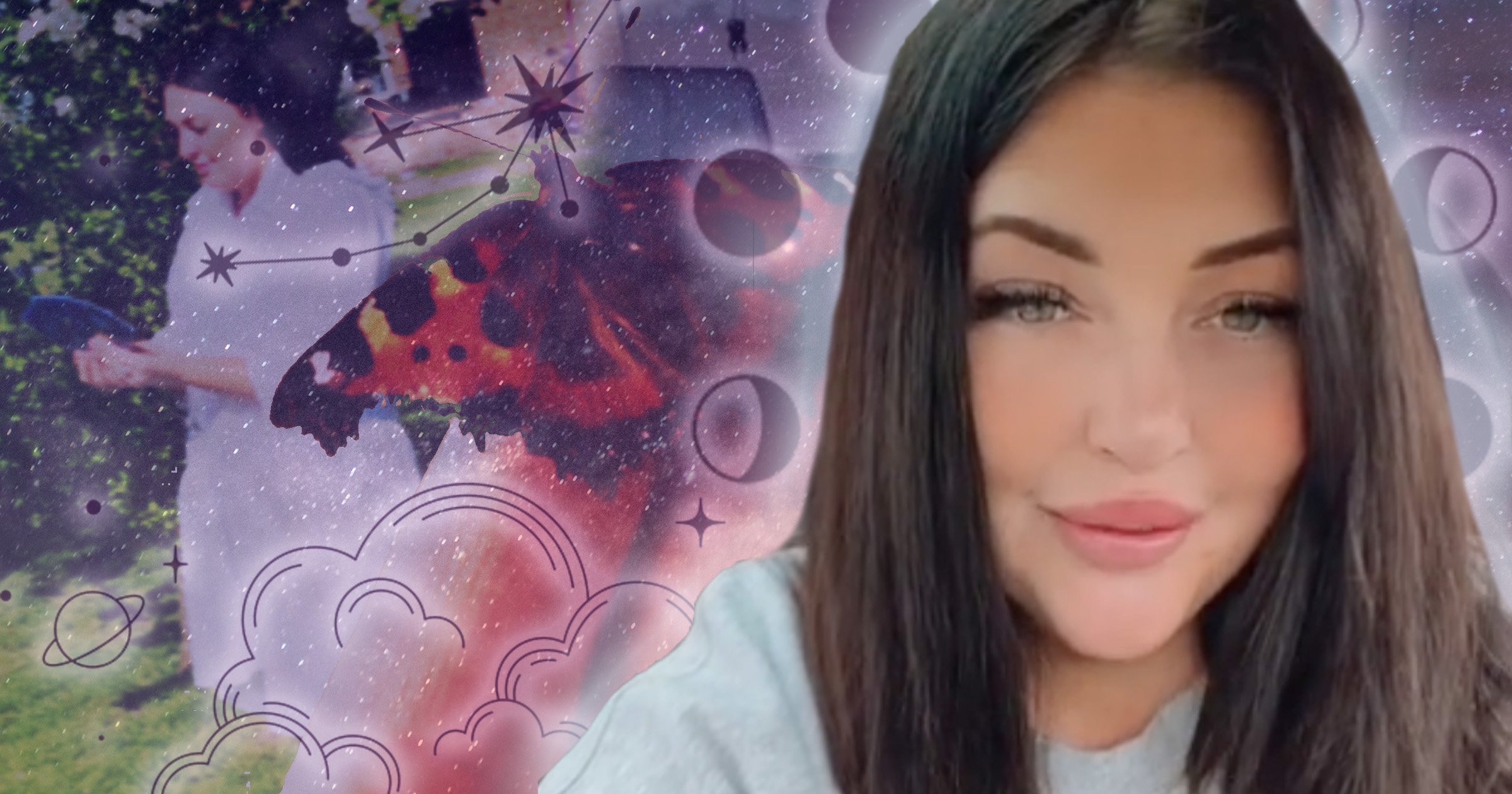 ‘I haven’t had anybody say to me that I’ve been wrong yet,’ says Chloe Smith, a medium who offers fertility readings to expectant parents.

With a 100% success rate, the 24-year-old is sought after for her accurate and compassionate predictions, and Chloe’s client list is bulging with celebrity bookings.

But far from picking a conception date out of a hat and giving false hope as some mediums do, the mum-of-three says her method takes a number of things into account.

‘They don’t just pay for a reading and then I tell them when they’re going to have a baby.’

Although Chloe, who lives in Staffordshire with her partner and three kids, George, five, and Ivy and Charlie, both three, had always felt some connection to the spiritual, she says the realisation that she was a medium didn’t arrive until recently.

‘Growing up, I always had nightmares,’ said Chloe. ‘And then, last March, my nan passed over.

‘I went to her funeral and she was just stood there – crazy, I know. She’s always by my side all the time. I see so much now.’

She’d tried careers from dog grooming to metal engraving, but hadn’t found her passion, working with her partner at their auto body repair business. But when Chloe’s grandma’s spirit asked her to use her gift to help others, she knew she’d found her calling.

Since starting her business, Chloe has now gained over 55,000 followers, charging between £20 and £70 for different categories of reading. Some include messages from spirits or angels, while others will be more focused on someone’s energy or signs from cards and other divination tools.

Her main rule is that she never tells clients anything bad, focusing on the positives of their situation and what they can look forward to.

If, for example, she sees a dark-haired man in a lab-coat, this may point towards a doctor or fertility expert being involved. While for some that may be sad news, Chloe argues that this is a good sign that suggests they’re on the right path.

If she doesn’t see conception in a client’s future, Chloe will look into other options they may have.

‘It doesn’t mean it’s going to be the end of their journey to be a parent,’ she says. ‘And they’re going to have a baby in some shape or form, because that is something they’ve always wanted.’

Speaking about the proliferation of mediums offering low-cost impersonal fertility readings through sites like Etsy, Chloe added: ‘I can understand why people do pull cards and say “you’re going to have some kind of celebration in this time period and it could be a baby”, but you’re messing with everybody’s emotions.

‘You’ve got to make sure your facts are right and make sure that you’re you’re a true psychic and a medium to be able to do that.’

In response to detractors of psychic mediumship, Chloe prefers to let her work do the talking.

She says: ‘I turn non-believers into believers. If I can tell them something that nobody else knows, then I know that I’ve won that way.

‘But it’s not about the money. It’s about helping people.

‘Yes, I’m a medium. Yes, I’m a psychic. I can talk to dead people and I can predict things. But it’s also helping people through anxiety and depression, and letting them be open with me like a counsellor.’

One of Chloe’s clients hadn’t mentioned her fertility struggles during their sessions, but she could sense something was wrong.

She advised the woman that it seemed like her stress levels were impacting things, and that if she tried to worry less about conception she’d boost her chances.

Chloe also predicted that the client – who had the reading in January – would be telling her loved ones good news in November. Sure enough, that same client called back in November to confirm she was pregnant, and has now had her much longed-for baby.

Being able to connect with spirit isn’t all plain sailing, however. A recent visit to the hospital with her son, in particular, was difficult for Chloe.

She said: ‘The number of ghosts and spirits that came forward to me was crazy. I couldn’t give them eye contact because I was in A&E, and communicating with ghosts would have people thinking I’m a looney – so I try hard to just focus, but it does give me a banging headache.

‘It’s almost like a ghost whisperer. It was just insane.

‘They knew that I could see them and they could see me so it was like them trying to run to me; literally queues and queues of ghost trying to communicate with me.’

After buying their dream family farmhouse, Chloe began to notice that her children seem to have the gift too.

‘There’s a little girl ghost in my house called Charlotte,’ Chloe tells us. ‘She was strangled to death and she plays with my kids.

‘My oldest son is particularly into spirits – he just forgets things the day after because he is quite young. He’s only five but even sees things at school. He talks to the old caretaker there, it’s crazy.’

And thankfully, an unconventional career like mediumship allows her to spend more quality time with her family. From struggling to afford nappies for her babies, she’s now in a more comfortable and happy place.

On the horizon, Chloe has some big things coming up. Alongside starting her own podcast, she’s launching a range of candles and pendulums, and has had calls from the likes of the BBC looking to work with her.

After years of struggling with anxiety and depression – not to mention while dealing with three kids under five – she’s found support among the spiritual community.

‘I absolutely love what I do,’ Chloe said.

‘I love helping people, and I love when they come back to me and say it’s really been helpful.

‘I’m a completely different person nowadays and it’s just amazing having that feedback.’