Performing remotely from home has proved a bridge too far for Australia’s Eurovision hopeful Montaigne, who was dumped out of the song contest at Wednesday’s first semi-final.

The singer’s premature exit ends a string of successful results for Australia in the competition, which had seen us qualify for five straight grand final appearances from five attempts. 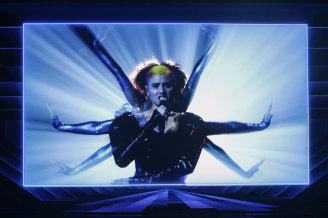 Montaigne’s pre-recorded performance at Eurovision couldn’t get Australia through to the grand final.Credit:AP

Logistical complications caused by the ongoing COVID pandemic meant Australia’s 2021 Eurovision entry had faced an uphill battle in the competition.

ARIA-winner Montaigne, real name Jess Cerro, was the only contestant among the 16 performers in Semi-Final 1 who was unable to perform live in Rotterdam after SBS decided against sending an Australian delegation to the contest, citing travel concerns amid the global pandemic.

Instead, her performance of song Technicolour was submitted “live-to-tape” from a recording completed under strict Eurovision guidelines at a closed set in Sydney’s Eveleigh in March. 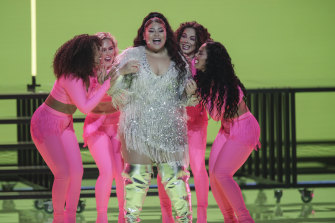 According to the “Scenario C” protocols devised by the show’s organisers, the European Broadcasting Union, the singer was given one hour to complete three live performances with the best take submitted as Australia’s official entry.

It meant that on Wednesday, Montaigne became the first singer to ever perform remotely at Eurovision, beamed onto a big screen at the auditorium which housed a live audience of 3500 people.

Despite the pre-recorded performance, its strobed atmospherics and vocal gymnastics slotted in seamlessly enough among other numbers featuring pyrotechnics, cardboard cutouts, finger dancing and a mirror ball vest. A satellite cross to SBS’s studios in Artarmon also meant Montaigne wasn’t entirely left out of the live broadcast, and received encouraging applause from the live audience.

However, her chances of going far in the competition were always considered a longshot, with online booking agencies listing Australia at 300-to-one odds to win the contest.

Wednesday’s semi-final marked the return of Eurovision after the iconic song contest was cancelled for the first time in its 65-year history last year due to COVID.

Ten more nations will be selected from Friday’s second semi-final, with the grand final to air live on SBS at 5am on Sunday, May 23.