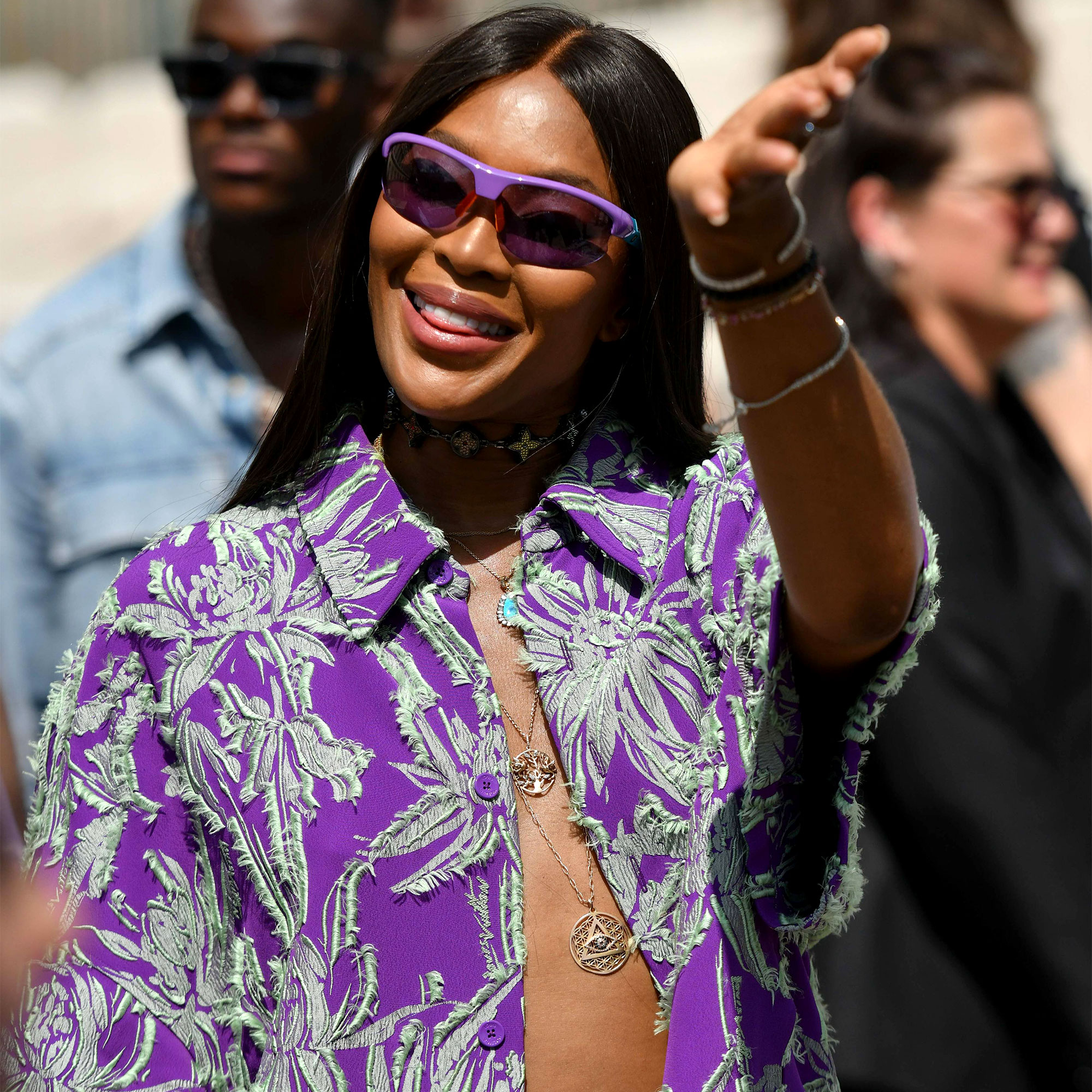 When it comes to fashion, Naomi Campbell is fearless! The supermodel turned heads at the Louis Vuitton menswear show during Paris Fashion Week in what may be her most daring look to-date.

For the spring 2023 presentation on Thursday, June 23, Campbell, 52, nearly avoided a nip slip as she went braless underneath an unbuttoned purple, palm tree-adorned shirt from the French fashion house. She paired the bold look with coordinating pants and layered necklaces as well as a Louis Vuitton choker. The U.K. native also accessorized with a pair of purple-lined sunglasses. On her feet, she went with black pointed toe boots. For her glam, Campbell rocked soft makeup and styled her hair straight down her back with a middle part — a signature look for the star.

Campbell shared a moment from the show via Instagram, captioning the post “#LONGLIVEVIRGIL” a nod to the late Louis Vuitton creative director, Virgil Abloh. The designer died on November 28, 2021, following a private battle with cancer.

The Empire star’s Thursday look comes after she showcased another eye-catching ensemble earlier this month. The fashion icon brought her model looks to Queen Elizabeth II‘s Platinum Jubilee on June 5, stepping out in a trench coat dress by Burberry. The regal ensemble featured a belted waist and buttons trailing down the skirt. The Queen’s Commonwealth Trust ambassador accessorized with turquoise jewelry and oversized sunglasses.

Most Embarrassing Wardrobe Malfunctions of All Time: From Broken Straps to Split Pants

“#Platinumjubilee #70,” Campbell captioned the post in reference to the queen’s 70 years on the throne. 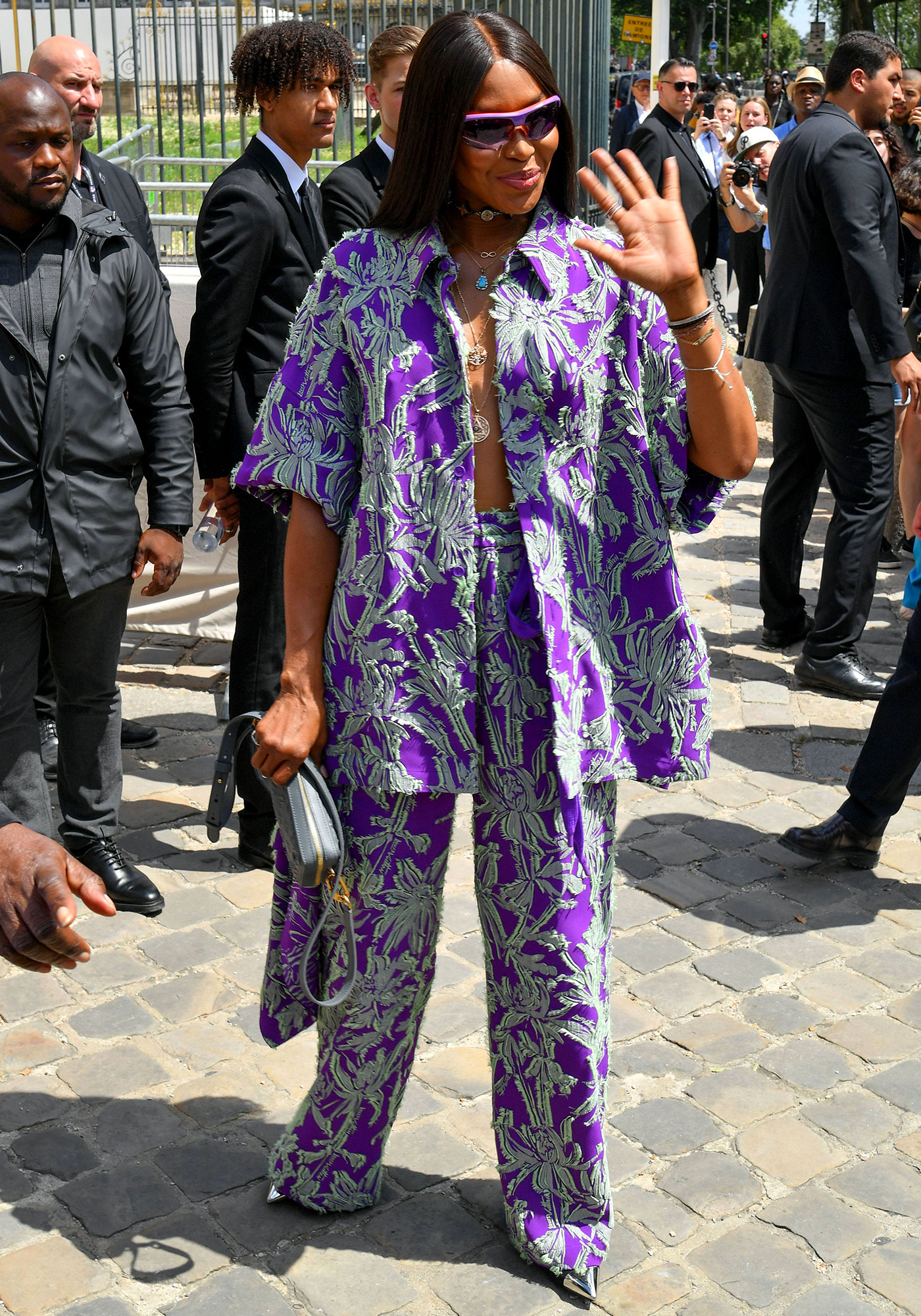 The pageant concluded Her Majesty’s days-long celebration. Campbell, and a host of other stars and influencers, including Kate Moss and Charlotte Tilbury, honored the 96-year-old monarch by riding on a number of double-decker busses — each representing different eras of the queen’s reign. The supermodels were seated on the ’90s bus and waved to onlookers on the streets of London.

Although Campbell exudes confidence on a daily basis, she revealed in an interview with British Vogue, published on February 14, that the fashion industry can be intense.

“I still enjoy it, but it’s nerve-racking … walking with girls who are 18,” she said. “It’s great to be with these young‘uns at my age, but I have to say, at one of the shows I was like, ‘Come on, girls! Pick up your free! Why are you walking so slow?’”

About Last Night: See the Best Dressed Stars on the Red Carpet and Beyond

She went to on to add that she found the whole experience to be more “joyful” when she was walking the runway alongside her “girls,” aka Linda Evangelista, Cindy Crawford and Christy Turlington.

“We smiled. We got to show off our personalities,” she said. “It was an incredible time, but we worked hard. And no matter how many outfit changes, how many shows, we never said we were tired. We all love it and we kept each other’s energy up.”