NFL star Rob Gronkowski is donating $1.2 million to help restore a beloved Boston playground in partnership with his youth foundation. The funds will help renovate the Charlesbank Playground on the city’s Charles River Esplanade and create a trust to maintain the property.

Gronkowski, 31, made the donation through his family’s organization, the Gronk Nation Youth Foundation, which is dedicated to helping kids through sports, education, fitness and community development. “The concept of this playground will be to motivate kids to be outdoors, get fit and have fun,” Gronkowski said in a news conference Friday. “I hope this playground inspires the next generation of athletes.”

Gronkowski said his organization helped raise the funds at the Boston Marathon. The donation is one of the largest private gifts ever given to a state park in Massachusetts, according to Michael Nichols, the executive director of the Esplanade Association.

Nichols said the new playground will be “a significant and lasting gift to the next generation of children in Boston.”

Gronkowski spent nine seasons with the New England Patriots, helping the team win three Super Bowls. He retired in 2019 before returning to the gridiron in 2020 to win a Super Bowl with his former Patriots teammate Tom Brady.

“No matter where I go, or where I live, I will always have a special connection to New England and the people who live here,” Gronkowski said. “The Patriots taught me the importance of giving back the very first day I stepped into that organization.” 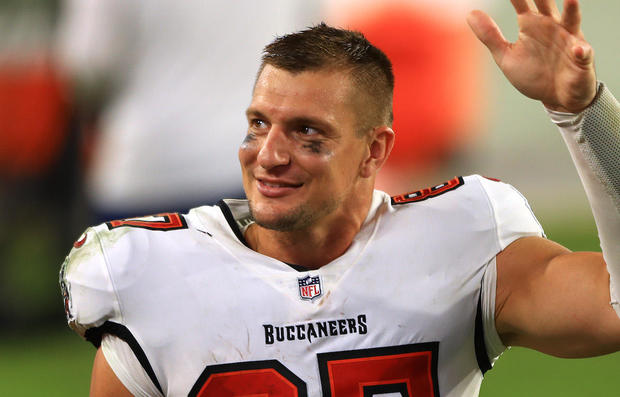 At Friday’s news conference, Massachusetts Governor Charlie Baker thanked Gronkowski for his donation and his family’s continued philanthropy to the state. “They give back time and time again and they especially give back to the youngest, most vulnerable and frailest among us, our children,” Baker said.

The donation will help update the playground’s climbing structures, slides and swings. The Esplanade Association will work with Gronkowski to design and pick out the new equipment for the playground. His foundation will provide the first 10 years of maintenance costs for the park to make it an accessible place for kids to play.

“I’m humbled and honored to have the opportunity to be part of this amazing community and give back in this way for generations to come,” Gronkowski said Friday.

At the news conference, Representative Jay Livingstone said he and Senator Sal DiDomenico have filed legislation to rename the playground to “Gronk playground” in honor of the donation.