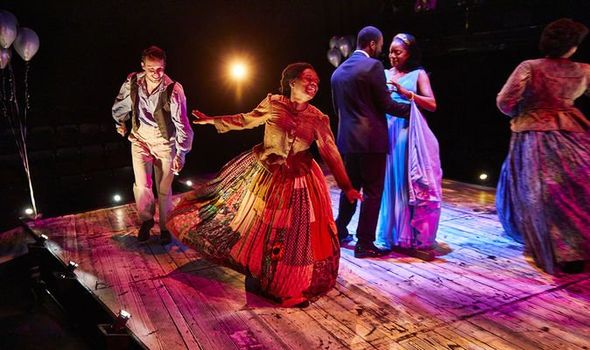 Opening in the present day it jumps back and forth in time between Turner’s era as the irascible artist puts the finishing touches to his paintings and the present day when a black British actress whose fame is due to her role in a US Science Fiction TV series accepts a role in a film on Turner’s life and his slave ship paintings to expose the hidden truth about the vessels and their human cargo.

A family of freed slaves attempt to make a life in London when the husband signs on for a long sea voyage aboard a ship that unbeknown to him, was a former slaver.

At one stage, a mermaid ghost appears. Confused? You will be after two hours of to-ing and fro-ing and hectoring and lecturing about the black experience in Britain across the centuries and the way the liberal white abolitionists have appropriated the narrative from those whose story it really is.

Pinnock’s ambitious and admirable attempt to explore the legacy of the past and its trickle down effect on the present is undone by her failure to draw the various threads together into a coherent whole.

It is conducted on a set of grey planks that serves as a ship’s deck as well as docks and interiors, water kissing the edges. With echoes of John Fowles’ overlapping era structure of The French Lieutenant’s Woman it is at first intriguing, then confusing and finally tiresome.

A shame, as there is much to admire in the detailed performances, especially of Kiza Deen as Lou, the compromised actress and Karl Collins, the husband for whom the lure for the sea is stronger than his domestic duty. Great to see the ageless Cathy Tyson in a variety of characterful roles, too.

If Paul Bradley’s Turner bears the legacy of Timothy Spall’s performance in Mike Leigh’s 2014 film Mr Turner it is no bad thing.

A play of ideas rather than characters, it is like a huge jigsaw with some vital pieces missing.