Rose McGowan slams Twitter for booting her over Clinton photo

Rose McGowan is now a permanent resident of Mexico

Rose McGowan says she’s been quiet on social media because she’s been battling depression, calling it a “beast to dance with.”

“I haven’t been posting because I’ve been deeply sad and very low,” the “Charmed” actress wrote on her Instagram Story Thursday. “Depression is an intense beast.”

McGowan, who’s opened up about her battle with depression, trauma and PTSD in her 2018 memoir, “Brave,” continued, “I speak of my history with a mind that wants me to sleep forever. It blocks the sun for so many of us.”

She went on to tell people if they suffer from depression, they are not alone.

“I want me to know I’m not alone, no matter how hard my mind whispers the thoughts of the sleep 30 hours kind of sad,” McGowan, 47, wrote. “The crying and I don’t know why sad. The I just want it to stop sad. I will never put up a false front to the world and post a false joy I’m not feeling. Depression is a beast to dance with. Sometimes the beast holds your head down.

“But what I know is that there will be light again. And the day will come when the weight of sadness will disappear. And we will raise our faces to the sun.” 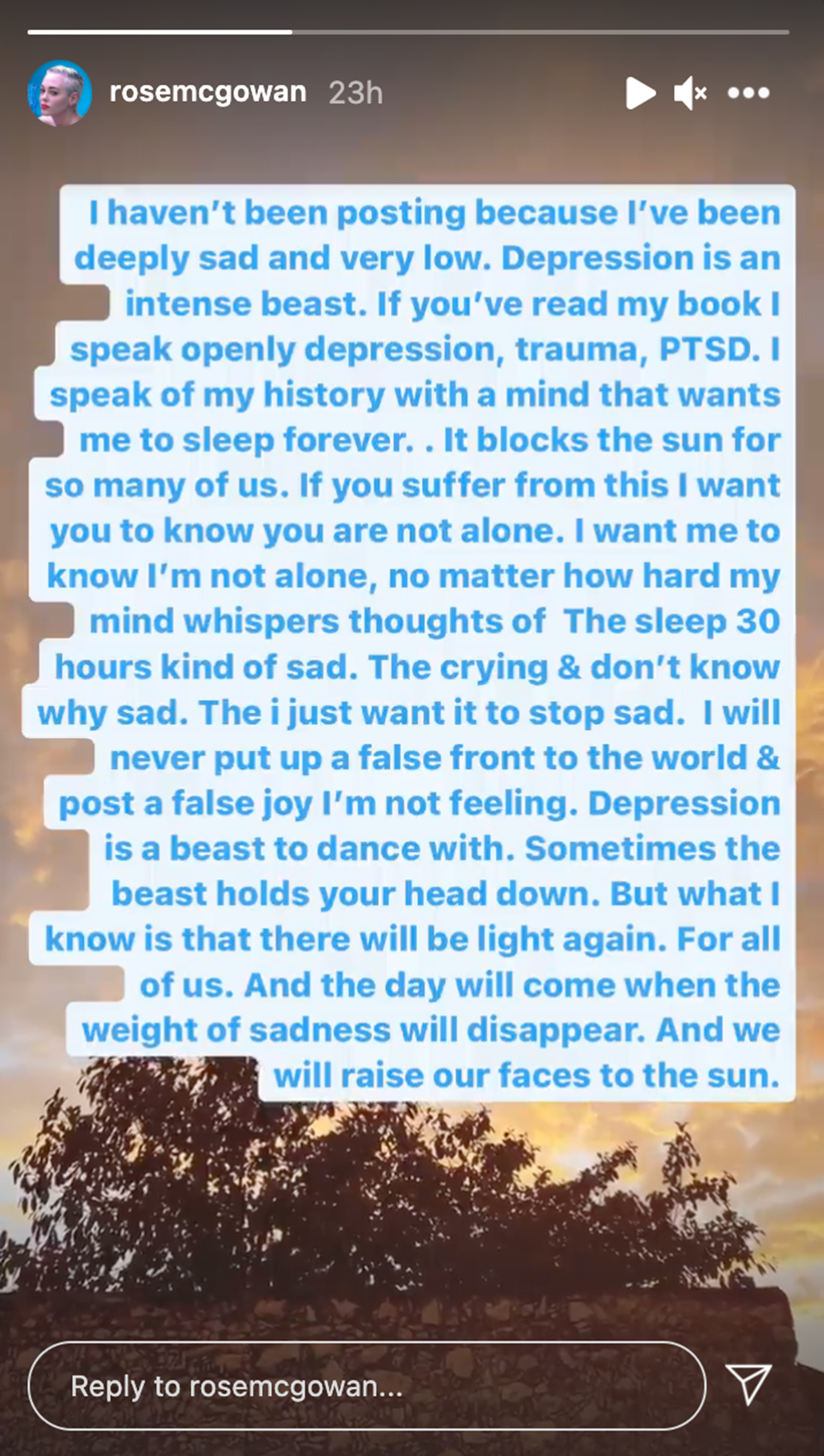 McGowan has long been an outspoken activist and supporter of the #MeToo movement. She was one of the first women to speak out against Harvey Weinstein, accusing him of raping her in 1997.

Last year, the “Grindhouse” actress accused director Alexander Payne of “grooming” and sexually assaulted her when she was 15. The “Sideways” director has denied the allegations.

And earlier this year, she tweeted her support of Evan Rachel Wood, who claimed her ex, Marilyn Manson, abused her.

McGowan, who was previously engaged to Manson for two years, tweeted: “I stand with Evan Rachel Wood and other brave women who have come forward. It takes years to recover from abuse and I send them strength on their journey to recovery. Let the truth be revealed. Let the healing begin.”

In February, McGowan moved to Tulum, Mexico and is now a permanent resident.