COIN collectors are keeping their eyes peeled following confirmation that the Royal Mint is launching a Winnie the Pooh 50p.

The popular teddy bear has featured on 50p shaped "coins" in the past, but this will be the first time he's graced a coin made by the Royal Mint. 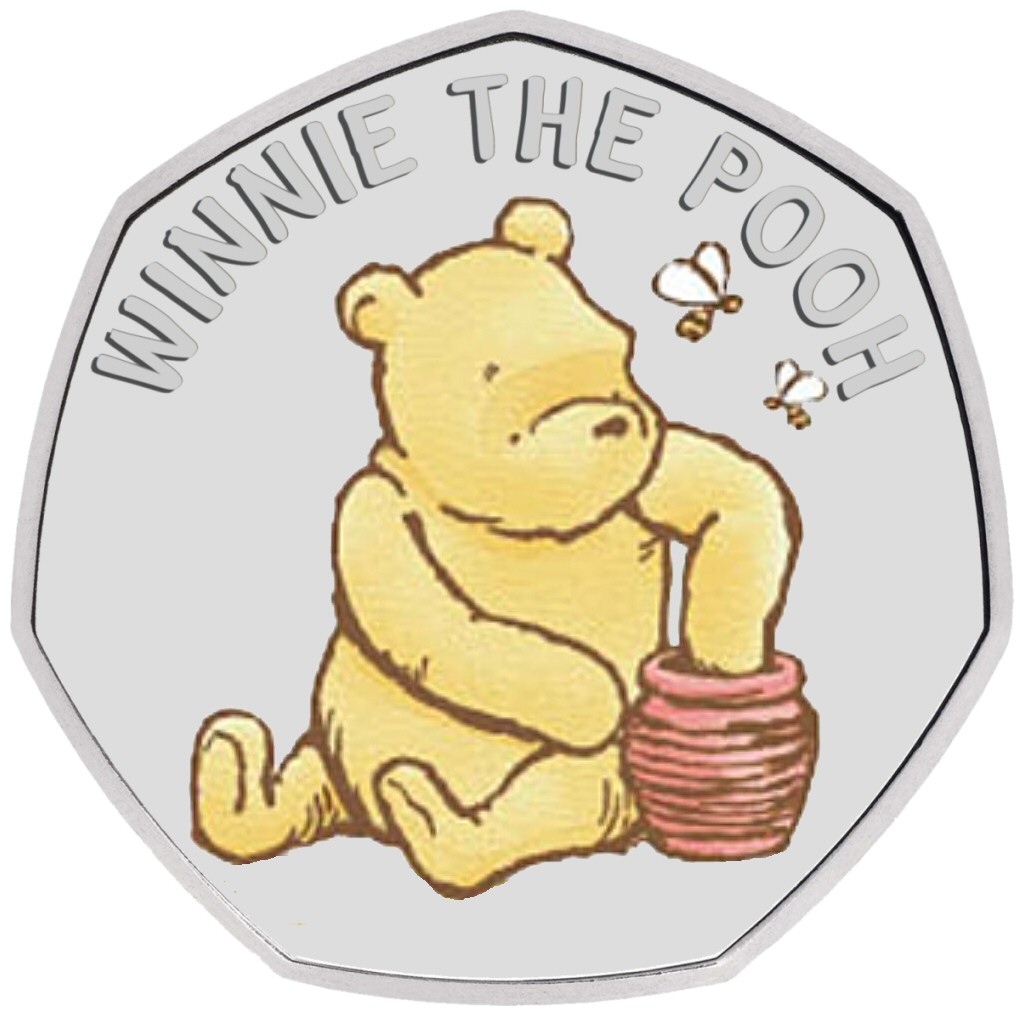 Winnie the Pooh will be the first coin to be released in a three-piece set, also featuring Christopher Robin and Piglet 50p coins.

The coins will be released to mark the 100th birthday of the character, created by A.A. Milne.

The designs are currently being kept under wraps, but coin expert Colin Bellamy of the Coin Hunter website reckons the Winnie the Pooh version will feature the popular character without his short red jumper with one hand in a jar of honey and bees buzzing overhead.

But while the coin maker has confirmed it's launching the coins in future, Royal Mint said they won't enter circulation.

Sadly, this means you won't be able to find the coins in your spare change.

It's also not yet clear when the coins will launch nor how much they'll cost. But the Royal Mint told The Sun fans can register their interest on its website.

Mr Bellamy reckons the 50p Winnie the Pooh coin is likely to fetch just £4.50 if sold on eBay as that's the price they're expected to be sold for without official packaging on coin website Westminster Collection.

What are the different types of coin?

THESE are the coins you can see from the Royal Mint:

Royal Mint is expected to sell brilliant uncirculated versions of the coins for £10 each based on previous launches.

Mr Bellamy told The Sun that if the 50p coin was to enter circulation, it could've become the second most valuable 50p after the Kew Gardens coin.

Kew Gardens coins were originally released in 2009 to celebrate 250 years of the Royal Botanical Gardens.

The coin features one of the garden buildings at the UNESCO World Heritage Site; the Chinese Pagoda built in 1761.

However, last year an uncirculated 50p coin featuring Sherlock Holmes sold for £500 on eBay, meaning the Winnie the Pooh coins may sell for more too.

Is your small change worth a fortune?

IF you think that you might have a rare coin then you might be able to make a real mint.

The most valuable coins are usually those with a low mintage or an error.

These are often deemed the most valuable by collectors.

You should check how much the coin is selling for on eBay.

Search the full name of the coin, select the "sold" listing and then toggle the search to "highest value".

It will give you an idea of the amount of money that the coin is going for.

You can either choose to sell the coin on eBay or through a specialist like ChangeChecker.org.

If you choose the auction website then remember to set a minimum price that is higher or at the very least equal to the face value of the coin.

Even if your coin “sells” on eBay for a high price there’s no guarantee that the buyer will cough up.

It its terms and conditions, the auction website states that bidders enter a “legally binding contract to purchase an item”, but there’s no way to enforce this rule in reality.

The most eBay can do is add a note to their account for the unpaid item or remove their ability to bid and buy.

Coin hunters have also snapped up non-official Winnie the Pooh "coins" from the Koin Club featuring the character and Tigger for up to £11.99 on eBay.

The Koin Club manufactures branded coins under license, but they're not legal tender.

Alexandra Siddons of coin expert Change Checker told The Sun the series is "sure to be incredibly popular" among collectors, following in the footsteps of other popular character themed 50ps, such as the Beatrix Potter coins and the Gruffalo 50ps.

She added: "If the popularity of these series is anything to go by, we expect the Winnie the Pooh 50ps to be in high demand with collectors."

If you think you've got a valuable coin in your change and are looking to sell it, you should get it verified by the manufacturer first.

You can then either get it valued by a dealer or check how much they're selling for on eBay by searching through sold listings.

Of course, keep in mind that a coin is only worth what someone else is willing to pay for it.

Circulated coins are the ones you see'll see in your shop change and can be used to pay for things, while commemorative coins are simply released as collectables to mark events in UK history.

A spokesperson for The Royal Mint said: “Bee-ginning with a Winnie the Pooh 50p coin, we are introducing a series of designs inspired by the classic stories of A.A. Milne.

"The series will celebrate Winnie the Pooh and friends as they appear for the first time on a UK 50p coin.

"We will announce more details in due course."

Last September, Coin Hunter and Change Checker both said the Royal Mint was preparing to launch a second Gruffalo 50p.

The coin maker didn't confirm it at the time, but a month later released the coin.

They joined two others already featuring the bear from darkest Peru.