Home » Scientist reveals tips for slowing down the aging process

Scientist reveals tips for slowing down the aging process

Want to live longer? Stop taking your vitamins! Scientist reveals tips for how to slow down the aging process – from avoiding supplements and over-the-top workouts to brushing twice a day

A scientist has revealed his top tips for slowing down the aging process, saying people should take care of their teeth and avoid over-exercising if they want to live longer lives.

Andrew Steele, a computational biologist and longevity expert, argues in his new book, Ageless: The New Science of Getting Older Without Getting Old, that people have more control over their aging process than they realize.

The London-based author appeared on the Today show on Tuesday to promote his research, explaining that interventions such as eating a healthy diet, avoiding smoking, and getting moderate exercise can all slow down the aging process and prevent different diseases.

‘I think a lot of us think that the aging process is this inevitable fact of life, that as we get older we inevitably get a high risk of disease, we get wrinkles, we get gray hair,’ Steele, 35, said. ‘But actually, by targeting the whole marks of the aging process, the underlying cellular and molecular causes of ages, we can slow it down globally.’

While speaking with Today, Steele also shared the seven healthy habits he has adopted in his own life to combat aging, and it seems that moderation is key. 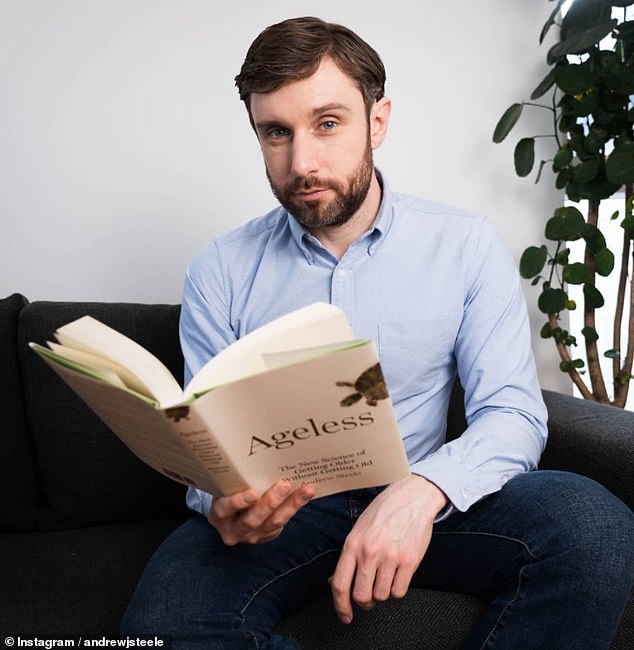 Habits to follow: Biologist Andrew Steele has shared his top tips for slowing down aging while promoting his new book, Ageless: The New Science of Getting Older Without Getting Old

Stay Active — But Don’t Overdo It

Steele warned against being sedentary and advised people who are sitting all day to try to move for at least five minutes every hour or so.

‘If you literally don’t do any exercise at all, even going for a 10-minute walk every day is going to dramatically improve your health,’ he told Today.

In his own life, Steele runs and cycles for an average of 30 minutes a day. He has also incorporated strength training into his fitness regimen after researching how crucial it is to mitigate muscle loss.

However, when it comes to lengthy sweat sessions, he said the benefits of working out seem to ‘plateau’ beyond an average of 30 minutes a day.

‘The evidence for incredible levels of exercise is quite weak. In fact, if anything it might slightly reduce your lifespan,’ he said.

Get the Right Amount of Sleep

Moderation is also important when it comes to sleep because staying in bed too long can actually be detrimental to your health.

Steele said he tries to get seven or eight hours of sleep per night, which is right on target with recommended guidelines.

Healthy adults need between seven and nine hours of sleep per night, according to the National Sleep Foundation, while babies, children, and teens need even more.

‘What’s really interesting about the sleep research is it’s not only getting too little sleep that seems to be bad for you, but also getting too much,’ Steele said.

The dietary supplement market is a multibillion-dollar industry, but Steele said they are actually unnecessary to take unless your doctor advises you to do so.

The scientist explained that people will get all the vitamins they need by following a balanced diet and spending time in the sun.

‘We’ve actually got huge amounts of trial evidence to suggest that there’s no point [in taking supplements],’ he said. ‘Vitamin supplements either had no effect on lifespan or actually slightly shortened it.’

The only supplement Steele takes is vitamin D because some studies suggest it may prevent severe COVID-19 symptoms following infection. However, he admitted that he doesn’t think it would do anything if he were to catch coronavirus. 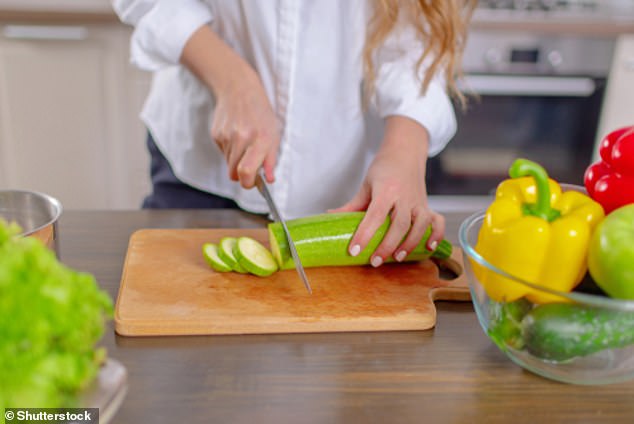 Plant-based diet: While the scientist eats everything in moderation, he makes an effort to consume more plants and less meat

When it comes to his diet, Steele said that he likes to focus on moderation and variety, but he also makes an effort to eat more plants and less meat, particularly red meat.

Healthy plant-based diets that emphasize higher intakes of vegetables than animal foods are associated with a lower risk of cardiovascular morbidity and mortality, according to a study published in the Journal of the American Heart Association.

Vegetables also tend to be lower in calories than other foods, which can help with weight management, among other things. Eating more veggies can also improve gut bacteria.

‘Just generally, it looks as though eating a plant-based diet is likely to be healthier, likely to make you live a bit longer, so that’s something I’ve tried to do,’ Steele said.

Monitor Your Blood Pressure and Resting Heart Rate at Home

In Steele’s book, he detailed how your blood pressure and resting heart rate reading can give you insight into both your heart health and overall well-being.

He is a proponent of at-home blood pressure readings because of white coat hypertension, which occurs when the readings at your doctor’s office are higher than they are in other settings.

How about that: Steele explained in his book that brushing your teeth can help deter heart disease and possibly even dementia (stock image)

Take Care of Your Teeth

Oral hygiene is about more than just staving off cavities, according to Steele.

The scientist explained in his book that brushing your teeth can help deter heart disease and possibly even dementia.

A recent study conducted by the NIA Intramural Research Program suggests that older adults with gum disease may be more likely to develop Alzheimer’s.

Meanwhile, previous research showed that people who brush their teeth less than twice a day had a higher risk of heart disease.

Steele noted that it’s important to care for your teeth and gums because the link to Alzheimer’s and heart disease may be chronic inflammation that starts with mouth bacteria.

Steele explained that there is not enough research to say for her certain that dietary restriction (reducing the number of calories consumed) or intermittent fasting (going specific times without eating) will extend the lifespan of humans like it does other organisms.

While he dabbled with only eating during an eight-hour window while following the popular 16:8 intermittent fasting plan, he was turned off it after a study showed that time-restricted eating doesn’t work for weight loss.

Steele noted the findings are complicated, and while he hasn’t completely written off intermittent fasting, he knows it’s not for him because not eating makes him ‘grouchy.’