Home » Lifestyle » Scott Morrison says he has listened to women so what is he going to do?

Scott Morrison says he has listened to women so what is he going to do?

Parliament House is looking more and more like the worst Mad Monday that’s ever occurred – except to say that is an insult to rugby league players, and I mean that sincerely.

The latest story – part pornography, part power play, and 100 per cent revolting – is that political a staffer has masturbated on the desk of a female MP. For a lark. 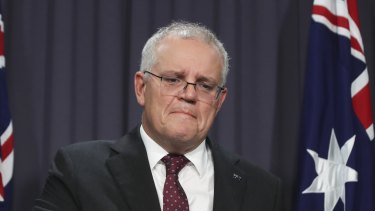 A visibly distressed Prime Minister Scott Morrison at a press conference in Canberra on Tuesday.Credit:Alex Ellinghausen

Then he and friends shared videos of this “lewd act”, as it’s more politely called.

Look, children: here is the House of Representatives. Here is the ministerial wing. Here is the prayer room – where, it has been reported, people have work-sex! Sometimes with sex workers!

This stuff has reached such a disgusting, roiling critical mass now that the Prime Minister couldn’t not do something big.

Scott Morrison needed to acknowledge the significance of the public feeling on what is erroneously called Parliament’s “women problem”.

So this morning he gave a press conference where he spoke from the heart, and was so distressed that he broke down.

He appeared to be overwhelmed and frustrated by a situation that has gotten out of his control.

“I am shocked, and I am disgusted. It is shameful. It is just absolutely shameful,” he told journalists.

It had been a traumatic month, Morrison said.

But while federal Parliament and its commentariat had been talking about sexual violence and harassment for a month, it was all women “who have put up with his rubbish and this crap for their entire lives, as their mothers did, as their grandmothers did”.

Morrison came close to apologising for his handling of the traumatic month, by acknowledging that “many have not liked or unappreciated some of my own personal responses to this”.

He seemed to get it, finally. He said he had listened to women. He listed the things that they complain of. Their fear of walking alone at night. The way they are overlooked for promotion and talked over in meetings. The way they are intimidated, objectified and marginalised.

None of it was okay, he said.

The Prime Minister acknowledged that many people didn’t like that he spoke to his wife Jenny about how to handle the rape allegation by Brittany Higgins, the shocking revelation that kicked off this horrendous news cycle.

But, Morrison said, his wife, his girls and his mother were “the centre of my life”.

It was Morrison speaking as a dad, and he broke down when he talked about his daughters.

He is right. Sexual violence against women is a deeply personal problem.

It is also one that requires structural solutions and strong leadership.

Morrison was finally showing strong leadership during this press conference, but he reverted to his “I don’t hold a hose, mate” persona when challenged.

He was asked a legitimate question from a Sky News journalist, pointing out that in a business environment, if all these things had happened on Morrison’s watch, his job would be in jeopardy.

As is often the case with Morrison, his defence was an attack – he said that in the journalist’s own company there had been a complaint involving a woman harassed in a toilet.

It was bizarre to blurt out such a rumour in a press conference, and also raised the question of how, if Morrison has heard rumours about harassment at News Corp, he never heard about an alleged rape in his own ministerial wing until it was reported (by News Corp).

On the question of structural solutions, Morrison offered some hope but made zero promises.

Asked about quotas to get more women into Parliament, he said, “My colleagues know I have been open to that for some time”.

And that is what Morrison will be judged on – whether his intentions lead to change on this issue.

Morrison made no undertakings to do anything. His government has still not implemented the recommendations of the Sex Discrimination Commissioner’s year-old report into sex discrimination in workplaces.

It seems clear that until there are more women in Parliament, its culture will not change in any meaningful way.

Because unless I’m moving in the wrong circles, it’s my belief that women don’t tend to share videos of themselves performing “lewd acts” in their workplace.

It’s not a women’s problem. None of this is.

Today the Prime Minister went a way towards acknowledging it is his problem, if only because this important cultural moment is unfolding on his watch.

After acknowledgement, we need action.