The Victorian lockdown is changing the national argument about who pays for statewide lockdowns and whether the country can afford too many more of them.

Prime Minister Scott Morrison and Treasurer Josh Frydenberg are making it obvious to all state and territory leaders that each jurisdiction must take primary responsibility for any sudden lockdown, including the cost of assistance to people who lose work. 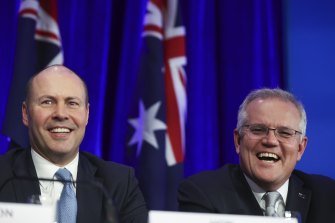 Prime Minister Scott Morrison and Treasurer Josh Frydenberg are putting the onus on the states to take primary responsibility for any sudden lockdown.Credit:Alex Ellinghausen

The blame game is no help to a Victorian worker who will lose pay this week because political leaders cannot agree on sharing costs.

But the stand-off reflects a fundamental belief within the Morrison government that many Australians are frustrated with several lockdowns.

Rather than stand side-by-side with Victorian acting Premier James Merlino and support the lockdown, the Prime Minister and Treasurer keep their distance. They do not want to be party to his decision. They did not criticise it last week, but supporting it with federal money is another matter.

Some federal sources believe the Victorian community may turn on Merlino over time rather than join him in blaming Canberra, but the risk is greater for Morrison. While the Prime Minister is likely to win or lose the next election in NSW and Queensland, he cannot afford a backlash in Victoria.

Only Morrison can explain why he said last week he would work “hand in glove” with the Victorian government but now turns down requests for financial assistance.

Victorians have not been robbed of federal help over time. The $45 billion in payments to Victorians through the pandemic has been worth about $6760 for every person in the state. The people of NSW have received slightly less: about $6409 per capita, based on total federal spending of $52.3 billion.

None of this means the states and territories are on their own from now on. If the pandemic gets worse, and long lockdowns are needed, the federal calculations will change. The key signal on Sunday was about the length of the restrictions.

Other states are more reluctant to impose lockdowns, of course. One question in Canberra is this: would NSW Premier Gladys Berejiklian impose a statewide lockdown in similar circumstances to those in Victoria? The hypothetical question illustrates a common view among Liberals that Victoria needs to break its lockdown habit.

But the Victorian government believes it can tap into a strong sense of grievance against Canberra. It was telling on Sunday that Merlino and the Victorian Treasurer, Tim Pallas, launched into their attack on Morrison and Frydenberg before they had really finished explaining their $250 million state assistance package.

Pallas even said at one point that he asked Frydenberg for a “piecemeal” or “pretend” contribution for Canberra, which suggests the state government wanted moral as much as financial support for its lockdown.

Morrison and Frydenberg chose not to inflame the debate at a press conference, partly for practical reasons. Morrison was in flight to New Zealand when the Victorians were flaying him in Melbourne, so it took time for him and others to check notes on their response.

Frydenberg was in Canberra, since he could not return to Melbourne once the lockdown began, but his first reply was only a Facebook. It looked like the federal government did not have the courage of its convictions.

But actions speak louder than words, so the federal refusal sends a message to all leaders. It sets a new benchmark for federal and state funding in the pandemic.

Our Morning Edition newsletter is a curated guide to the most important and interesting stories, analysis and insights. Get it delivered to your inbox.