A lobby group representing hundreds of post offices is urging its members to send Prime Minister Scott Morrison $5 notes to cover the cost of the Cartier watches given to four Australia Post executives as part of a campaign of support for embattled boss Christine Holgate.

Ms Holgate is digging in to save her career after standing aside last week as the government investigates expenses at Australia Post and considers a broader examination of public sector organisations amid concerns some are looking to "cash in on the public purse". 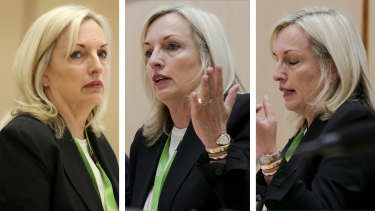 Christine Holgate gave evidence about the purchase of four Cartier watches, worth $19,950 in total, on Thursday. Credit:Alex Ellinghausen

Senate Estimates heard on Thursday Ms Holgate bought Cartier watches, worth a total of $19,950, in 2018 as rewards for four executives who helped seal a deal for banks to pay more to run their services through post offices.

The fallout from the luxury timepieces has opened up a rift between Ms Holgate and former Australia Post chairman John Stanhope, who poached her from health supplements company Blackmores in 2017. He left Australia Post in November 2019.

A card to one of the executives bears personal messages from both Ms Holgate and Mr Stanhope, but he has denied knowing the planned gifts would be luxury watches. “We left it for the CEO to decide the nature of that reward. I don’t recall being asked about how much would be spent,” he told the Australian Financial Review.

Ms Holgate is believed to have sent an image of this card to several government ministers.

The investigation, to be run by a yet-to-be appointed law firm, is expected to examine Australia Post's corporate culture broadly. The Finance Department has contacted former Australia Post staff and told them they will need to co-operate with the review.

Ms Holgate had previously spent $300,000 on corporate credit cards and chauffeur-driven cars in the 2019-20 financial year. It's also been reported executives routinely used company credit cards to pay for hair and make-up services.

Her term at the head of the organisation has divided opinion and prompted insiders to leak against her. She has sought to reduce postal delivery services and threatened to call police unless the City of Melbourne delivered more than 100 One Nation-branded stubby holders from Pauline Hanson into a locked-down public housing tower in July.

But licensees who run 2850 post offices around the country out of their newsagencies, pharmacies and convenience stores believe the [email protected] deal at the centre of the watch scandal saved their businesses.

She told Ms Holgate in their first conversation licensees in rural and regional areas would go out of business if something wasn't done to make the banks pay more.

"She saved us, and those people who worked on that team – how hard do you think it was to make the CEOs of the banks pay for a service that they had had for years for free?" Ms Cramp told this masthead.

"We are absolutely 100, 200, 1000 per cent behind her leadership and she is desperately needed for us to survive.

"Whatever this is about, it has got nothing to do with bloody watches."

Ms Cramp is organising a campaign for post office licensees to send $5 notes to Prime Minister Scott Morrison to cover the cost of the watches.

During the hearing last week, Ms Holgate justified the purchase of the watches by saying she hadn't used taxpayers' money because Australia Post was a commercial organisation.

Mr Morrison said that wouldn't pass any test with the public and that every board member or head of a government agency should have got his message "with a rocket" that it was not on.

Industry Minister Karen Andrews said the review into Australia Post and another examining executive expenses at the Australian Securities and Investments Commission were just the first step, if they found wider systemic problems that needed to be looked at across the whole public sector.

Ms Andrews said people in charge of public entities should be remunerated "appropriately", but not "over the top".

"If you are earning a significant salary, then maybe you can pay for your own hair and make-up, maybe you can do the pretty basic things that everyday Australians do to look after yourself and not constantly look to how you're going to up your remuneration by cashing in on the public purse," she told ABC's Insiders.

ASIC chairman James Shipton has stood aside pending the outcome of an investigation into his claiming of $118,557 in taxpayer funding to cover his tax advice. Deputy chair Daniel Crennan also claimed $69,621 in housing expenses. Both are repaying the amounts.