From humble beginnings in London’s club scene of the early 1960s to record-breaking world tours, Charlie Watts never strayed from the simple four-piece drum kit the Rolling Stones built their legendary sound and style around. 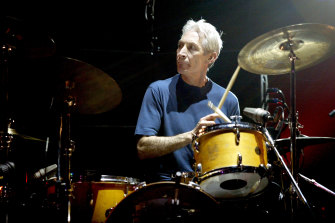 Charlie Watts had “the moves” that gave the Rolling Stones their groove.Credit:

A renowned drummer in his early 20s with a flair for jazz, Watts joined Alexis Korner’s Blues Incorporated before the Stones poached him in 1963. Guitarist Keith Richards knew from the moment he and former band member Brian Jones started jamming with Watts that he brought a special ingredient – the swing that gave the Stones’ bluesy rock ‘n’ roll its unique character. “He’s got the moves,” Richards said about Watts many years ago.

Watts personified the steady beat needed to keep a raging storm of guitars and rock star egos on track. On record and on stage, for six decades it was the unflappable Charlie Watts, the guy with all the moves, who gave the Stones their groove.

Here are six Rolling Stones songs that simply wouldn’t have the same swing without Charlie Watts.

Paint It Black (1966)
Opening with Brian Jones on sitar, Watts snaps the song out of its gentle, instantly recognisable string intro with a flurry of pounding beats before settling into a rock solid beat. The song has an uptempo edginess, its Middle Eastern influence and Jagger’s melancholy lyrics underscored by Watts’ precision and occasional cymbal accents. Written by Jagger and Richards while on tour in Australia, Watts allows the rhythm section to stand out without ever pushing too hard.

Stray Cat Blues (1968)
If you’ve ever wondered why the Stones were considered dangerous by mainstream society in the late ’60s and early ‘70s, listen to Jagger out front on this track while Richards and Brian Jones prowl around on guitar. In the midst of it all, there’s Watts. He makes it all appear so effortless – the special, magical ingredient that made Richards’ ears prick up when they first met. It’s only rock ‘n’ roll, but you’ve got to be damn good to make it sound this cool.

Gimme Shelter (1969)
Covered by other bands hoping to scale similar heights; nobody really gets close to the dark, menacing mood Watts brings to the song. Swedish rockers the Hellacopters did a very fine job of bringing the power but, for sheer impact, Watts makes restraint a feature of the song. It feels like the social upheaval of the late ’60s is spilling over and, yet again, there’s Watts charting a steady course as Jagger sings about “fire sweepin’ our streets today”. It’s the Stones at the peak of their powers.

Tumbling Dice (1972)
Quite possibly the smoothest groove – among many standout tracks – from the band’s legendary 1971 sessions. Mostly recorded while Richards was living in the rented villa Nellcote in the south of France, Watts would travel to and from the Exile on Main St. sessions from miles away, preferring to avoid much of the late night revelry. The wonderfully loose groove on Tumbling Dice is typical of the album’s overall feel and without Watts’ steady hand and subtle fills it wouldn’t be the classic that gets you out of your chair dancing or settles you down after a long night on the tiles.

When The Whip Comes Down (1978)
When the Stones released their Some Girls album, disco and young punks with snotty attitudes were topping the charts and snatching headlines. Meanwhile, Charlie went about his business on this rip-snorting little rock song. Cracking into his snare drum and shufflin’ up the beat, it’s about as wild and loose as Charlie gets near the end.

Start Me Up (1981)
The slow, sizzling hi-hat that Watts opens with just behind Richards’ famous guitar intro is where this song from Tattoo You goes from cool to groovy. Forty years since its release it’s still timeless – like Charlie Watts, who would have been equally at home playing in a smoky jazz bar as playing the biggest stages in the world. If the song doesn’t highlight just how cool Charlie Watts was with his sticks, check out the film clip for the grin he gets while Jagger is prancing around in his tight purple T-shirt and tracksuit pants. It’s classic Charlie, keeping time like a fine Swiss watch with a cheeky smile on his dial.