Australians who grew up with Storm Boy are old enough to have children of their own. It’s a factor, no doubt, in the recent surge of adaptations – none of them possessing the same desolate magic as the landmark 1976 film.

That isn’t simply the echo of my own childhood nostalgia which, as anyone who has revisited things they loved when they were small knows, is often weathered by memory into a kind of pristine landscape of the mind, acquiring a grandeur best left undisturbed. 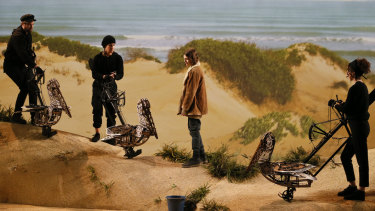 Storm Boy is not really suited to the stage.Credit:Jeff Busby

The 2019 movie reboot was compromised by an implausible framing narrative that megaphoned environmental themes with an overpowering didacticism. If there’s no equivalent flaw in Tom Holloway’s play – first mounted by Barking Gecko and the STC in 2013, reimagined here in a striking production by Sam Strong – it still runs up against the limitations of theatre.

Storm Boy is in many ways ill suited to the stage. It’s set on the wild and windswept dunes of the Coorong in South Australia. It involves pelicans and – almost as inarticulate – lonely and laconic Australian males. Much of its emotional heft is unable to be verbalised, and the language of theatre design doesn’t always have the vocabulary to pick up the slack. 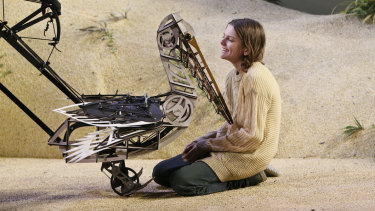 Where Anna Cordingley’s design in Jasper Jones created an immersive world, here it feels ersatz. It's not through lack of talent – Cordingley skilfully blends 3D dunes into background projections of the ocean – but the night creeks and outback town in Jasper Jones were easier to suggest than the immensity of untouched wilderness.

Inevitably, projections get overused, leaching a sense of liveness, and if Darrin Verhagen’s score has moments of quiet perfection, it swells to cinematic effect in the face of what verges on nature documentary.

The puppetry used for the pelicans and other wildlife, while brilliant, disturbingly recalls the mechanical artifice of War Horse. That show's mechanical puppets were thematically appropriate because they captured the pathos of domesticated creatures being used as killing machines. Here, they are a bleak reminder that if we keep buggering up the planet, metal skeletons might be all that’s left of the fauna. 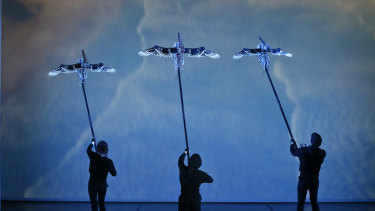 The acting is strong, even if the script doesn’t give us much to hold on to. Conor Lowe as Storm Boy channels a luminous fragility; John Batchelor as his embattled recluse of a father portrays a man trapped in a grief that softens, movingly, into humility. Tony Briggs is poignant and funny as Fingerbone Bill – his wisdom and resilient “dad humour” washing over the melancholy of the story like an ocean wave.

The most eloquent moment comes with the death of Storm Boy’s beloved pelican Mr Percival, when the puppeteer gently brushes the boy’s face with her hand before leaving the stage. That gesture – a collision of nature and artifice that evokes a memory of the boy’s lost mother – is quietly devastating. It helps redeem those aspects of Storm Boy that throw into sharp relief the limits of theatrical adaptation.