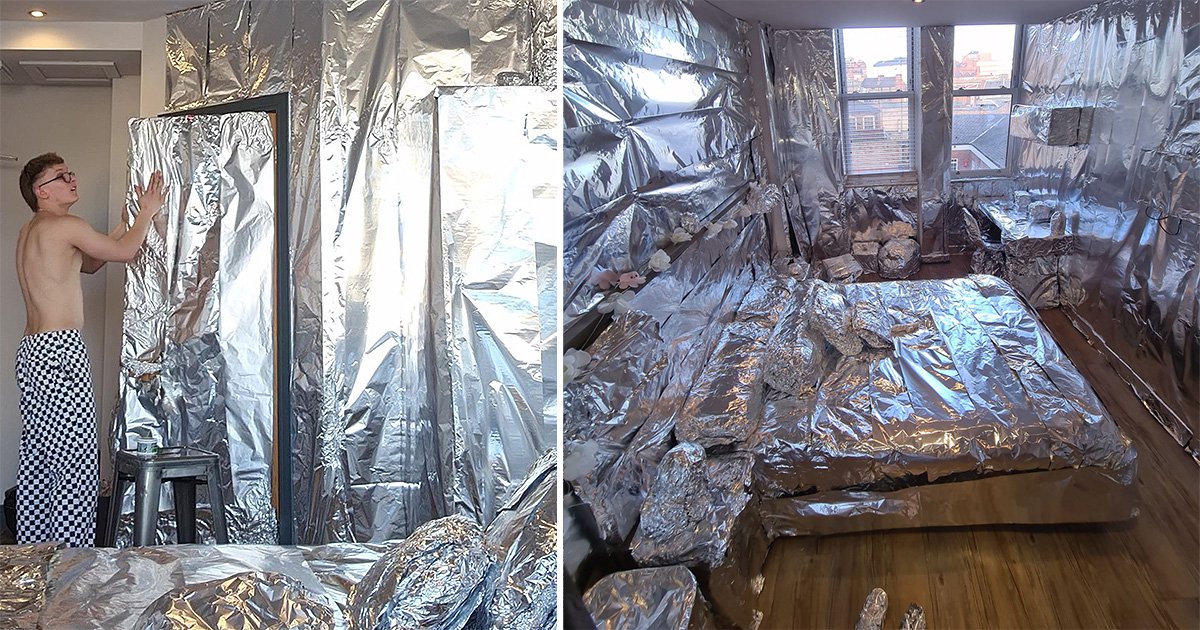 If you are looking to take revenge on an enemy, we have just found the perfect inspiration.

A student in Nottingham got the ultimate last laugh on his neighbour for swapping his mattress for an old one by decorating her room in 360 metres of tin foil.

And when we say he covered the room, we mean it, because the DIY-handy student even took time to wrap up her sex toy.

Nat Openshaw saw a golden opportunity to teach his uni pal Katy Hughes a lesson when she left her bedroom door unlocked upon travelling from Nottingham to visit family in Sandbach, Cheshire, last month.

Scheming 21-year-old Nat, who lives in the flat above, spent more than five hours decorating everything from Katy’s toilet to walls. In total, he used 20 rolls of tin foil (each 18 metres long) which cost him £20 pounds to buy.

Katy returned to her digs five days later but was left shocked when she realised what had been done.

Nat shared two clips to TikTok that have collected some serious views and has even justified his efforts.

He said Katy switched his soft foam mattress for an old spring one and added that he didn’t notice the change until he went to bed. Nat noted that the revenge plot was easy to execute.

‘They never really lock their individual flat doors, so I knew her room would be unlocked for about a week or so and wondered what I could do,’ he said.

‘I realised that it’s quite a hard, flat room. There’s no soft furnishings, so I thought I’d cover it in tinfoil. I Googled it and there was a how-to, and I’m quite handy with DIY so I thought I could easily do this.

‘I went down to Poundland and bought 20 rolls and a whole roll of tape. From start to finish it took me from 11am to 6pm with an hour and a half break for lunch.’

He continued: ‘I started at the bottom end of the room, then realised it was going to take ages, so I started on the big things so if I didn’t finish it, it would still look good. The walls were quite easy to do because they were flat and straight, but the hardest bit was doing the bed and I had to get some help on that.

‘Katy wasn’t very happy [about the dildo’s involvement], But I thought, ‘why not?’, because it’d make the video funnier and I wasn’t going to spare her the embarrassment of leaving it out.’

‘Seeing her reaction made it completely worthwhile,’ he explained. ‘She was more in a state of shock than anything. 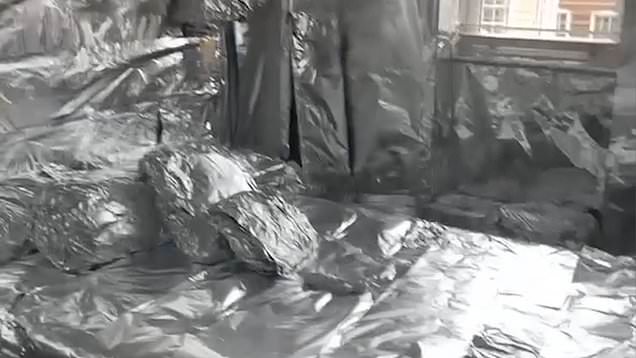 ‘There was definitely some frustration in there. She just couldn’t believe it and didn’t know what to say. She knew it was me straight away because this is the kind of thing I’d do.

Katy, who is studying for a masters in digital marketing, saw the funny side of the prank but claimed she needs some help to plot her revenge.

‘I was so shocked. I even looked in then shut the door and walked back out again to check if this had definitely happened,’ she said.

‘I’ve definitely learned my lesson to lock my door. I didn’t really have time to pull everything down that night, so it was about two days before I got the courage. It took about an hour.

‘I don’t know why he did it to me. If anyone thinks of how I can get revenge I’ll go with it, but I wouldn’t want to put as much effort in as he did. That was a lot.

‘I’d go for something less time-consuming and less expensive. £20 on tinfoil? What a waste.’

Send us an email at [email protected]