New tax breaks can save some Australians tens of thousands of dollars when buying electric vehicles, but motoring experts say those cars might be difficult to get, with waiting lists blowing out.

Late last year, the federal government introduced tax concessions for electric vehicles purchased on a novated lease, where buyers sacrifice part of their salary through their employer to pay for the loan. 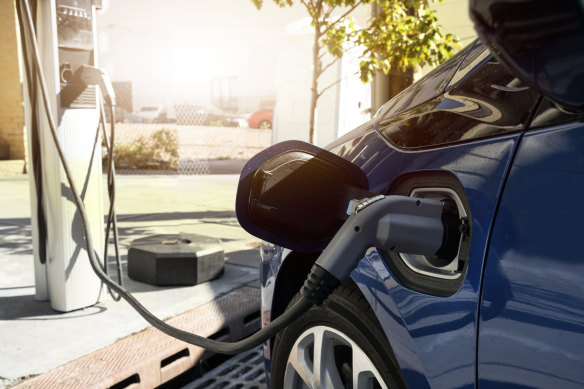 Electric vehicles are now cheaper for some, but those buyers face long waits for cars.

Andrew Kerr, director of sales and marketing at novated leasing company Inside Edge, said the change had essentially removed the fringe benefits tax (FBT) liability that would previously have had to be paid, and which still applied to fuel vehicles.

“The recent changes have removed the FBT liability, therefore enabling all costs to be paid for in pre-tax dollars,” he said.

Inside Edge analysis showed that while someone buying a Toyota RAV4, for example, would save about $10,000 using a novated lease compared to a personal loan, if they purchased MG’s ZG electric wagon at a comparable price for a similar loan time, they would save more than $20,000.

At the luxury end of the car market, the differences are even starker.

But Tony Greco, general manager for technical policy at the Institute of Public Accountants said not everyone would be able to access the tax discounts, as you needed to have an employer to get a novated lease.

“If you’re a contractor working for yourself … you’re out. If you’re a retiree and you want to purchase an EV, it’s of no use because you’re not employed,” he said.

“It’s only attractive to those people who actually work for someone under an employment contract, and secondly, the employer allows them to package a vehicle. It’s a huge benefit to a small group who work for employers.”

Greco said there would be broader benefits down the line as more electric vehicles enter the second-hand car market, but that could be three or four years from now.

Federal Chamber of Automotive Industries chief executive Tony Weber said anyone after an electric vehicle would be waiting a long time, regardless of how they paid for it.

He said the government needed to do more to ensure more electric vehicle products were allocated to Australia.

“Most vehicles in the marketplace are having delays, some [electric] vehicles in excess of 12 months at the moment,” he said.

“I think the situation is improving, but it’s improving from a low base. So, we have a long way to go.”

A major challenge is that supply across the globe is still trying to keep up with demand from earlier months.

The Australian car market was competing with larger markets like North America, China and Europe, Weber said, and Australia has to work hard to make sure the local market is taken seriously.

“You need to be sending out a signal to the marketplace that we’ll put as many battery electric and low emission vehicle technologies into the Australian market as physically possible,” he said.

A government-mandated fuel efficiency target would also give Australians access to a wider range and greater volume of vehicles, he said.