Taylor Swift is one of the most popular celebrities and successful musicians in the world, and her cat, Olivia Benson, isn’t doing too bad for herself either. In fact, she’s doing purrfectly well.

According to a new report from All About Cats, TSwift’s Scottish Fold cat, who is named after Mariska Hargitay’s “Law & Order: SVU” character, is worth $97 million, making the feline the third-richest pet in the world, which is pretty pawsome.

Per All About Cats, Olivia “earned her fortune starring alongside her owner in several music videos, has crafted her own merchandise line, and has had cameos in many big-budget ads, including for the likes of Diet Coke and Ned Sneakers.” 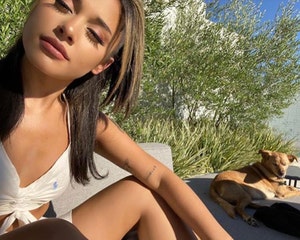 40 Celebrities Who Love To Show Off Their Adorable Pets

Taylor got Olivia in 2014. She is the Grammy winner’s second cat and is the youngest “sister” to Meredith Grey, another Scottish Fold. Taylor’s third cat is a Ragdoll named Benjamin Button, who was born in 2019. All of the adorable felines have made appearances on her social media profiles.

However, when she was just a cat mom of two, the “Anti-Hero” singer spoke about the term “cat lady” while appearing on “Live with Kelly and Michael” back in 2014.

“Before I got the second cat, I was kind of canvassing everyone I knew, going, ‘Is cats, cat lady?'” Taylor said at the time. “Two cats is cats, and there’s more than one. But they’re like, ‘No, three cats is a cat lady, two cats is a party.'”

In 2021, the “Bejeweled” singer shared a TikTok that featured a clip from the talk show appearance on TikTok, before it then hilariously cut to her dancing with Olivia and Meredith.

While Taylor’s cat Olivia nabbed the number three spot on All About Cats’ list, she was neck and neck with pet influencer Nala Cat, whom the site reported is worth $100 million.

Who is the world’s richest pet? A German shepherd named Gunther VI, who is owned by the Gunther Corporation, and is reportedly worth a whopping $500 million.

Meanwhile, in addition to Taylor’s feline, other celebrity pets who were among the top 10 richest pets, include Oprah Winfrey’s five dogs, who will inherit $30 million; late designer Karl Lagerfield’s cat, Choupette, who inherited $13 million following his passing; and Pontiac, late actress Betty White’s Golden Retriever, who is set to inherit $5 million in the wake of her death.

See the full list of the richest pets, here.