Taylor Swift is so, so tired of the men in her life getting to finish before she does. Yes, that’s a lame Kanye West joke, but it’s more relevant now than ever. On Sunday, June 30, Billboard announced Scooter Braun acquired Big Machine Label Group for over $300 million dollars, which included Swift’s music catalog. According to Swift, this is her worst nightmare. Taylor Swift’s open letter about Scooter Braun accuses him and Justin Bieber of bullying her along with the "how" and "why" this new exchange is so emotionally damaging to her. She shared the long-winded letter on her Tumblr account which has since warranted responses from Bieber and Big Machine Label Group.

Swift began her letter by stating, "For years I asked, pleaded for a chance to own my work. Instead I was given an opportunity to sign back up to Big Machine Records and ‘earn’ one album back at a time, one for every new one I turned in… I walked away because I knew once I signed that contract, Scott Borchetta would sell the label, thereby selling me and my future."

She continued with some "fun facts about today," writing, "I learned about Scooter Braun’s purchase of my masters as it was announced to the world. All I could think about was the incessant, manipulative bullying I’ve received at his hands for years." From there, Swift got specific, adding,

Swift also included a screenshot of what appears to be West and Braun, FaceTiming with Bieber who wrote the caption, "Taylor Swift what up." 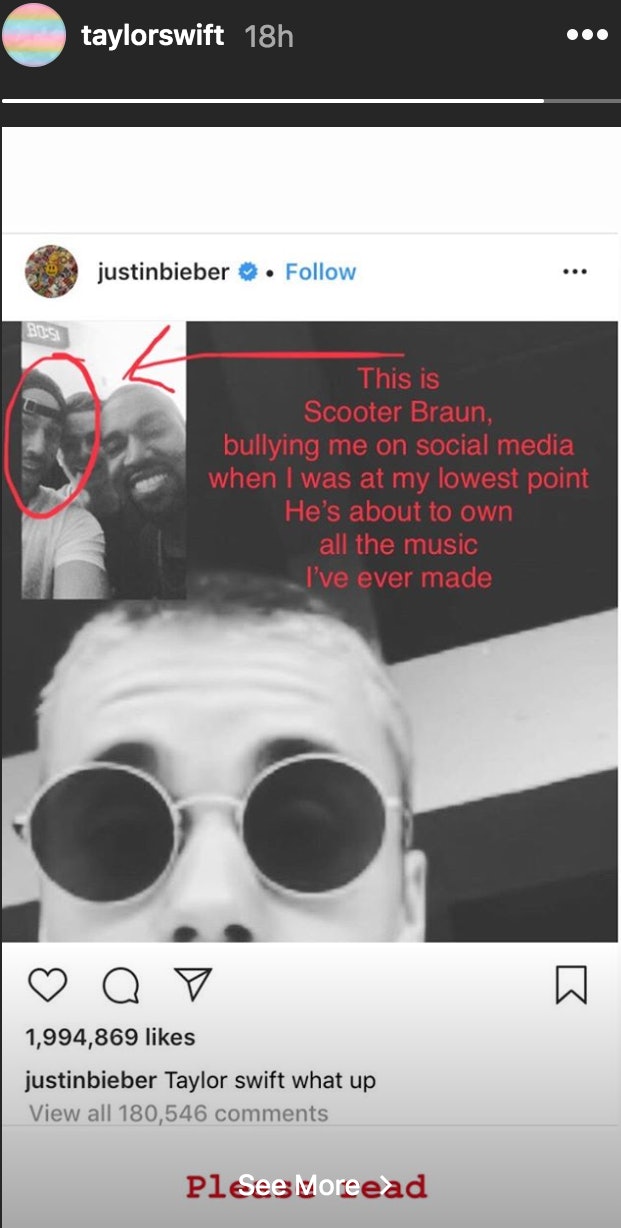 From there, she stated this is her "worst case scenario."

"When I left my masters in Scott’s hands, I made peace with the fact that eventually he would sell them," she wrote. "Never in my worst nightmares did I imagine the buyer would be Scooter."

Swift concluded, "Thankfully, I am now signed to a label that believes I should own anything I create. Thankfully, I left my past in Scott’s hands and not my future. And hopefully, young artists or kids with musical dreams will read this and learn about how to better protect themselves in a negotiation. You deserve to own the art you make."

She signed her letter, "Sad and grossed out [heart break emoji], Taylor."

Semi-surprisingly, Bieber wasted no time responding. He took his own personal letter to Instagram where he shared a major throwback photo of himself and Swift standing together when they were much, much younger.

"Hey Taylor. First of all i would like to apologize for posting that hurtful instagram post, at the time i thought it was funny but looking back it was distasteful and insensitive..," he began.

Bieber continued, "I have to be honest though it was my caption and post that I screenshoted of scooter and Kanye that said ‘taylor swift what up’ he didnt have anything to do with it and it wasnt even a part of the conversation in all actuality he was the person who told me not to joke like that..’ In fact, Bieber seems to think — ‘Scooter has had your back since the days you graciously let me open up for you.!’

He went on, "As the years have passed we haven’t crossed paths and gotten to communicate our differences, hurts or frustrations. So for you to take it to social media and get people to hate on scooter isn’t fair. What were you trying to accomplish by posting that blog? seems to me like it was to get sympathy u also knew that in posting that your fans would go and bully scooter."

For Big Machine Label Group CEO Scott Borchetta’s part, he jumped online to share his truth too. He wrote a short essay called "So, It’s Time For Some Truth…" where he outlined his experience and communication with Swift regarding her music, ownership, and what happens now that Braun is in the picture. According to him, it is nearly impossible that Swift "woke up to the news" when everyone else did. For one thing, Swift’s dad is reportedly a shareholder in Big Machine and should have reportedly been first alerted of the news on June 25, five days before the information went public. Secondly, Borchetta says he texted Swift personally on Saturday, June 29, so she could hear the news from him.

Borchetta also claims that "100% of all Taylor Swift assets were to be transferred to her immediately" under the conditions of the new deal Big Machine Records offered her to renew her contract with them. He attached photos of the contract to back his claim and claims her "management team and attorney Don Passman went over this document in great detail and reported the terms to her in great detail."

Borchetta also maintains he has never heard Braun say a negative word about Swift, writing, "Scooter was never anything but positive about Taylor… Scooter has always been and will continue to be a supporter and honest custodian for Taylor and her music."

So, what happens now? Swifties are certainly paying as close attention to their Queen as ever and gobbling up her new Lover album just the same.