As the smoke rolled down the hill of her beloved valley, Barbara Pritchard thought to herself: I've lost everything.

The artist and her husband threw a few belongings in a van and sought refuge in a nearby town. It was the day before New Year's Eve. The communities huddled around the Upper Murray were under attack. 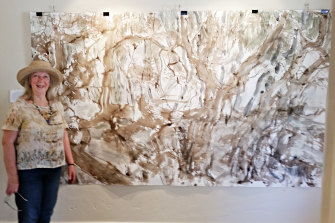 Pritchard has lived on her off-the-grid property in Walwa, east of Albury-Wodonga, for about 40 years. For most of that time, her art has been preoccupied with the local landscape — the rolling hills and twisted gums.

But after the fire front moved on, Pritchard's son inspected the property. He was stunned. While a small cottage had burned down with 10 of his mother's paintings inside, the family home had survived. So, too, had Pritchard's studio space. Inside was her life's work.

"There's probably 60 paintings in the studio," Pritchard said. "I had come to terms with losing everything. When I found out it wasn't all lost, it was a bit confusing. Which seems strange. And of course, with the confusion came a feeling of ecstatic gratitude. It's hard to describe." 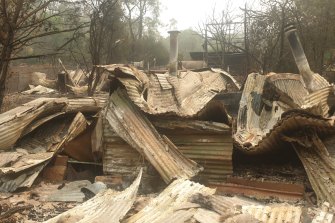 Pritchard says she plans to run workshops for local children affected by the fires. She has a background in nursing and midwifery and believes art is one of the ways her community can heal.

"We can do works on paper from charcoal that we scavenge and put them up, possibly in an exhibition or for sale," she said. "Something like this really transforms your life as well as your practice.

"There's a lot of emotions that can be suppressed in crisis situations. Art can draw us out of those emotions, especially children who may not have always been included in the drama or the conversations but are feeling stress from the adults around them."

Michelle Atlas, a lecturer in art therapy at La Trobe University, agrees. She has previously worked with children affected by bushfires north of Melbourne.

"It is so powerful to create something out of what was destroyed," she said. "Sometimes words aren't dimensional enough to convey a feeling or experience."

Like several others in her community, Ms Pritchard will return to her property on Tuesday for the first time since evacuating.

"I'm going to check on my vegetable garden," she said. "We're so isolated that we grow a lot of our own vegies. Then I'll go have a look at the destruction."

Can, healing, start, the, Upper
Celebrities