Home » Lifestyle » The importance of being ridiculously flexible

The importance of being ridiculously flexible

Instead of fighting over Algernon and Jack, the two actors at the centre of a frenetic production of The Importance of Being Earnest did the polite thing and shared. Jon Haynes and David Woods – aka Ridiculusmus – perform all nine characters, executing rapid costume changes behind the scenes and at one point juggling six characters on stage at the same time. Haynes admits they did have their favourites, but surprisingly, there was no competition for one of Oscar Wilde’s most famous characters – Lady Bracknell.

“I wanted to play Miss Prism and David was keen on playing Cecily but Lady Bracknell we were kind of indifferent about,” he says.

Actors through the ages have longed to play the imperious, intimidating Lady Bracknell, who has some of Wilde’s most withering lines. With her elaborate hats and manners, she is the self-styled chooser of husbands for the young and chastiser of the rapscallions who arrive as ill-disciplined suitors. 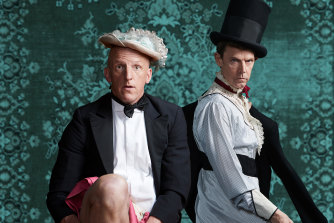 David Woods, left, and Jon Haynes – aka Ridiculusmus – in The Importance of Being Earnest.

The lady sits at the heart, but is by no means the only attraction, of Wilde’s entertaining and apparently ageless play, which was first staged in 1895. Haynes says the governess, Miss Prism, a more mousy type, appealed to him, ‘‘maybe because there’s a melancholy side to her’’.

‘‘I’ve seen very nice interpretations by people like Celia Johnson and Margaret Rutherford and Anna Massey and they rather touched me and I think that’s missing in the other characters.’’

Prism, while primly flirting with the parish priest, is part of the play’s great reveal – the consequences that ensue from a lost handbag. It’s the most substantial plot point amid the generally self-absorbed lives of the superficial young things eating cucumber sandwiches in late Victorian England.

Triviality wasn’t confined to the British aristocracy, Haynes suggests. “Where once Lady Bracknell said, ‘We live in an age of surfaces’, she might now say we live in an age of devices. Smartphones and Instagram and selfies and our bios – we’re all presented through social media.”

Ridiculusmus has been a touring, repertory ensemble of two for 27 years with a highly original approach and a broad range – from Earnest to plays exploring issues such as ageing and the representation of people living with disabilities. Working closely together on- and off-stage has kept Ridiculusmus together despite the two now living on separate continents: Woods in Australia and Haynes in Britain.

Humour and physicality characterise their shows, and this Earnest – a revival of a production that premiered in 2004 in Brisbane – peps up the play for new audiences. 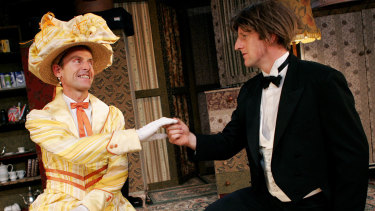 Jon Haynes, left, and David Woods in an earlier production of The Importance of Being Earnest.Credit:Tristram Kenton

‘‘There’s one scene where there are six characters on stage at the same time,’’ Haynes says. ‘‘I won’t give it away but we find a way of doing that and we also find a way of swapping Lady Bracknell, and swapping costumes, in the middle of a line. We have a very dexterous dresser called Wendy behind the scenes. She’s become a very integral part of the show, even though you never see her. Backstage it’s a performance in itself. There really should be a camera trained on the wings, it’s almost like a ballet.

‘‘We know each other’s bodies so well, how to get an arm into a costume in a hurry. At every performance, something goes wrong and our style is always to acknowledge mistakes and draw attention to them rather than try to pretend things are going well.’’

‘‘I went to our storage unit in South London to sort out the set, to have it shipped to Australia. When I opened the hatbox containing Lady Bracknell’s hat there was a terrible stench of decay and death. It had had a stuffed guinea fowl on top and maggots had actually eaten the hat. So another hat has been ordered. We’re on our third Lady Bracknell hat this time.’’

Something goes wrong and our style is always to acknowledge mistakes and draw attention to them rather than try to pretend things are going well.

The indignity of a vulgar wardrobe mishap could make a subplot in itself, but a classic story has no need of updating. Wilde’s plotting is as clever as his language. Algernon and Jack may or may not have brothers or ailing friends, but something takes them away on mysterious weekends and they have yet to prove themselves worthy of Cecily and Gwendolen – sweet things who draw on their own wit and wisdom when necessary.

Everyone and everything is gorgeous and sumptuous – opulent London homes and country conservatories. What lifts this period piece above others is the torrent of witty lines. British writer Mark Lawson claims Earnest is ‘‘the second most known and quoted play in English after Hamlet’’. For more than a century, the play has inspired operas, musicals, parodies and gay readings that probe the possibilities of ‘‘bunburying’’, Wilde’s invented word for sudden absences. A 2002 film was a star-studded affair, featuring Judi Dench, Colin Firth and Reese Witherspoon.

‘‘People ask about its relevance today and I’ve come to the conclusion it’s actually a piece of fun,’’ Haynes says. ‘‘Wilde was trying to make money, he was actually deliberately trying to write a commercial hit because he was running up huge debts, like Algernon in the play. He studied the French farces very closely and tried to replicate those plots that he knew were going to be hits. His friends would help him in this too, noting down the aphorisms he would come out with in his dinner conversations. So he’d put them in the mouths of the characters and the play is in many ways the vehicle for their epigrams, which is the basis of his wit.’’

Ridiculusmus is in the main faithful to the text, with slight changes. ‘‘As part of the adaptation process which we did with [director] Jude Kelly back in 2004 we realised we had to shorten the play so we filleted the text because some lines just weren’t funny or necessary any more. Also – spoiler alert – Lady Bracknell can’t bring herself to say the word handbag, she’s so horrified by it!’’

Reuniting in Melbourne, the two actors will also develop a new work during their season of Earnest. As co-creators, they occasionally disagree but don’t argue, Haynes says. ‘‘We’re good listeners … and I think we’re quite different. David is more physical than I am, he trained in clowning, which I didn’t; I’m more a from-the-neck-up actor. Perhaps that’s what keeps it fresh, we have to accommodate our differences.’’

The Importance of Being Earnest is at the Malthouse Theatre, February 14 to March 8.

Related posts:
being, importance, of, ridicu, the
Celebrities