Home » Lifestyle » The motel from ‘Schitt’s Creek’ is a real place in Canada, and the owner is about to put it up for sale 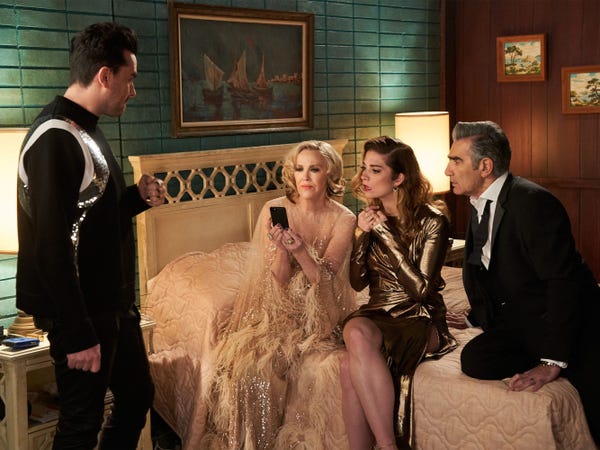 "Schitt's Creek" fans, take note: The Rosebud Motel could soon be yours.

Earlier this month, the hit Canadian comedy series became the first comedy to take home nine awards in a single night at the 2020 Emmys. The show, which aired its sixth and final season on PopTV in January, follows the journey of the Johnny, Moira, David, and Alexis Rose, a once-affluent family of four who move into the rundown Rosebud Motel in the town of Schitt's Creek after losing their fortune.

While the name Rosebud Motel is fictional, the building is a real place in Orangeville, Canada, about an hour outside of Toronto.

Best Wishes, Warmest Regards | Following the series finale on Tuesday night, stay with us for a very special one-hour documentary celebrating #SchittsCreek and the making of the final season.

"It'll be up for sale next month," owner Jesse Tipping told the Orangeville Banner.

Tipping, who serves as the president of a high school basketball prep program in the area, purchased the former motel in 2011 and used it as housing for recruits. Starting in 2014, the cast of "Schitt's Creek" rented it for about a month each year, he said.

Since the show's debut, the building has become a pilgrimage spot for die-hard fans. "They're always so happy to see the place," Tipping told the Orangeville Banner. "Everybody says you need to turn it into the Rosebud Motel."

Fans on Instagram have posted photos using the location tag "Rosebud Motel" along with show catchphases like Alexis' "Ew, David!"

Tipping said that he planned to list the property earlier in the year, but held off due to the pandemic. He has not yet announced an asking price.

The building consists of eight apartment-style rooms, each with its own kitchen and refrigerator, as well as a three-bedroom home.

While the future of the motel will be up to its next owner, rave reviews for the fictional Rosebud Motel on Google suggest that it would fare well as a themed hotel or vacation rental.