Decadance has become an unexpected focus of this year’s Sydney Festival with a boycott launched after it was revealed the production was financially backed by the Israeli embassy. There were protests outside the Sydney Opera House on Thursday and creators continue to join the boycott, but the opening night performance shifted the focus back to the art form. 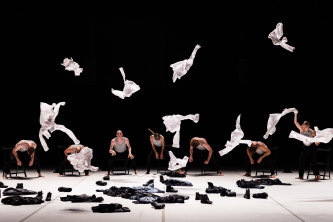 Decadance became the focus of boycotts after the Israeli embassy donated $20,000 to help stage the dance work. Credit:Daniel Boud

The good news is that Ohad Naharin creates the kind of choreography which suits the current crop of Sydney Dance Company performers. It is a style he has been credited with calling his own for his insistence on the need to listen to the body. To see it in action, it can be described as athletic to the point of toughness; demanding on arms, legs and torsos to find angles and fluid connections you would never have envisaged; contrasting in its mingling of solos and large ensembles of up to 17 dancers. And among the mainly serious sequences, there is a sense of humour.

Dance goers may remember Naharin from the invigorating choreography he brought to Australia several decades ago. Later, he became artistic director of Israel’s Batsheva Dance Company, and Decadence is a collage of excerpts from six works he made between 1990 and 2011. It is a moveable feast, in that he has added and subtracted from it over the years.

The result is a cavalcade of snippets that range from dull to exhilarating – luckily more of the latter. There are moments of thrilling dance and dramatic intrigue among sequences that could leave you wondering why they were there. 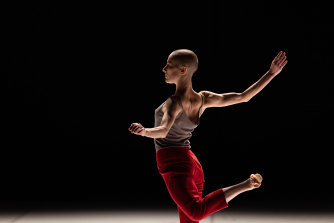 The highlight of the 75 minutes is a male duet danced by Dimitri Kleioris and Dean Elliott with sensitivity, passion and the skill to express emotions through evocative movement of the utmost intricacy. It is breathtaking.

Individually, the dancers introduce themselves in voice-overs as they perform technically demanding solos – an interesting selection of information and action.

Collectively, they gather at one point in matching black suits in a semi-circle of chairs on which they sit, pivot or stand, eventually hurling away their outer garments and stripping to their undies. All except one, who remains fully clothed to the end.

While that is visually dramatic, early ensemble sequences in unexpectedly drab outfits of everyday tights or trousers and tops are interesting for choreography that divides groups playfully into interactive small vignettes.

Behind the varied action is music that matches it, from delicate to the rousing vigour of community song and dance.