In 2009, Colson Whitehead published a comic piece in The New York Times wondering what kind of book to write next, and satirically listing the possible genres: Allegory, Fabulism, Encyclopaedic, Social Realism, to name a few. He said he had already hit a couple on the dartboard, and then went on to score major prizes with another, the Novel of Black Southern Misery; in fact, he wrote two: The Underground Railroad, about an escaped slave, and The Nickel Boys, about a brutal reform school.

Thriller was another possibility, and now here it is, a gangster tale that recreates early sixties Harlem, from the Hotel Theresa – the black Waldorf – to Mount Morris Park, where the bodies get dumped. 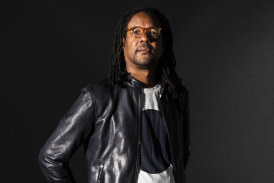 Colson Whitehead reverses the traditional narrative codes, in which white people are the protagonists and black people get walk-on roles. Credit:Simone Padovani

Whitehead’s first book, The Intuitionist, was a postmodern fantasia about elevator inspectors (Allegory); the hero of his latest, Ray Carney, is also trying to go up in the world. He owns a furniture showroom in Harlem, selling a piece – or three pieces – of the good life to aspirational black people. His own domestic set-up is modest, right next to the El (the elevated train), but he likes to walk past the monumental apartment houses on the Hudson, looking up at their windows and wondering which will be his one day.

Naturally, Ray loves the American Dream: “The way he saw it was, living taught you that you didn’t have to live the way you had been taught to live. You came from one place but what was more important was where you were going.” It’s an idea that can only seem a hostage to irony: no sooner have you read the words than you start to wonder how Whitehead will prove them wrong.

The place Ray comes from is poverty, with a small-time crook for a father, now dead, and a cousin named Frankie, another small-timer in the Harlem underworld and very much alive. Harlem Shuffle is true to its form: gangster fans will hear the rhymes with The Roaring Twenties and Mean Streets – buddies who find themselves on plot-generating divergent paths, marked with themes of loyalty and betrayal.

Then again, we soon learn that Ray himself isn’t as squeaky clean as all that. He might want to live differently from how he was taught, but that doesn’t stop him from occasionally fencing a bit of jewellery, or taking delivery of TVs that have fallen off the back of the proverbial truck. And so, Frankie thinks Ray might want to get in on a deal far bigger than anything either of them has ever handled before.

The straight and narrow ascent, on the other hand, all that is not Frankie, appears to be represented by Ray’s attempts to join the Dumas Club, where the Harlem elite meet, and by Ray’s parents-in-law, plushly named Alva and Leland (he an accountant to that elite), who had higher hopes for their daughter than marrying someone they refer to as “the rug-peddler”.

Whitehead, winner of two Pulitzer prizes for fiction, is as scathing about black gentility and snobbery here as he was in John Henry Days (the Encyclopaedic one, by the way), with another angle to the critique. In Harlem Shuffle, they’re not only emotionally repressive, but another racket: black capitalism turns out to be black people ripping off other black people. It is a bit of a flaw that Ray’s in-laws are more vividly drawn than his wife.

Whitehead makes sure that Elizabeth doesn’t exist simply in relation to Ray: she works for a travel agent, booking her clients into non-restricted hotels, and later organising accommodation for civil rights activists. All this means, though, is that she’s largely just a conduit for the Broader Historical Background. And as far as her relation to Ray goes, she is the one from whom everything must be hidden, and also the one whose worldly acumen doesn’t extend to getting wise to her husband’s double life.

For a substantial part of the book, Whitehead reverses the traditional white narrative codes, in which white people are the protagonists and black people get walk-on or non-speaking roles, or if they’re lucky, are allowed to be sidekicks. For the first two-thirds, white people don’t matter very much: it’s all about black people on top, whether it’s the Harlem mob or the grandees of the Dumas Club; it’s about black agency.

Later, the perspective shifts, and this self-contained black society is shown to nestle inside a larger dispensation. One of the things gangster stories are about is who is really in charge, where the power really lies, and how that power comes from the barrel of a gun. And if, in Black Panther H Rap Brown’s evergreen line, violence is as American as cherry pie, so are privately owned cops and hard-driving real estate deals.

Once a writer of maximalist tendencies – “overwriting”, to the unsympathetic – fond of recondite vocabulary and richly detailed, two-page descriptions of frozen convenience meals, Whitehead has been stripping his style back for a while now: The Nickel Boys and The Underground Railroad owed a lot of their intensity to the starkness with which they brought forth their horrors, and the subject matter kept Whitehead’s humour toned well down.

Harlem Shuffle isn’t stark, and doesn’t lack for wit – it’s made for pleasure – though the prose is still lean compared with some of the earlier work: it won’t provide resistance to anyone seeking the bingeworthy excitements that Whitehead is as good at as he is at everything else he does.