Home » Lifestyle » There's nothing so magical as a Christmas card

There's nothing so magical as a Christmas card

Even if they don’t arrive on time, there’s nothing so magical as a Christmas card: She’s had only two this year (sound familiar?), but DAISY GOODWIN says we musn’t let postal strikes kill off such a cherished tradition

Yesterday, I visited a friend’s house and was amazed to find it festooned with strings of Christmas cards.

I have had only two so far this year, thanks to the double whammy of a postal strike and the rising cost of everything from envelopes to stamps. MailOnline has asked if there is any point in sending cards this year?

‘You must have very rich friends, with their own flock of carrier pigeons,’ I said. She looked rather embarrassed. ‘Don’t tell anybody, but we saved our cards from last year. We’ve only had three and I don’t want people to think we have no friends.’

I’m rather jealous of her cunning. As strikes send an already vast backlog of mail soaring, some Christmas cards are now predicted to arrive in February. I think many won’t bother to send them at all. 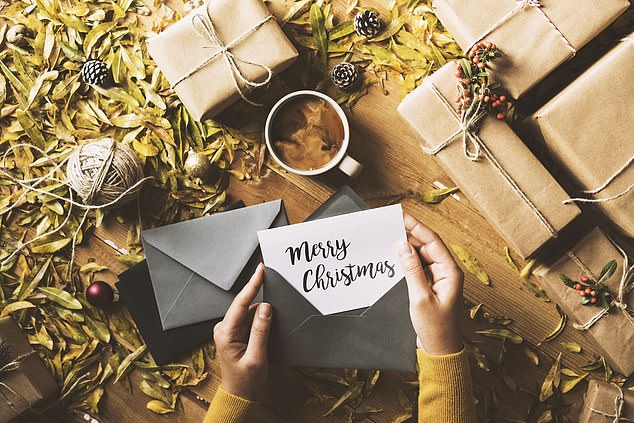 Daisy Goodwin explains what she loves about the joy of sending cards at Christmas. She recalls her great-aunt who sent them early before she passed away

I fear this could be the year Christmas cards — the proper ones made of card and paper rather than the dreaded e-cards made of pixels — go the way of festive milk bottle tops and real candles on Christmas trees, and become a fond memory.

Perhaps this is inevitable, the number of Christmas cards sent every year has been dwindling, but I can’t help feeling it will be a loss.

Sending and receiving cards creates the kind of social network that makes everybody feel good — an annual reminder that we care about each other. The choosing and writing of a card is a far more meaningful act than sending a festive text, and I will be heartbroken to see them go.

The thump of card on doormat in the first week of December has always been part of my pre-­Christmas soundtrack. There were the big glossy ones, usually from the U.S., that featured photographs of family members in matching Christmas jumpers or, in one memorable example, in matching skydiving suits mid-jump. The Royal Family like a photo card, too — the Prince and Princess of Wales have just released theirs.

It made me recall the famous one of Charles with the two boys hiding in urns, which must by now be a collector’s item. I admire the families that have the planning and child-wrangling skills to pull off the adorable mum, dad, kids and dogs in matching pyjamas effort . . . they should be running the country, or at least negotiating with the postal workers.

There is little that beats the magical eccentricity of the Great British Christmas card. Each year, one relative used to send a weighty envelope containing an epic poem about the past 12 months. He wasn’t exactly Tennyson, but somehow listing his family’s achievements in rhyming couplets made it much more entertaining than the regular round robin… 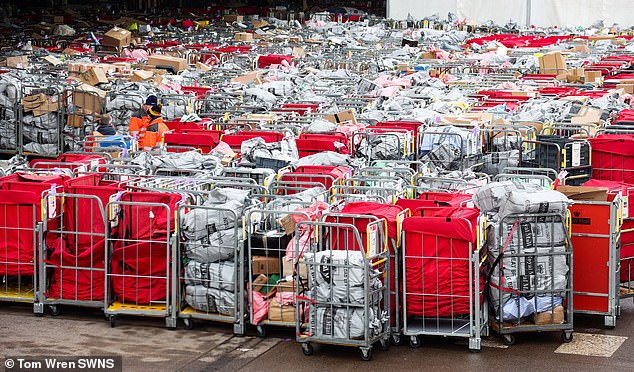 As strikes send an already vast backlog of mail soaring, some Christmas cards are now predicted to arrive in February

‘Our oldest boy has got a first, And mum and dad are fit to burst, Laurie got Grade 8 on the cello So we could not be more mellow.’

But, sadly, his poetic talents are no more, as he died last year. As a tribute, I tried to do my own poem, but struggled to get past the first line as nothing appropriate seems to rhyme with puppy, let alone cockapoo — the major event of this empty-nester’s year.

Growing up, I always found the annual poem a bit of a joke, but now I can appreciate the amount of work and thought that must have gone into each one. Yes, cards can be dashed off in haste, but they can also be packed with love and meaning.

When my great-aunt was told she had cancer, she went out and bought a stack of Christmas cards on sale (it was February) and spent a day writing and addressing them all ‘just in case I don’t feel like it later’.

On each card she wrote: ‘Dead or alive, I am wishing you a very merry Christmas.’

I got quite a shock when I saw her handwriting on the card, which arrived on December 13, precisely two months after her funeral. But opening it made me smile and remember her great sense of humour, and how much I miss her.

That is one card that will never go into the recycling bin. The first commercial Christmas card was the brainchild of Post Office worker Sir Henry Cole (later the first director of the Victoria & Albert Museum). It was billed as a ‘Christmas congratulation card or picture emblematical of Old English Festivity to Perpetuate kind recollections between Dear friends’. And it had a jolly picture of a family, including the children, raising a glass of something red.

The original cards cost one shilling (£10 in today’s money) so each card was an investment. Prince Albert, a friend of Cole’s, thought it was an excellent idea, and Queen Victoria was the first person to send an official Christmas card (although sadly it did not involve all nine royal children in matching onesies). By the 1870s, they had become a staple of the annual festivities (although robins and snowmen had replaced children quaffing booze).

Of course, the new tradition wasn’t without its hitches. I suspect that the passive aggressive side of Christmas cards must have started pretty much the moment they were invented. I do my best, but every year I feel terrible when someone sends me a card I haven’t reciprocated. Some years, I’ve felt so guilty that I have snuck out on Christmas Eve with cards for people who’ve unexpectedly sent me one. This year, thanks to the unions, I can safely wait until the New Year and claim they were stuck in the post.

I feel especially bad about the person who, every year, sends me a beautiful card from the National Gallery, with an illegible signature. I have spent hours trying to decipher the glamorous squiggle, but I have never figured out who the sender is. How I will miss those cards whenever my secret correspondent finally gives up on me as an ungrateful wretch.

Growing up in the 1970s with a mother who was the queen of all things craft, we children were taught that homemade cards were the best. I remember some happy winter days carving potatoes into Christmas tree shapes and stamping them onto sugar paper, and it was a useful lesson that festive cheer was something you could make rather than buy.

Now in their 20s, I suspect they will never get the ritual of Christmas cards, unless it becomes a retro fad — like beards and sourdough. But no amount of stripping Santas or online reindeer memes can replace the frisson of opening a real paper envelope.

Hitting send to everyone in your contact book does not convey the same care as writing addresses and sticking on stamps.

Plus, working your way through a list of your loved ones is a good way of working out how much you really want to stay in touch with them. It’s a moment of connection that makes Christmas into more than a licence to eat, drink and watch Love Actually.

That’s why my New Year’s Resolution for 2023 will be to write my Christmas cards in September and send them in the last week of November. At least then they’ll have a sporting chance of getting there for Christmas 2024.