This jazz pairing is a match-up made in heaven

The opening Creeper was so delicate that you listened with the same nervousness you would watch a child juggle a porcelain plate. Penned, like all Waveteller’s material, by bassist Michael Mear, Creeper exemplified the project’s fondness for exploiting space and dynamics. The often intricate interaction between Mear, keyboards player Casey Golden and drummer Ed Rodrigues made the music intense without making it dense, so they were like three dancers whose feet never touch the ground.

If Mear is the conceptualist, it’s Rodrigues’ flair for playing with sticks at whisper-volume that facilitates that conception’s realisation. He also brings an equal flair for melodic invention, so that Balarang, from the band’s eponymous debut album, had keyboard, bass and drums creating three intersecting lines of equal-value melody. 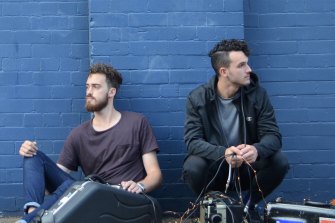 Where that first album was stacked with teasing rhythmic puzzles such as Up Top, two of Mear’s newer pieces were notable for a pastel-hued wistfulness. Dark Days even carried vague echoes of Miles Davis’s timeless Sketches of Spain, while the evocative And the Rain Comes had the drums chattering and splattering like a shower on a tin roof, and, as always, Golden was telling us exquisitely crafted stories rather than idly soloing.

The Avgenicos Brothers – trumpeter Tom and tenor saxophonist Michael – are now fully woven into the Sydney jazz scene’s rich fabric, and have their own project. Initially a sextet, here the band performed as a quartet without bass or guitar, the brothers joined by the spinning vibrancy of keyboards player Novak Manojlovic and drummer Alex Hirlian.

Just as Mear was a less compelling soloist than Golden or Rodrigues, but created the contexts in which the other two shone, so Tom and Michael, who are routinely gripping improvisers in other bands, were less striking playing their own compositions than Manojlovic and Hirlian. Michael’s Schyea sizzled like spit on a barbecue, and elsewhere the band slid between big-sky soundscapes or wickedly funky grooves, often with Manojlovic providing keyboard bass to partner Hirlian’s drumming, the whip-crack snare of which would have snapped Creeper in two.

TV, movies, Find out the next TV, streaming series and movies to add to your must-sees. Get The Watchlist delivered every Thursday.