Home » Lifestyle » Time for the Addams Family to finally go to their eternal rest?

Time for the Addams Family to finally go to their eternal rest?

A decade ago, it looked as if Charles Addams’ family of urbane and friendly ghouls had found a comfortably appointed graveyard and gone to their eternal rest.

Then Hollywood and its voracious need to feed our screens led to their disinterment, and they were dusted off for yet another re-boot. 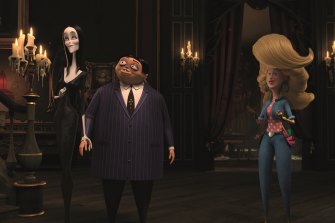 The result was an animated feature designed to introduce them to a new generation. Uninspired but profitable, it prompted a follow-up, so the Addams are back again in a convoluted plot pitching them into the world of stem cell research.

It involves a family road trip and a villainous bio-tech tycoon out to take their daughter, Wednesday, from them. Worse, Wednesday (voiced by Chloe Grace Moretz), a notorious intellectual snob who sees herself as being superior to the rest of the household, accepts his unfounded claim that he’s her real father, and willingly goes with him.

Otherwise, little has changed with the Addams. Gomez (Oscar Isaac) is still besotted with his wife, the queenly Morticia (Charlize Theron), their tubby son, Pugsley (Javon Walton), is still being bullied by his sister. Lurch (Conrad Vernon), the family retainer, is as faithful as ever while Grandma (Bette Midler) remains her feckless self.

Apart from Wednesday, the only one to change is Uncle Fester (Nick Kroll), who has unwittingly become part of Wednesday’s latest science experiment. In an attempt to improve him, she’s injected him with the DNA of Socrates, her pet squid.

All up, these eccentricities may make the Addams’ latest adventure sound more entertaining than it is. The film proceeds from a very slow start as the family unwisely leaves Grandma to look after the house before setting off in their luxury camper hearse to retrieve Wednesday from her abductor, Cyrus Strange (Bill Hader). It’s not until they hook up with a gang of music-loving bikies who take to the dance floor at a roadside diner to join Lurch in a spirited rendition of Gloria Gaynor’s I Will Survive that things really get going.

If you’ve long been an Addams Family fan or even a familiar – and that probably includes anyone with a TV set – you may find the events that follow more fun than the 2019 movie as a little more energy and imagination has gone into the plot.

But nothing can change the fact that it’s yet another example of Hollywood cannibalising its own in its eagerness to keep up the flow of franchises on which the studios rely these days for their sustenance. It’s all about name recognition. If the audience has heard of it, it’s deemed to be worth another re-make, no matter how decrepit it’s become.