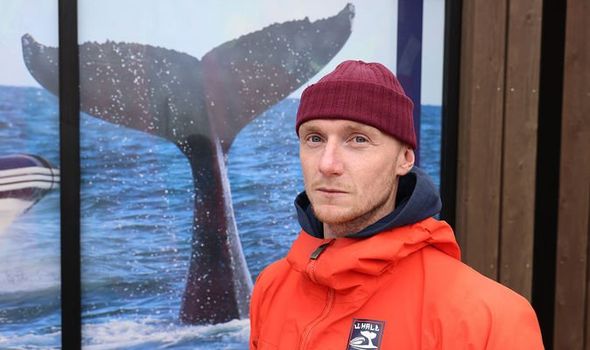 Despite the international ban on whaling, The Three Frakkar offers starters of roast whale or raw whale sashimi style, both for about £12. Whale steak with pepper sauce, right, is available as a main course for £26.70.

Conservationists claim that whaling is being kept alive by tourists Mr Ulfarsson, 52, said: “In the early days whale meat was a poor man’s food but we have tried to make it more of a delicacy.”

He said of his eaterie’s clientele: “At the moment it is mainly American tourists but in normal times we get a lot of Brits.”

Reflecting on his experience of watching a whale being killed, he said: “The way I see it is that it is a 98 percent certain kill because the harpoon has dynamite on the end.”

Iceland, which resumed commercial whaling in 2006, uses legal loopholes to continue the practice.

The last remaining fin whaling firm, Hvalur, has a quota for about 170 fin whales a year.

Asked whether he thought hunting whales was justified, Hvalur’s owner, Kristjan Loftsson, 78, said: “People hunt Bambi in the UK. Do you think that is cruel?”

Surveys by the International Fund for Animal Welfare consistently show that just two percent of Icelanders regularly eat whale meat. But whale-watching remains big business in Iceland as about 368,000 enjoyed the spectacle of the majestic mammals in 2017.

British whale-watching guide Mike Smith, 29, from Rainham in Essex, said: “Many tourists don’t seem to see the connection between whales and whaling.

“But whaling is barbaric.Whalers use explosive harpoons. They put a very intelligent, sentient animal through a long period of pain.

“The best way to stop this is for tourists not to eat whale meat.”

Loopholes that allow the killing

Save The Whale was one of the first green campaign triumphs.

With many species hunted close to extinction, activists ushered in a global ban through the International Whaling Commission in 1986.

But legal loopholes have allowed Japan, Norway and Iceland to carry on.

Iceland did not object but quit the IWC in 1992. It rejoined in 2002 and lodged a “reservation” against the outlawing.

In 2006 it gave itself a commercial quota for fin and minke types. Since then over 1,500 whales have been killed.

But less demand for whale meat and problems with exporting to Japan have hit whalers.

No boats have gone out since the 2018 season. But yesterday the owner of the sole remaining fin whaling vessels, Kristjan Loftsson, told the Daily Express the only thing stopping him was the pandemic.

We have worked in Iceland since before the country resumed whaling in 2006 after a 14-year break.

Iceland’s decision to train its harpoons on whales again was a shock to many visitors who were discovering Iceland as one of the new eco-destinations with unspoilt landscapes and fascinating wildlife.

It was also confusing to those who thought commercial whaling was banned in the 1980s. Like Norway and Japan, Iceland exploited a loophole.

IFAW opposes commercial whaling because it is inherently cruel ‑ there is no humane way to kill a whale and they have been shown to take from several minutes to over half an hour to die.

Ultimately, the decision to end whaling in Iceland would be made by Icelanders themselves.

While there is still concern that whaling magnate Kristjan Loftsson could decide to go fin whaling again to ensure a renewed quota beyond 2023, minke whaling has ended for good and Icelandic whale watching continues to thrive.

Sharon Livermore works for the International Fund for Animal Welfare