‘Triangle families’ on the rise, but only-child stereotypes persist

As the mother of an only child, Simone Santiago is used to concern and advice from friends and strangers about her decision.

Santiago, 37, and her husband Peter, 38, from Balmain East in inner-Sydney are parents to Adrielle, 3, and feel their family is complete. 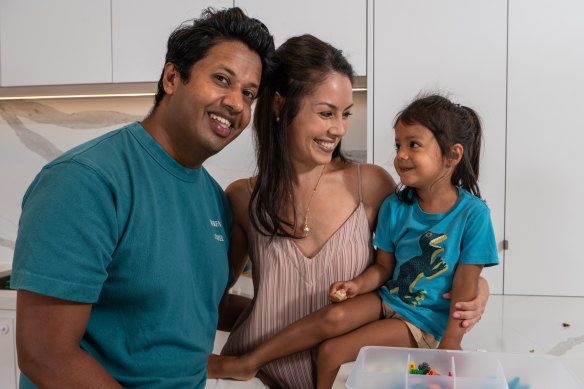 Peter and Simone Santiago with their daughter Adrielle make a complete family.Credit:Flavio Brancaleone

“People will say ‘you better make sure that she’s socialised or she’s going to be very spoiled’ or they say ‘it’s sad that she will be lonely and won’t have anyone else,” Santiago says. “It’s a little bit disconcerting sometimes.”

While some only children live with step-siblings or half-siblings, census data also shows one-child households are increasingly common. Among all households with children under the age of 15, the proportion with just one child rose slightly over the past decade, from 29.1 per cent in 2011 to 30.1 per cent in 2021. (This would include children with siblings older than 15).

Often called “triangle families”, parents of only children often bond together in online communities and in real life. Yet there is still a stigma, with many parents reporting negative comments and questions from friends and strangers about their decision to stop after one baby. 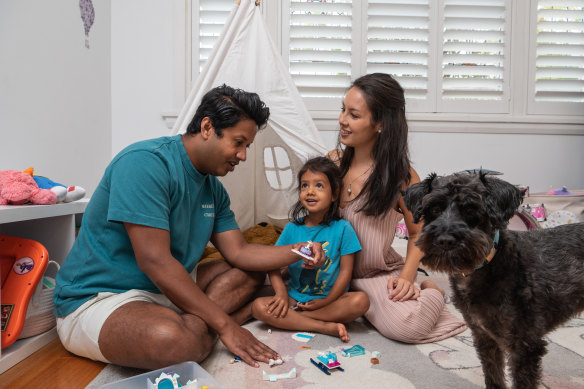 Peter and Simone Santiago, with daughter Adrielle, say they have faced questions about their choice to have one child.Credit:Flavio Brancaleone

Lotte St Clair, 45, from Fitzroy in inner Melbourne, the mother of a 10-year-old boy, had a stranger in a playground tell her “one child is akin to child abuse and really unfair on the child”. She and her partner considered having a second child but decided against it because of work commitments, finances and environmental concerns.

Christine Longworth, 54, from Winston Hills in north-west Sydney conceived her 16-year-old son through IVF and was unable to have another because of serial miscarriages.

She felt the stigma when she and her son were younger and people would ask about siblings.

“Sometimes I felt the need to say ‘not by choice’, and other times I would leave it,” Longworth said. “It was how they kind of reacted to it, whether it was just in the tone of their voice or their body language.”

Australian Institute of Family Studies senior research fellow Dr Lixia Qu said contributing factors to the trend was that women were postponing childbearing until later and partnering with someone who already had children.

“It’s consistent with the general trends in fertility,” Qu said. “We know the average family size has been declining for a long time and the fertility rate has fallen below replacement level.”

Qu, commenting on published studies rather than her own research, said there was no conclusive evidence that only children differed from other children in personality including sociability.

In fact, some research on only children found positive outcomes. For example, they achieved slightly better in education and tended to have higher levels of education and have more prestigious occupations.

Qu said in the early 20th century only children were portrayed as “selfish”, “lonely” and “maladjusted”, but mental health professionals no longer believed this.

The first president of the American Psychological Association, who oversaw an influential study of only children in 1896, said that “to be an only child is a disease in itself”.

In 1922, the psychologist A.A. Brill wrote: “It would naturally be best for the individual and the [human] race if there were no only children”.

Qu said negative stereotypes about only children persisted and there was a strong cultural belief that having two children was the ideal family size.

Two out of five women in their 40s reported having two children in the 2021 census, the biggest by far. In 1981, three children was the most popular family size.