Mother, 50, who felt ‘hideous’ and divorcée, 54, who became a ‘shell’ during her unhappy marriage are overwhelmed by their transformations on 10 Years Younger In 10 Days

A 50-year-old woman who looked a decade older than her real age broke down in tears last night after a stunning makeover on 10 Years Younger in 10 Days.

Suzanne, 50, a mother-of-two and community police officer from Woodley, Berkshire, told the show she felt ‘hideous’ and saw herself as a ‘fat, ugly person’ despite losing 7st.

She took part in the show alongside Tracey, a divorced supermarket worker and mother-of-five from Exeter, who had also lost confidence despite losing 6st.

Suzanne wanted to be more confident for her 15-year-old daughter Fay, while Tracey said she had never put herself first and wanted to rebuild her confidence.

At the start of the show, an experiment found that both were thought to be much older than their actual ages by a panel of strangers, with Suzanne being given an average age of 59 by passers-by, and Tracey an average of 60.

Thanks to the expertise of 10 Years Younger’s stylist, hair, make-up and dentistry specialists, they both emerged ooking much younger and happier. 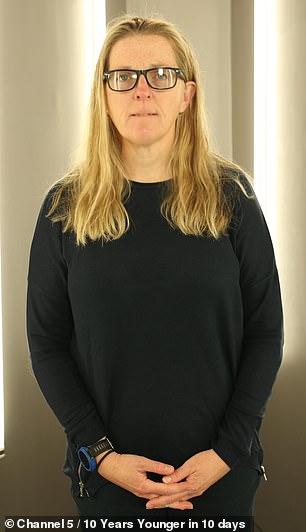 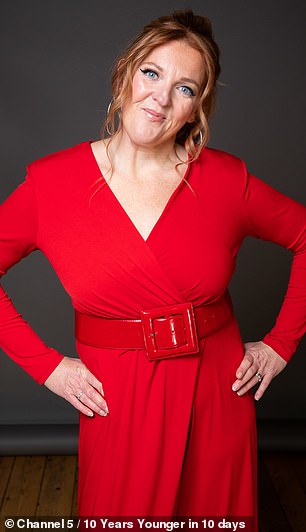 Hairstylist John Vial coloured Suzanne’s hair red to give her a fun look, which stylish Gemma Sheppard complimented with a red jumpsuit 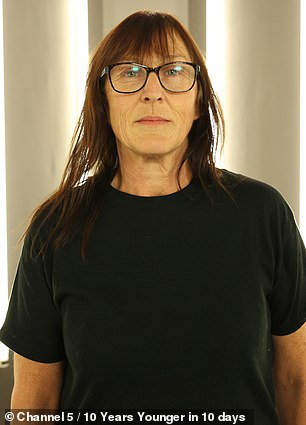 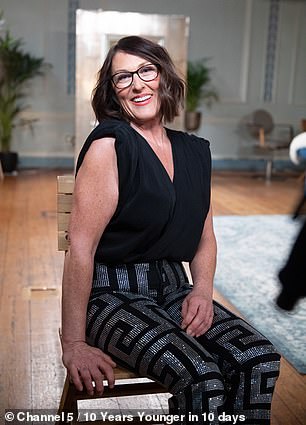 10 Years Younger in 10 Days came back on Channel 5 tonight. Supermarket worker and mother-of-five from Exeter Tracey, 54, said she was a ‘shell’ during her unhappy marriage and had never put herself first, focusing all her energy on her children (pictured before)

In the show, Suzanne, a mother-of-two, admitted she hated the way she looked and found herself ‘hideous.’

In spite of feeling confident and ‘ready to take on the world’ when she has her police uniform on, it was another story when Suzanne was at home.

‘I would describe myself as very sad. I don’t have a very good outlook on myself, especially my body and the way I look. I see a fat ugly person, I hate it,’ she said.

‘I hide behind the big bad clothes, even though I’ve lost 7 stone in weight through running,’ she added. 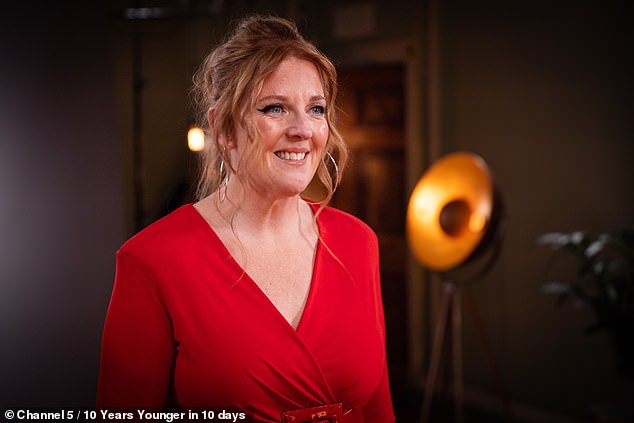 Suzanne was reduced to tears by her new appearance, looking cool and feminine in a red jumpsuit (pictured after)

She said she felt the way she presented herself had a negative impact on her daughter Fay, 15, and that she needed to be more positive.

Speaking to the camera, Fay said: ‘ I’d love to see my mum be the old person she was. She’s been through a lot. She thinks she’s huge but she’s not, she’s got an incredible figure she should show off

Suzanne admitted her confidence issues, and an early onset of menopause aged 43 had deeply impacted her marital life with husband Scott as well.

‘We’ve lost our way as a couple and a lot of that is due to my confidence and how I feel about myself,’ she said.

‘Having a daughter that’s 15, now it’s time to change, I want to feel confidence and happy in my skin,’ she added.

A public poll of Suzanne’s estimated age found people placed her at 59, nine years older than she actually was.

’50 is an age for me I should think more for myself, my children are getting a bit older now,’ she told presenter Cherry Healey.

‘For me, I lost my confidence. Which is really weird because most people that lose wight, you should think they gain confidence,’ she said. 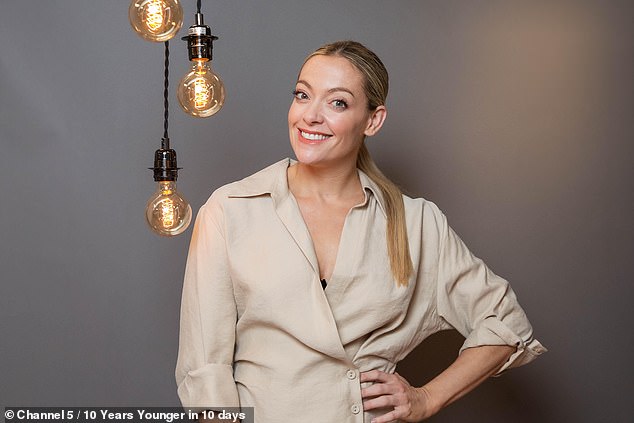 ‘My daughter Fay is 15, she’s in the years where things matter and I’m not giving her a positive vibe to carry on and keep through life,’ she admitted.

‘Finding the real Sue has been a longtime coming,’ she added, through tears, ‘and it needs to come now for my daughter’s sake, in fact, for my family’s sake.

‘Self loathing right now is just beyond belief, I hate it.’

Throughout the episode, Suzanne met with Dr Tapan Patel, a cosmetic surgeon who applied a fibre laser treatment underneath her skin to tighten it up.

The treatment cost £1,500, but last for three years, when dermo fillers only last 18 months.

He also injected some Botox in Suzanne’s forehead to get rid of her frowning lines.

When she saw the results, Suzanne was left speechless, as the change drew her to tears.

‘I feel that I’m beginning to love myself again,’ she said. 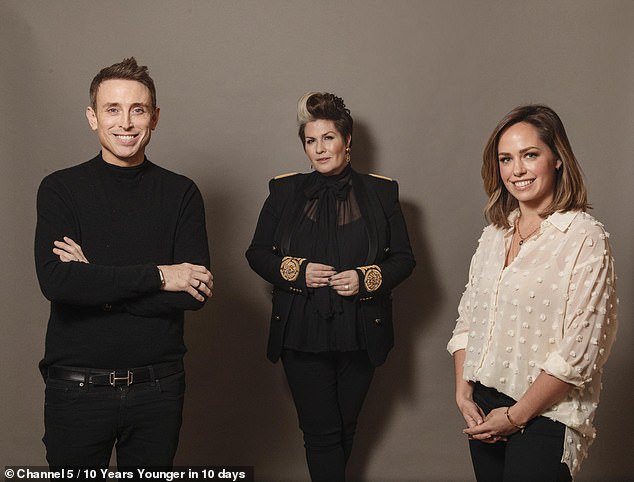 Suzanne also consulted an expert to discuss her early onset menopause, which had affected her sex drive and marriage.

Her dosage was adapted to her more carefully in order to regulate a hormonal imbalance she suffered as a result.

She was hopeful the change would help put her and Scott on the right track for the future.

After this appointment, she met with stylist Gemma Sheppard in hopes to take her wardrobe from baggy to snazzy.

Meeting with Gemma, Suzanne candidly admitted she hated the way she looked. To curb her negative thought process, Gemma encouraged her to come up with positive affirmation to be kinder to her appearance and herself.

Suzanne tried on several outfit putting the focus on her legs and bust, showing off her natural curves.

After her session with Gemma, Suzanne felt empowered enough to say ‘I love myself’ as she looked in the mirror, something she hadn’t been able to say in years.

At the time of the big reveal, the mother-of-two was moved to tears by her new look.

Dressed in a modern red jumpsuit, with a wavy punchy red head pony tail, the police officer said she could barely recognise herself.

At the end of the 10 day period, it was time for a freshly madeover Suzanne to face the music again, as passers-by gave her a new estimated age. 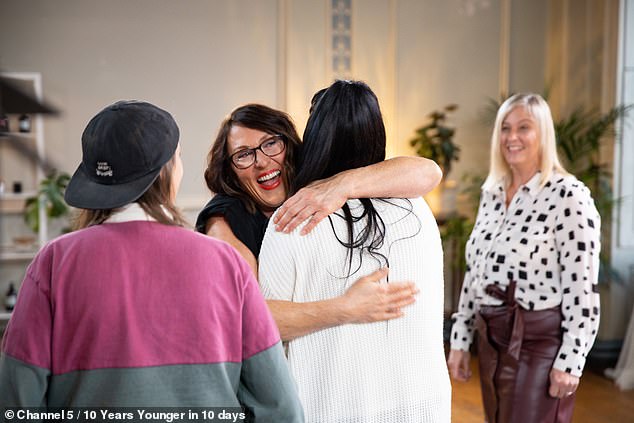 Tracey’s daughters and sister Serena, pictured, were impressed with her amazing younthful makeover

The experience was positive for Suzanne, who said she felt ‘like a million dollars.’

‘I feel like a new woman, One that is happy and confident,’ she said.

Her daugther Fay was moved to tears by her mother’s updated appearance and said ‘you keep it up, now and you show it off.’

Meanwhile in Exeter, we heard how Tracey had lost her confidence following a divorce from her husband of 20 years.

She explained she was not happy during the last five years of her marriage and stopped caring about the way she looked. 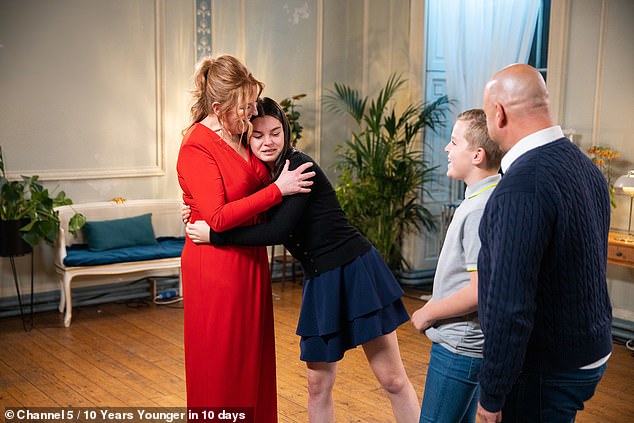 Suzanne’s daughter Fay, 15, was moved to tears by her mother’s makeover. Suzanne explained during the episode she wanted to put out a more positive attitude to serve as an example for her children 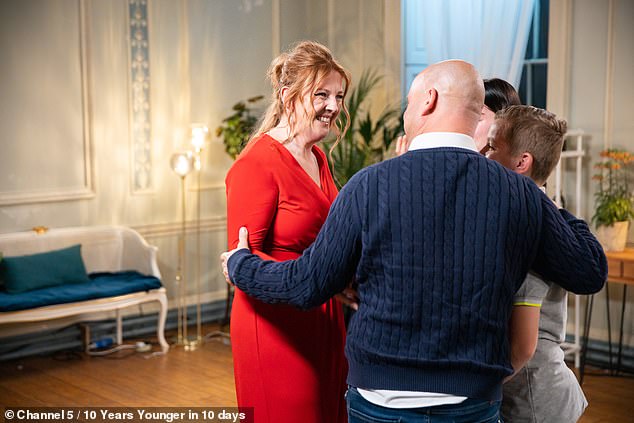 Suzanne explained in the show her early onset menopause had affected her marriage, but after her makeover, Scott , pictured, looked more in love with her than ever 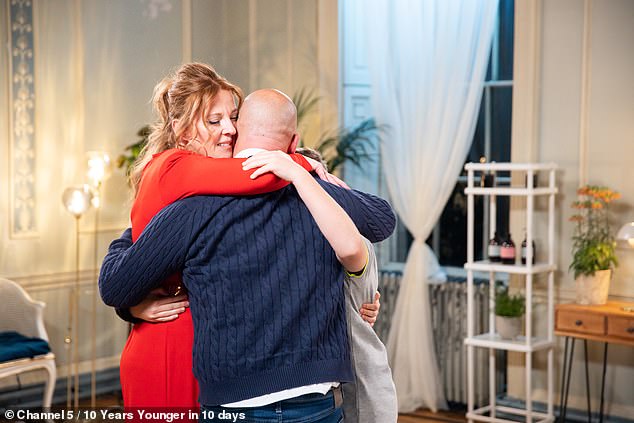 The family embraced after the makeover, with Suzanne saying she loved herself and felt as confident as ever

Tracey admitted she drank regularly and smoked 20 cigarettes a day, which she believed had severely damaged her teeth and skin.

In spite of losing 6st in three years following her decision to leave her husband, Tracey was not happy with herself.

Her daughter Sophie said: ‘Mum’s confidence has definitely dropped. We would do what we can to change that but as much as you tell her, it doesn’t change the way she feels.’

Tracey’s sister Serena agreed she had ‘lost the spark.’

‘Nobody understands how I do feel,’ Tracey told Serena through tears, before the experiment started. 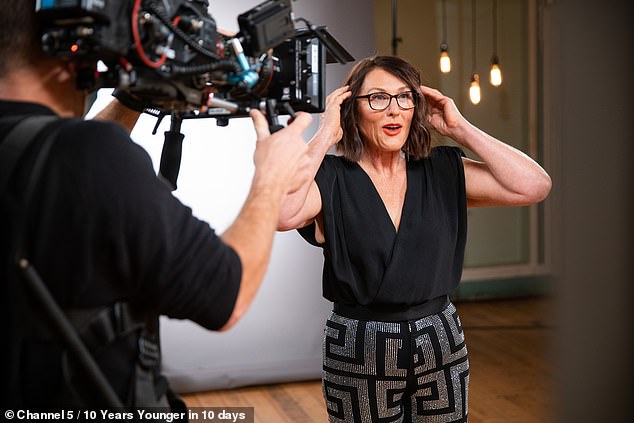 Suzanne, pictured after the makeover, couldn’t believe how different she looked, and said she loved her new haircut (pictured) 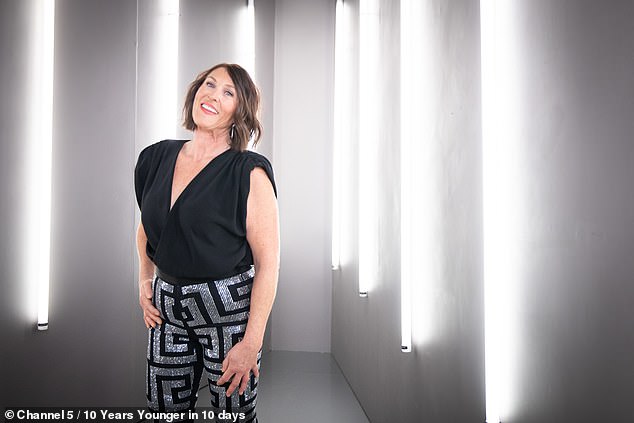 Tracey cheekily joked that she was ready to dip her toes into the dating pool after her makeover, pictured

At the beginning of the show, Tracey had to stand through a public poll in order to estimate the average age people gave her.

Strangers said she was around 60, six years older than how old she actually was.

‘I’ve been a mum of five, I got a big family. My children always first,I’ve never put myself first,’ she told presenter Cherry Healey.

Throughout the episode, Tracey went through several expert appointments to boost her confidence.

Tracey had grown self-conscious about her teeth. She felt years of smoking and tea drinking were responsible for decolouration and stains.

However, Dr Uchenna explained the staining was most likely due to an antibiotic Tracey was administered when she was a child.

She fitted the mother-of-five’s upper set of teeth with dentures, and whitened her bottom set with laser, which can cost £400 per session.

The procedure was a mood booster for Tracey, who couldn’t stop smiling after her new smile was revealed.

After this first appointment, Tracey met with Gemma in order to work out a new, more feminine style.

At the end of the show, Tracey, who admitted she was a ‘shell’ during her unhappy marriage, was ready to see how she looked after the makeover.

Hair stylist John Vial cut her long locks and gave her a stylish wavy bob with hony highlights. She looked cool and relaxed in sequined trousers and a blouse.

After the transformation, Suzanne, who had been single since her divorce, said she was ready to date again.

‘It’s about time I stated putting in my toes in the water and finding those little fishes. There’s plenty of them out there, so I need to find them,’ she said.

Viewers loved the makeovers, and some noted how supportive Fay was of Suzanne.

‘The daughter – Fay – on #10yearsyounger tonight what a beautiful kid. Such pure love and pride for her mum.

‘Loving the focus on #menopause on #10yearsyounger. Woohoo,’ said another.

‘Love that her daughter asked her how she felt,’ another applauded.

‘#10yearsyounger this show fills me with absolute warmth! The look on there faces after the reveal is just the best feeling in the world,’ one said.

‘I’m in tears watching #10yearsyounger. Seeing those 2 amazing ladies explode with confidence is soo up lifting. Well done Cherry and @channel5_tv just what we needed,’ one wrote.