University Challenge viewers brand last night’s episode the ‘most frustrating ever’ after teams agonise over answers and resort to guesswork – but could YOU do any better?

University Challenge viewers were left frustrated by the amount of ‘guesswork’ on last night’s episode and said it was the most ‘excruciating’ match they had ever watched.

Queen Mary, University of London took on Oxford Brookes in a slow-scoring first round match that ended with Queen Mary eventually winning 115-90.

Both teams took a while to get off the ground, with the scoreboard at the halfway point reading just 55-15. Of the first five Starter for Ten questions, just two were answered correctly.

Scroll down for questions and answers 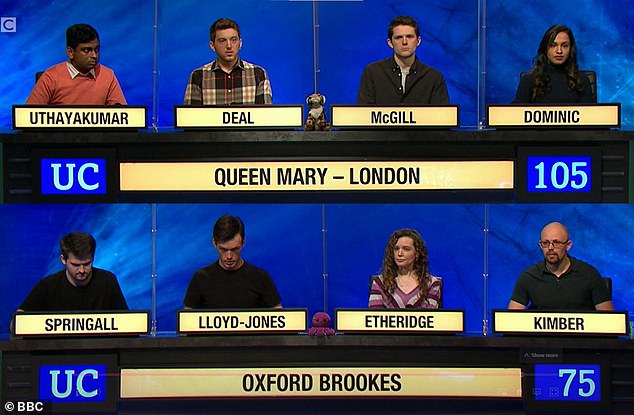 How many Starter for Ten questions can YOU answer?

Each of these questions are worth 10 points and must be answered by a single player without any consultation. The team who wins a Starter For Ten is then given three bonus questions, each worth five points.

1. Born in the mid-19th century, which thinker rendered the agents in a well-known theoretical construct by the German terms Ich, Es and Über-Ich, in English they are known by the Latin terms ego, id and super ego

3. Miguel Ángel López and Aleksandr Vlasov, were among riders on the 2020 roster of which cycle racing team with sky blue and yellow colours. Its name was that of the Asian capital that was renamed Nur-Sultan in 2019.

4. ‘Fight for the things that you care about but do it in a way that will lead others to join you.’ These are the words of which leading figure in the United States judiciary who died in 2020?

5. For your picture starter you are going to see the diagram of an embroidery stitch. Ten points if you can name the stitch. 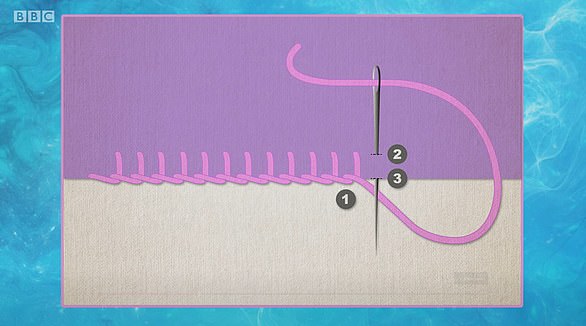 6. The occupation by a group of mercenaries called the Mamertini of the city of Messana in the 3rd century BC provoked the first in which series of wars which continued intermittently for the next 100 years.

7. What verse form is defined as consisting of an uneven number of three-line stanzas, rhyming ABA, and a final quatrain rhyming ABAA, with only two lines throughout. It shares its name with the assassin played by Jodie Comer in the drama series Killing Eve?

8. A little larger than Cornwall and likened to Noah’s ark on account of its unique biodiversity, which island off the coast of South Australia became a focus of wildlife rescue during the 2020 bush fires. It is named after a macropod mammal.

9. In the 10th century, the Persian astronomer Al-Sufi identified which spiral galaxy now designated M31 and named after the constellation in which it appears.

10. Which SI derived unit is equivalent to one lumen per square metre its symbol may be read as the Roman numerals that represent 60.

12. Give the name of the island that has a capital named after Grand Master Jean Parisot who commanded the island’s defence against the great siege… (question interrupted to answer).

13. For your picture starter you are going to see a publicity still from a television comedy series. For 10 points give the series title. 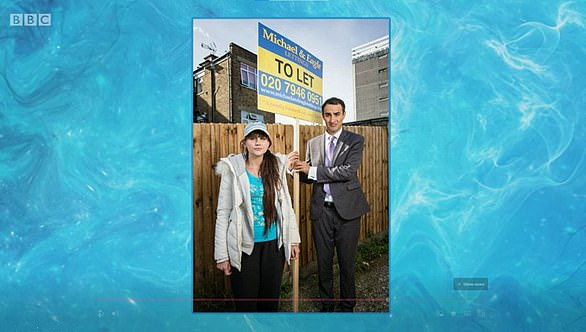 14. In geometry, how many faces has the polyhedron named the hexecontahedron?

15. Born in 1685, which philosopher is associated with a Latin expression meaning ‘to be is to be perceived (or to perceive)’. His works include Three Dialogues between Hylas and Philonous.

16. The Pony Track is the main route of ascent of which peak to the east of Loch Linnhe.

17. The scientific study of what astronomical body is called areology

18. Of the Kings of England with the regnal name Henry, which one had the longest reign?

Fans playing along at home were left frustrated by the performance, with one tweeting: ‘Well that was the most excruciating episode of University Challenge.’

Another posted: ‘Have to say this is the single most painful episode of #UniversityChallenge I’ve ever watched. Want to claw my eyes out!’

A third added: ‘I’m not saying these teams are sub-par, but it might have been more impressive to watch the tiger mascot take on the octopus mascot. #UniversityChallenge.’

The Queen Mary team was captained by Alex McGill, who is studying for a PhD in Mathematics, and featured Medicine students Cathy Dominic and Marcus Deal, and Ab Uthayakumar, who is studying Economics. 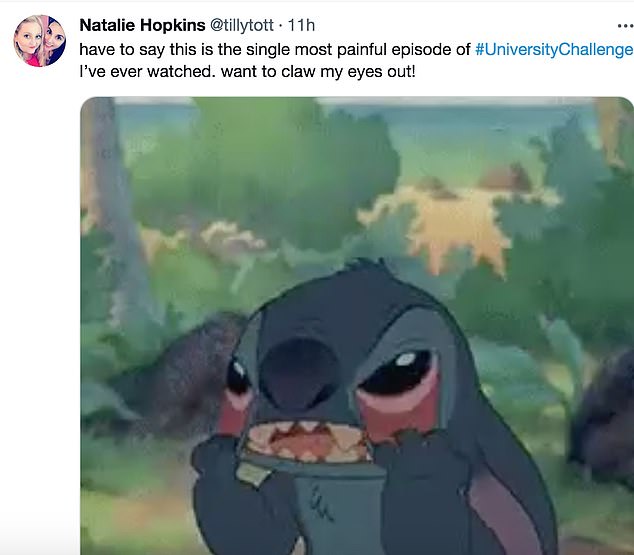 On the opposing side was Jacob Springall, studying Language and Education, Tom Lloyd-Jones, studying for a graduate diploma in Law, and Rich Kimber, studying for a postgraduate certificate in Conservation Ecology. Their captain was Kirsten Etheridge, who is studying for a PhD in popular music.

Both teams struggled with the Starter for Ten questions, with the first picture starter on embroidery and the music round on classical music proving problematic.

Oxford Brookes gambled and answered questions before host Jeremy Paxman had finished reading them, causing the team to lose marks. 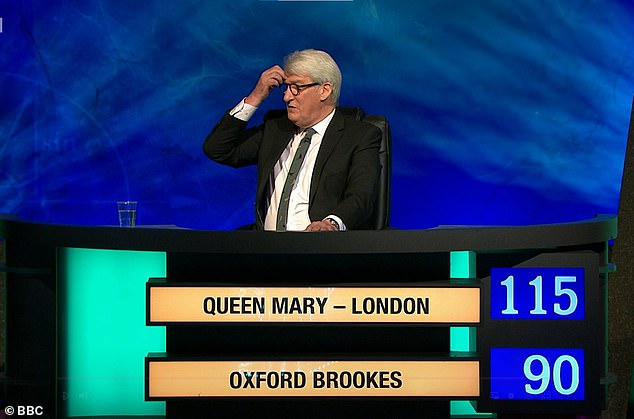 The teams eventually hit their stride, with Oxford Brookes putting in an impressive performance on the TV writing round. However it was not enough to beat Queen Mary, who answered the final question of the episode in the last second. Pictured, the final scores

The teams eventually hit their stride, with Oxford Brookes putting in an impressive performance on the TV writing round.

However it was not enough to beat Queen Mary, who answered the final question of the episode in the last second.

Queen Mary will progress to the next round of the competition while Oxford Brooks is knocked out.