Vaccine push to pave the way for country to reopen

National cabinet will start creating the path out of lockdowns on Friday when the country’s leaders look at how many Australians must be vaccinated against COVID-19 in order to end economically damaging restrictions.

But as the Berejiklian government pinned its hopes on a continued shift in the community’s attitude towards AstraZeneca, data seen by the Herald reveals the number of Pfizer doses administered this week was outstripping the locally made vaccine by more than 5000 per day. 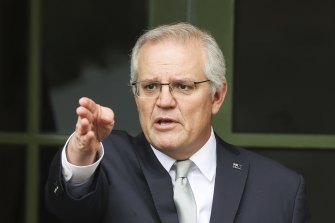 While the uptake of AstraZeneca has increased since the Sydney outbreak, especially among under 40s, the rate of vaccination would not see the majority of the state’s population inoculated against COVID-19 until the end of the year.

Premier Gladys Berejiklian has previously cited a figure of 75 to 80 per cent of the population needing to be vaccinated before the virus was allowed to circulate in the community.

Prime Minister Scott Morrison revealed late on Wednesday that the federal government had been sent The Peter Doherty Institute for Infection and Immunity’s modelling on the vaccination levels required to end the need for lockdowns and work was under way to combine that with Treasury predictions ahead of Friday’s meeting.

“I hope we’ll be able to set those targets and give more definition to phase two and phase three in that time. But, we have a plan for that.

“We are setting the targets scientifically, combined with the economic advice as well, and that gets us a roadmap to Christmas, I think, that means that we’ll be living life different at Christmas than what we are now.”

At the start of July, Mr Morrison revealed a four-phase plan to return Australia to a form of COVID-normal, with open borders and few restrictions. This masthead has reported the Doherty Institute’s modelling will have different vaccination thresholds for older and younger Australians.

Friday’s meeting will be the first time state and territory leaders will have detailed targets on how many of their citizens must get vaccinated in order to end border closures and business shutdowns.

Ms Berejiklian on Wednesday stressed a spike in vaccination rates, along with a tightened lockdown, were critical to Sydney emerging from lockdown on August 28, after the city recorded 177 new cases, its highest number this outbreak. The state also registered another death, taking the number of people who have died in this outbreak to 11.

“It was fairly obvious, given the way the numbers were going in the last few days, it would have not been possible for us to get out of lockdown tomorrow or Friday,” she said.

Ms Berejiklian said she personally appreciated the toll the next four weeks would take on the community, but it was necessary in order to keep people safe and hospital numbers down.

“Please know that I’m as upset and as frustrated as all of you that we weren’t able to get the case numbers where we’d like to, at this point in time. That’s the reality. We have to deal with the cards that are here before us.”

Health Minister Brad Hazzard said the recent vaccination figures showed the community was increasing its understanding of the need for vaccinations. However, the state was still “a long way short” of where it needed to be.

“Contrary to what some have said, vaccines are definitely a major player in our way out of lockdowns. NSW residents have certainly responded to the breakout by getting more jabs in arms of AstraZeneca and, when it’s available, Pfizer,” he said. 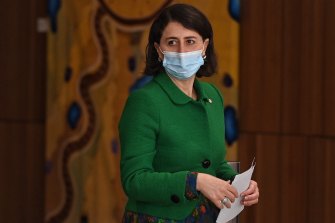 “The increase in the willingness to be vaccinated brings hope for the future, but right now the focus has to be staying home and not spreading the virus.”

Mr Morrison on Wednesday announced income support for people in lockdown would return to the level of the original JobKeeper scheme and those on welfare who have lost work hours will get a $200 weekly supplement under further changes to the pandemic disaster payments.

The arrangements will automatically kick in for the more than 463,000 people in NSW already receiving disaster payments. Those who have lost 20 hours or more of work in a week will receive $750, up from $600 a week, and people who have lost fewer hours will now get $450.

The Premier on Wednesday revealed new restrictions for Greater Sydney for the four-week lockdown extension.

Under the new rules people in the Parramatta, Campbelltown and Georges River local government areas are under the same orders as those in Fairfield, Liverpool, Canterbury-Bankstown, Blacktown and Cumberland, with only authorised workers permitted to leave home for work.

Ms Berejiklian said imposing harsher restrictions in the most populated parts of Greater Sydney was a “big call,” but one that could not be avoided, given the growth of the virus in localised areas.

Year 12 students will be allowed to return to classrooms from August 16, with rapid antigen testing introduced to control the risk of future outbreaks. In COVID-affected south-west and western Sydney year 12 students will also be given priority Pfizer vaccinations with Pfizer doses to be repurposed from NSW Health’s rural and regional supply.

Other changes include new essential shopping rules restricting people to a 10-kilometre radius from their home, while a singles bubble will take effect from Saturday allowing people who live alone to nominate one designated family member or friend to visit their household.

“That is a big call on our part, but it’s an important tool. And don’t underestimate how harsh that is,” she said.

“That localised targeted response is what we hope will have the desired effect, having fewer people mobile from those communities where we know the virus is circulating.“

In the past week, the eight local government areas have recorded 879 cases of COVID-19, with more than two-thirds recorded in Fairfield, Canterbury-Bankstown and Cumberland.