Steve Lynch looks harried. TISM LPs have been flying out of his enormous mechanical baby – Australia’s first new vinyl pressing plant in three decades – but there’s a problem with a vacuum sensor. It is not sensing the vacuum.

Lynch scurries about for 20 minutes, creases his forehead a few times, and… then the automated WarmTone press is back up and humming, spitting out two discs a minute for an increasingly vinyl-hungry world. 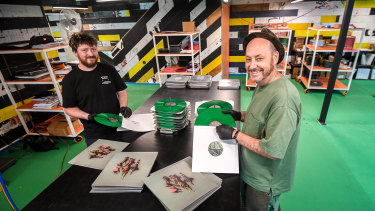 Steve Lynch and Dave Roper and at Program Records.Credit:Justin McManus

The pressing plant, Program Records, has been running under the radar for a couple of months now in a brown-bricked, green-floored warehouse in Thornbury, intriguing the neighbours.

It came about after Lynch and his business partner Dave Roper noticed that local acts, including buzz bands such as Boomgates, kept running out of vinyl that took months to replace from overseas.

So they spent $400,000 of their savings on a crazy plan that just might work: reviving one of the oldest technologies in the recording industry, using the latest technology.

With the needle only just hitting the groove Lynch and Roper already have a burgeoning business, with orders from Mark Seymour, Kim Salmon, Sleaford Mods and more. And they have big plans: their warehouse will soon house not just the pressing plant but a concert venue, too. 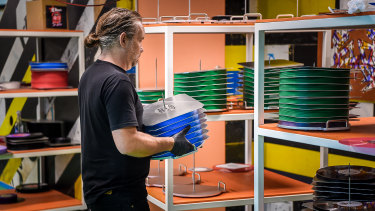 “[Our architect] helped us allow for a community space where bands can be playing their album live to a crowd during a pressing party,” says Lynch. Adds Roper: “They’ll be playing while their records are literally coming hot off the press.”

The global vinyl revival has eclipsed compact disc sales for the first time since the 1980s. Recording Industry Association of America data shows vinyl album revenues of $US232 million ($300 million) in 2020 made up 62 per cent of total physical revenues [in the US].

In 2019, the Australian Recording Industry Association responded to the revival with its first-ever vinyl albums chart. “There is a major sense of nostalgia to the experience of vinyl. The format is tangible and collectable, often with original and numbered artworks,” former ARIA CEO Dan Rosen said at the time.

The pandemic has helped push the trend along: fans deprived of concerts have opened their wallets and voted for black wax. But it’s been a long time coming.

Around a decade ago Lynch was working at the indie music store Title on Gertrude Street in Fitzroy. Roper, a courier-cum-entrepreneur who founded the Crumpler bag empire in 1995 (ker-ching!), would come in regularly. The pair would have a chat and a beer, and Roper would buy a heap of vinyl.

Lynch shared a problem they had: they’d regularly sell out of the vinyl for local acts and couldn’t fill orders for six to nine months, until overseas factories got around to the next pressing.

It’s still happening: The Avalanches waited seven months for their new record We Will Always Love You to arrive from the Czech Republic.

“I was complaining to Dave, he said ‘how do you fix that problem?’” says Lynch. “I said we need an option so we can press albums for locals, quickly.”

They barely knew where to start – but got cracking anyway. The duo contacted global pressing plants asking for inside info, or equipment. They sent emails, even hand-written letters.

“We almost gave up,” says Roper. Whenever they thought they’d found a vinyl press, someone else snapped it up.

But eventually – to cut a long story involving trips to Germany and Toronto short – they found a cool bunch of Canadians with the tech they needed. They placed an order for a pair of presses, a snip at just $200,000 each. Roper blew all his Crumpler savings. Lynch hit up family and friends. 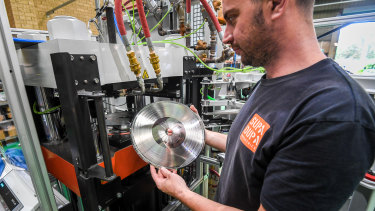 “You put your faith into something and do it,” says Lynch. “If we looked at a spreadsheet, it wouldn’t make sense.”

Roper adds, “the driving idea is to do it because it’s interesting, it feels important, and it’s fun”.

They found the warehouse and spent more dosh upgrading the power, gas, air-conditioning and fire safety controls. They assembled a team and hopped on Google Hangouts at 3am each night with the Canadians to compare notes and commission their new machines.

Another tricky moment was finding the actual vinyl compound. A firm in Altona came to the party (they also supply Zenith Records in Brunswick, who are manually pressing discs).

“There’s still some teething issues,” grins Lynch. “But it wasn’t as hard as we thought.”