Perhaps Ronnie Dunn, one half of mega duo Brooks and Dunn, proved country music understands inflation best with his song Cost of Livin’.

The song’s protagonist notes the price of gas is going up, his wages can’t keep up even though he works weekends and he’s had to ask his hard-worn parents for financial help. “The cost of livin’s high and goin’ up,” he laments. 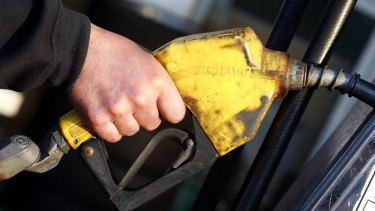 When the government’s temporary cut in fuel excise ends, it will push up the national inflation rate.Credit:James Davies

Dunn’s song could be the soundtrack to this week’s debate about the minimum wage and its intersection the cost of living, inflation and interest rates.

The election started with the cost of living relief package offered in the March 29 budget. The issue escalated when the Australian Bureau of Statistics revealed inflation had hit a 22-year high of 5.1 per cent just after Anzac Day.

And it reached fever pitch when the Reserve Bank lifted official interest rates this month, the first increase since 2010 and only the second time it has taken borrowing costs higher in an election campaign.

Enter Anthony Albanese’s off-the-cuff commentary that the minimum wage, currently being examined by the Fair Work Commission, should rise in line with inflation. 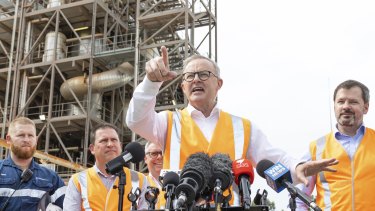 Anthony Albanese on the campaign trail in Gladstone on Thursday, advocating an increase in wages in line with inflation.Credit:Alex Ellinghausen

Well-paid economists and politicians weighed in on the “threat” posed by such an increase, ignoring how the commission’s previous 10 minimum wage determinations had failed to drive up prices. But there’s a reason for that disregard.

Through this period, the Reserve Bank was cutting interest rates to get the economy growing faster to get a bit of inflation.

Today there is one large difference that Albanese (and the Coalition) doesn’t want to mention.

A substantial increase in the minimum wage, without any productivity offsets, would be fed into an economy with an already-high inflation rate plus huge amounts of government stimulus.

The budget deficit alone is $80 billion this year with extra spending in the budget.

Last week, respected economists such as Steven Hamilton argued the budget’s measures, such as the cut in fuel excise and the supersized low and middle-income tax offset, had brought forward the Reserve Bank interest rate decision.

The end of the fuel excise cut at the end of September will add at least 0.25 percentage points to inflation. The tax offset will funnel more than $12 billion into the economy soon after July 1.

In two years’ time, when the (bipartisan) stage three tax cuts come into operation, people earning more than $200,000 will get a tax cut of $9000. According to the Reserve Bank’s forecasts, inflation will have just fallen back into its 2-3 per cent target range.

Those tax cuts dwarf in size this year’s tax offset and a 5.1 per cent pay increase for the 200,000 people on the minimum wage. By any measure, they will all add to inflation.

Scott Morrison has correctly noted that many of the nation’s cost pressures – skyrocketing oil prices and supply chain problems – are being driven by outside forces.

Ignored is the huge amount of money sitting in household bank accounts due to government COVID-19 stimulus measures. This $240 billion is, according to the government, Treasury and the Reserve Bank, an important “buffer” for consumers.

That $240 billion is also an avenue for households to deal with higher-priced goods, further bidding up their prices and adding to inflation.

And then there is the other key stimulus working its way through the economy – low interest rates.

Albanese says anything less than a 5.1 per cent increase in the minimum wage is a cut in real income for the nation’s lowest paid. It would be the second consecutive year for the low paid to go backwards in real terms.

But it comes with risks given the state of the economy.

Ronnie Dunn hails from Texas. The minimum wage there is $US7.25 or $10.45, the same it has been for a decade. Inflation, at 9 per cent, is hitting the state hard.

That cost of living pressure is worthy of another song.