Reporting of data on the number of Australian navy personnel who experienced a suicide-related event did not begin until 2017, despite the army keeping track as early as 2007.

In 2021, 100 air force personnel experienced a suicide-related event, the highest number across all three services since reporting began, according to data shown to Royal Commission into Defence and Veteran Suicide on Thursday. 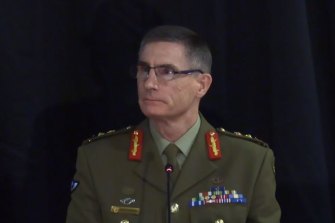 Chief of Defence Force Angus Campbell speaking at the Royal Commission into Defence and Veteran Suicide in Townsville.

The navy and air force did not begin recording suicide-related events until 2017 and 2015 respectively, despite increasing attention being paid to mental health issues during and after military life.

Australian Defence Force Chief Angus Campbell told the inquiry on Thursday that the delay of reporting showed the “progressive development of [defence’s] awareness across the force and the development of recording and databases to be able to show that”.

When pressed by counsel assisting Kevin Connor SC over navy data showing a jump from 30 suicide-related events in 2020 to 80 events last year, Campbell said there were a variety of potential interpretations.

“What I believe you are seeing is the potential for both an increased propensity to see a suicide-related event, you may be seeing an influence of the COVID-19 experience both nationally and within the military, and additionally I suspect you are also seeing that increased propensity to report, to seek assistance, to raise concerns,” Campbell said.

Campbell dismissed questions over the army’s lower numbers and reporting barriers, saying barriers were not distinct to one service.

This year to date, there have been 40 people in the navy, 28 in the army, and 25 in the air force who have experienced a suicide-related event.

When asked by Commissioner Peggy Brown AO whether defence had been slow to respond to suicide and suicidality, Campbell answered that the ADF had “addressed it in perhaps a disaggregated and federated way, rather than a single, integrated way”.

Campbell was also questioned on the Joint Transition Authority (JTA), which was designed to help personnel integrate into civilian life, a process associated with higher suicide risk.

He said the JTA was not operating at its full capability, but was progressing effectively and did not need more resources.

Connor suggested the JTA was “moving too slowly”, to which Campbell responded it was a “very complicated, disaggregated system”.

“It’s not as fast as I’d like but there needs to be a combination of quick fixes and rigor to realise the end result which is better for everybody,” Campbell said.

“Part of creating that best pathway is utilisation of the coordinated effort which they’re driving across the services, veterans affairs, central defence support providers, and it needs an expertise in those areas, so to over resource one part of the system will be to denude and delay the effect of another part of the system.”

In his statement to the commission, on the issue of whether the ADF was doing enough to reduce suicide and suicidality among current and former members, Campbell answered: “no”.

“Defence is doing a great deal, but as with many endeavours, there is always more to do,” he wrote.

Campbell also wrote more could be done in the transition period between leaving the ADF and up to five years after, adding there was “clearly more for defence to do” in cooperation with Department of Veterans’ Affairs, other agencies, community groups, research authorities “and the general population”.

Campbell also told commissioners he instructed his chief of staff in April to review the commonalities between 59 deaths that had been reported on by the Inspector-General. That review has yet to be finalised.