Home » Lifestyle » Welcome to the new Zillennial overlords. But try not to laugh at my jeans

Welcome to the new Zillennial overlords. But try not to laugh at my jeans

My greatest fear is being laughed at by a Zoomer. Some people fear death, others pain. I fear the face a 16-year-old makes when I mispronounce the word ‘cheugy’, which is a descriptor for the type of deeply uncool Millennial behaviour that constitutes my life.

Some weeks ago, Zoomers, also known as Gen Z (i.e those born after 1996) decreed that skinny jeans and side hair partings were no longer cool. I have been in a crippling state of self-consciousness ever since. What am I to do with the seven pairs of denim pants I own, all of which are tapered at the ankle? Must I throw them onto a fire? Yes, I must! 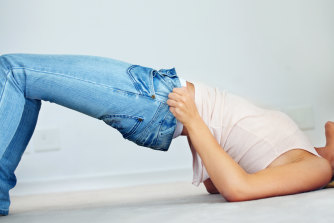 Skinny jeans are out, according to Zoomers.Credit:iStock

Zoomers have come of age. They have turned 21 and if trends are to be believed they will have celebrated by kicking back with some close friends, sous viding a steak and watching impossibly attractive strangers plug products in the form of dance on TikTok.

Why am I afraid of these people?

They probably eat more avocados than Millennials. They’ll never know the courage required to bounce on an open trampoline knowing full well it could dislodge one-to-several bones from their rightful place in the body at any given moment. They have no idea that every decade of their life henceforth will just be them complaining to their barista about their irritable bowel and musing out loud if Turkish delights are low FODMAP.

Zoomers know less than they think they know! But before you call me a bitter and increasingly out-of-touch geriatric Millennial with digestive issues – which I am – know this: Gen Z knows more than we think they know. A lot more. And they’re not afraid to fight for what they believe is right. 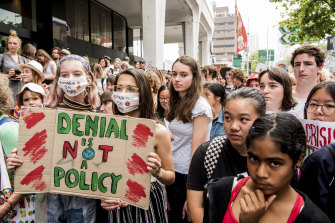 Zoomers have been leading the charge on sexism in schools and climate action.Credit:Steven Siewert

In Australia, Zoomers have been leading the charge on sexism in schools and climate action. This week up to 100 students at an Adelaide high school walked out of class to protest against what they say is the school’s sexist culture. They demanded an apology from those in charge over their lack of action and a revised school-wide approach to sex education. I watched this unfold like a proud aunt [insert cheugy cry-face emoji here].

Also this week in the US, a Texan high school valedictorian went off-script during a speech to attack her state’s abortion ban, a move that went viral on social media. The Pew Research Centre found American Gen Zers to be progressive, educated, pro-government and more accepting of diverse ethnicities, sexualities and genders. They are significantly more comfortable than other generations (including Millennials) with using gender-neutral pronouns for example.

They have been dealt a heavy blow by the pandemic and will be forced to shoulder the debt burden in an increasingly uncertain world that’s dealing with a climate emergency and is run by people who like to swim in a vault full of their own franking credits.

And who will the Zoomers turn to for aid and understanding?

The ever-hastening rate of technological change is leading to an increasing cultural disconnect between and among the generations and this is why we Millennials have a key role to play here. We can dismiss Zoomers, with their TikTok-approved middle-parts and inability to take down detailed phone messages, but their rise is inevitable. Best we make room for a bolder, more open generation that’s seeking to make the world a better place for everyone. Saccharine, I know.

But my plan is to add strength to their armour even if they do make fun of my jeans.

Jan Fran is a writer and presenter.

New, the, to, welcome, Zillennial
Celebrities