Ross Garnaut has slammed the federal government’s $600 million backing of a new gas-fired plant as a “waste of money” and likened it to the exercise of burying money and asking the unemployed to dig it up as a way of keeping them productive.

The eminent Australian economist and author of the Garnaut Climate Change Review made the comments to opposition climate spokesman Chris Bowen and former Labor candidate Sam Crosby on their podcast Rekindling Hope. 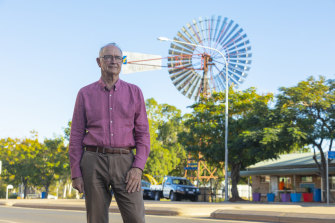 Last week, the federal government said it would instruct the Commonwealth-owned Snowy Hydro company to build a $600 million gas-fired power plant in the NSW Hunter Valley.

The 660-megawatt plant will operate just two per cent of the time and employ just 10 full-time workers.

The government insists the power plant “is desperately needed” and will “keep the lights on”. It says the peaker plant is needed to put “downward pressure” on power bills as the 1000 megawatt Liddell power plant, also in the Hunter Valley, comes offline in 2023.

But this has been rejected by industry and market organisations who say the gap in the market will only be 150 megawatts and have questioned the ability of a new gas power plant to reduce power bills.

Professor Garnaut likened the government’s policy of funding “redundant” energy capacity to economist John Maynard Keynes banknote theory, in which the economist argued that in times of high unemployment, it is better for governments to bury banknotes and get people to dig them up compared to doing nothing at all as a way of contributing to the economy.

“Anything else you do with the money would be more valuable than redundant capacity, we’ve got huge amounts of surplus gas generation in Australia.

“Putting more in just increases excess capacity – in one sense it’s a waste of $600 million but at a time when we need increased [economic] demand, the pity is not that the government’s borrowing this money to spend, the pity is that it’s not being spent on anything productive,” he said.

The federal government announced the new gas-fired plant on the same day the International Energy Agency said there should be no new investments in fossil fuels if global net zero goals were to be achieved.

A spokesman for Energy and Emissions Reduction minister Angus Taylor insisted the closure of the Liddell plant posed an “unacceptable risk”.

“It was always our preference the private sector stepped up to deliver. But if they didn’t, the government would step in,” the spokesman said.

“Many experts and commentators have expressed a view on this project.”

Professor Garnaut authored the 2008 Garnaut Review and updated it in 2011 informing the carbon pricing policies the Rudd government failed to legislate and the Gillard government did pass that was later repealed by Tony Abbott.

He said since writing his review, the cost of Australia moving to net zero had been greatly reduced.

“The radical reduction in the cost of renewable energy changes everything and it gives Australia huge advantages in the zero-emissions economy.

“It wasn’t like that 12 years ago because the cost of moving to net-zero emissions was still high.

“Now we’ll be richer and the cost of the living will be lower the quicker we make the movement, that’s the big change.”

But he said the political will to tackle climate change existed in every country “except Australia.” Prime Minister Scott Morrison has refused to set a net zero target despite pressure from his British counterpart Boris Johnson who is hosting the next round of UN climate talks in Glasgow.

However, speaking to the same podcast, the former leader of the British Labour party Ed Miliband, who is also the opposition’s climate spokesman, said he doubted the talks will be as successful as the breakthrough achieved in Paris.

He said countries would need to halve their current emissions to limit warming to 1.5 degrees.

“I fear it won’t be the breakthrough that Paris was,” he said. “We probably won’t get all the way there to 1.5 degrees in Glasgow but we’ve got to push as hard as we can to keep 1.5 degrees alive,” he said.