Home » Lifestyle » What is the new dating trend 'pocketing'

What is the new dating trend 'pocketing'

Are YOU being ‘pocketed?’: Dating trend that sees people refuse to post photos or engage with their partner on social media is a ‘power play’, experts say (but it doesn’t always mean they’re a cheat)

With cuffing season in full swing, singletons everywhere will be coupling up with new partners ready to flaunt their budding relationships on Instagram.

But if you’ve noticed your partner is hesitant to show you off to their friends and family online, you could be victim of ‘pocketing’ – where a person refuses to acknowledge their relationship on social media.

The term means a new partner is actively avoiding acknowledging your existence online and is going out of their way not to introduce you to any of their friends and family.

While it doesn’t necessarily mean that the person is cheating, relationship expert at eharmony Rachael Lloyd says those who do it often want to reap the benefits of a relationship while also living a ‘single life online’.

For example the person ‘pocketing’ their partner may want to like certain photographs or send messages to other social media users without them knowing they’re in a relationship. 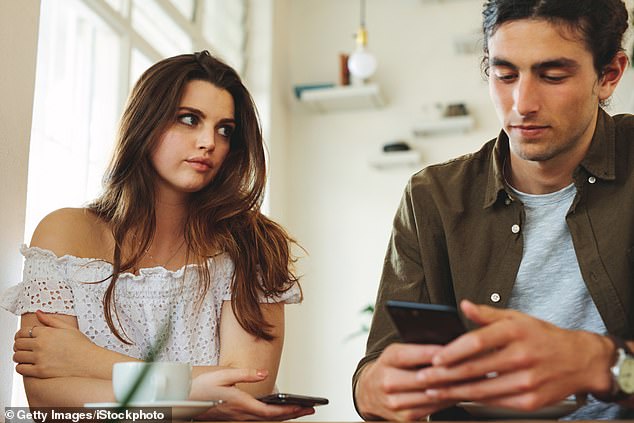 Relationship expert at eharmony Rachael Lloyd claimed those who ‘pocket’ their partners are doing so as a ‘power play’ and will often want to reap the benefits of a relationship while also living a single life online. Stock image

Signs that you could be being ‘pocketed’ include your partner never replying to your social media comments, removing your tagged pictures from their profile and never adding your tagged story to their account.

Alex Mellor-Brook, co-founder of dating agency Select Personal Introductions, said this trend is particularly noticeable around the Christmas period, because those in budding relationships will be expecting to meet their new partner’s loved ones.

Meanwhile Elaine Parker, dating expert and CEO of Safer Date claimed that this can also be a sign of a controlling partner who is ‘insecure or jealous’ about their other half.

Here, Femail reveals the tell-tell signs of a partner ‘pocketing’ you, and what to do if you suspect your partner may not be as committed as you think.

Rachael said: ‘As the name suggests, pocketing is when one partner keeps their significant other in their ‘pocket’ – hidden out of view.

‘In today’s context it refers to keeping a partner hidden on social media platforms, be it neglecting to share pictures of the relationship, or neglecting to tag each other in posts.’

From Bubbling to Hesidating: The top dating trends of 2022

Plenty of Fish has revealed the dating trends set to go viral in 2022:

Moderna Love: Considering COVID-19 vaccination status, including which shot received, as a desirable trait. With over a third (37%) of singles admitting to this it seems there’s another reason to get jabbed!

Bubbling: Being unsure about the physical boundaries that are acceptable due to Covid-19, such as whether to hug, handshake, or wave at your date. Now there’s nerves, excitement AND physical faux pas to consider on dates with 58% experiencing this.

Hesidating: Feeling indifferent about dating, unsure if you want to date seriously or casually because life in general is so uncertain right now. A fling or full-blown commitment? Who knows, as 58% of singles are currently hesidating.

Piers Pressure: Walking out on your date because they didn’t agree with your opinion is a common dating disaster with 50% knowing someone who has done this. Advice to avoid? Don’t bring up the pandemic, money or politics.

Greal Deal: Fancying someone solely for their profession. While Jack Grealish stole the hearts of the nation this summer, a quarter (25%) of all singles also know how it feels to be considered attractive for their chosen career path.

Transformate-ing: Morphing into your counterpart by dressing and acting like them. Thanks to a certain unlikely celeb couple (Kravis, we’re looking at you) almost one in five (18%) have had their date play copycat.

Staycationing: Finding a romantic connection with someone who has been in your life for a long time has been the case for 23% of singles. Forget the holidays, maybe love is all you need after all.

Duking: Being caught up in a whirlwind romance full of drama. 46% know someone who has done this a la Duke of Hastings and Daphne Bridgerton from Netflix’s Bridgerton. .

Pinged Off: When your friends warn you about the red flags when you’re dating someone new but decide to ignore them. A notorious player? Talks about their ex? Just bad vibes? 42% of hopeless romantics have opted to ignore them all.

Gambit’ing: Taking a strategic and calculated approach to the dating game like a game of chess. Almost a quarter (24%) know someone who has done this. Whether it’s multiple dates a week or same dates, or a different person – they are masters of the dating game.

Communidating: Using dating apps and social media to make friends and connections, not just for dating and intimate relationships is popular among 40% of singles. The more friends the merrier, right?

Elaine added: ‘It makes you question – are they ashamed? Are they secretly dating someone else?

‘As the term goes, being in someone’s ‘pocket’ can cause heaps of anxiety and stress and make you feel as if the relationship isn’t serious to them.

Alex claimed that the trend becomes more prominent at Christmas, adding: ‘It’s the time of year when we expect to get invited to meet our new other half’s friends and family, those closest to your new date, except you aren’t.

‘If this happens, it means you’ve been pocketed and you only get brought out when they want or need your company – they aren’t going to make you a full part of their life.’

WHAT ARE THE SIGNS YOU’RE BEING POCKETED?

‘One sure fire way to recognise you’re being pocketed is looking at your partner’s behaviour on social media’, said Rachael.

‘If they don’t share pictures you’ve tagged them in on your Instagram story, don’t reply to comments, or never share any pictures of the two of you together, it makes a strong case that you may have been pocketed.’

WHY DO PEOPLE DO IT?

‘At its core, pocketing is power play’,said Rachael. ‘The ‘pocketer’ holds all the power by refusing to recognise your existence on social media.

‘It’s likely that if they’re not acknowledging the relationship online, they’re only partially acknowledging it in real life, too.

‘For instance, they may not introduce you to their close friends or family, even after several months of dating. In doing this, they can continue to live out a single life online, whilst still reaping the benefits of being coupled in real life.’

Elaine agreed: ‘This kind of controlling behaviour may happen due to past experiences and amplified if they feel a level of insecurity or jealousy towards their other half.

‘They may also fear judgement by others, whether that’s on social media or by friends and family.’

Alex added: ‘It could be a sign that your partner is cautious due to past relationship experiences and they don’t want to take risks with intimacy, so it’s not always a wholly negative behaviour.

‘But, if your new love interest doesn’t start to warm to you after a couple of months, it’s probably time to consider if they really are interested in a long-term relationship.’

WHAT SHOULD YOU DO IF YOU’RE BEING ‘POCKETED’?

‘Pocketing can have a really detrimental effect on the pocketed person’s self-esteem levels and erode the likelihood of a healthy, meaningful relationship’, said Rachael.

‘It forces them to wonder if they’re important enough, if their partner is embarrassed by their looks, or if they’re more invested in the relationship than their significant other.

‘In fact, recent research from eharmony has revealed that fear of rejection and appearance rank as top concerns when it comes to dating, and being pocketed would definitely contribute to these fears.

‘If you recognise that it’s happening to you, the best thing to do is communicate with your partner.  At the end of the day, good communication skills are fundamental to long-term compatibility along with the ability to resolve conflicts together.

If you attempt to discuss the issue, and your partner becomes hostile or overly dismissive, this could be a sign they’re not in it for the long haul. Then it’s down to you to decide whether this person is really worth your time, love and attention.

Elaine agreed: ‘The best thing to do is to approach your partner. Have an open and honest conversation about the way you’re feeling. If they don’t open up or get incredibly defensive, it may be time to re-evaluate the relationship and decide if it is time for a change.’