You can tell a bit about a collective mood from internet memes.

Berlin-based author Konstantin Richter, who was stranded in New Zealand during its drastic seven-week coronavirus lockdown, wrote in Politico of a joke doing the rounds: "God was spotted in New Zealand. 'What are you doing in Aotearoa, God?' 'Working from home, bro!' " 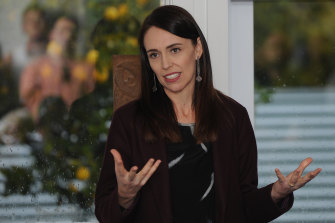 New Zealand Prime Minister Jacinda Ardern is riding high in the polls after her handling of the COVID-19 crisis.Credit:Getty Images

Melbourne lockdown memes are comparatively glum: "COVID and Australia is like the Spice Girls. Everyone is doing their bit but Victoria is ruining it for everybody."

Support for New Zealand Prime Minister Jacinda Ardern is stratospheric following the country’s elimination of the virus from the community. With just weeks until the September election, Labour has soared to 60.9 per cent in polls under Ms Ardern’s leadership, the highest in polling history.

"This is the second lockdown and it appears it may have been caused by government incompetence," said Nick Economou, a senior lecturer in Australian politics at Monash University.

"When Melburnians can see the rest of the country going out to dinner or out to the football, it’s hard to get away from the impression that the government has failed."

Dr Economou believes if stage four works and it is all over in six weeks, the government will recover.

"If it works, Daniel Andrews will come out a hero and [Chief Health Officer] Brett Sutton will get an Order of Australia," Dr Economou said. "But if this fails, what next? The experiment with the housing commission tower where the full arm of the law is used to force you to stay in your house?"

Barbara Barbosa Neves, a senior lecturer in sociology at Monash University, works with older people living alone. She says the first lockdown heightened their experiences of isolation and loneliness.

She said some participants in her study had suicidal ideations, with some internalising the ageist debate about whether the focus should be on the economy and the future, rather than saving older people’s lives.

"There is a sense they are disposable, people are blaming them for Victoria locking down because of older people being more vulnerable."

Even at the height of lockdown, New Zealanders who lived alone were allowed to visit and socialise with another person or couple isolating in the same neighbourhood, as long as neither interacted with anyone else.

This was considered particularly important for older people. Dr Barbosa Neves said she was unsure if this would work in Victoria, but the state needed to be more proactive in understanding the impact of lockdown on older people's mental health.

Christine Grove, an educational pyschologist at Monash University, says she hopes Australia will learn from New Zealand and Norway and hold a press conference for children, to answer their questions about COVID-19.

She said Ms Ardern – who encourages children to write to her – noticed a lot of questions about the coronavirus such as "Am I going to die?" and "Why can’t I visit my grandparents?"

"I was hoping Victoria might have done it in the first lockdown," Dr Grove said. "Children are picking up their parents’ cues about stress, but their questions aren’t being addressed. And the press conference in New Zealand modelled how parents can talk about COVID-19 with their kids."

John Vaz, a senior lecturer at Monash Business School, said New Zealand had taken a lot of severe pain in the short term, with shopping centres closed and even takeaway food banned.

Restrictions were lifted in June, although the borders remain closed.

Dr Vaz said Victoria’s more cautious approach to minimise damage to the economy had led to a more prolonged shutdown.

He said it had defied logic to allow shopping centres to remain open during stage three when gatherings were restricted.

"In my opinion, we should have probably gone with the New Zealand model," Dr Vaz said.

"Economically speaking, we have embedded more pain than we needed to over a longer period, thinking it was desirable to keep business ticking along."

Mr Andrews said the state had taken a uniquely "Australian and Victorian approach".

"If you look at what New Zealand did, they went a fair bit further than this," he said. "Look, I’m not here to run a commentary on what other countries or states have done. We’ve designed something that we think will work here in Victoria given the circumstances we face."

Ms Ardern was quoted in The Guardian saying she had not spoken recently to Mr Andrews.

"Those in Australia that we've had contact with do certainly know that we are available at any point to talk through all lessons learnt," she was quoted as saying on Radio NZ.

"Because we've all learnt them and we are all still learning."

If you or anyone you know needs support call Lifeline on 131 114, or Beyond Blue's coronavirus mental wellbeing support service on 1800 512 348.

Can, From, learn, N, Victoria, What
Celebrities